As a gamer there’s so much we enjoy about our down time. It’s the adrenaline rush of taking down a hard opponent after trial and era. Or achieving that coveted goal through strategy and a little luck. Or developing an idiosyncratic twist on achieving said goals, a signature method of playing if you will. All in all it leads to a gamer experience that is fulfilling and entertaining.

But alas it’s not all power flowers and roses. There are a few occurring things as gamers that make us a tad bit uneasy time and again. Some will understand. A lot won’t. So here is the #TAP10 of issues us Gamers have to go through every now and again when we aren’t button bashing our way to victory:

As kids we’ve done it. Collect and have an unhealthy emotional attachment to stuff. Coins, shiny trinkets, stones, toys… we collected them and shoved them in a box for safe keeping. And every now and then we took that box out to go over those little trinkets for a bit of a nostalgia trip. So you know that that little box is nothing more than ‘works’ for your nostalgia high.

For kids, hoarding stuff is expected. But as you grow in age your supposed to be over that a bit. But in gaming, digital hoarding isn’t seen as a OCD / psychological problem. But in some cases, it probably should be. In Destiny, you have a vault where you are encouraged to find and keep 100’s of weapons. Link often runs off hoarding chickens, gems or whatever the fuck he does on those side mission.

You collect everything and attach value to them, and soon your digital bounty grows plentiful. But of course that’s not enough, so you play longer hours to gain more items you can add to your collection, fufiling that token pleasure centre of the brain. Collecting cars for your digital garages, gems and rare items for your war chests, herbs for you potions and money for your vault.And you will play long hours and forsake a lot friends to get to that next level of gaming supremacy. Until you realise you need more. Lots more.

You basically get rewarded for borderline OCD behaviour.

We are not saying you have a problem. But if we were, would you really have any grounds to contend it?

Yeah, there’s violence in the media. And there will always be a debate whether or not exposure to depictions of game violence leads to actual gamer violence. But there was that research that claimed it was PC decriers that keep saying video games cause violence is actually what causes gamers to be violent.

But whether you stand on the side of desensitisation or catharsis, in the end when you think about what is being depicted in a game sequence and if it were to be performed in real life, you’d be one sick serial killer. Your screen name would be your moniker, killer666_devil.

At times you’ll be shooting people’s heads clean off, which is pretty tame, compared to COD’s ‘No Russian’ scene that had you cut down an airport filled of innocent passengers with automatic gunfire, every kill scene in Manhunt and Hatred and every Mortal Kombat Fatality sequence.
And this is Ed Boon and the team holding back.

And often its never the violent act that is committed that stirs the PC people up, but the context. Hatred can contest to that

The bloodletting can get a bit too much sometimes, especially when playing for long hours. But it’s not like we’re going to snap and start murdering our ex-girlfriend’s pets. We can suppress the urges. Of course I am just kidding.

Sex is just tops. And so are video games, But when the two plan on hooking up it becomes quite the awkward situation, pretty much like a fumbling teen’s first time. Our #TAP10 sexy sex time is proof that sex in video games is slightly awkward and clumsy at best, and disturbing at worse. Not exactly cool either when family members walk in while you’re playing as Trevor in GTA V, standing in a strip club, making it rain on ’em strippers or getting head in a car from a hooker. Feels like that time you got caught watching porn. All the while trying to explain it away like “it’s part of a mission”. Weirdo.

B-list movies where the acting and voice are absolutely poor irritates the hell out of any decent consumer of entertainment. It is no different for video games. When casting the right voice meets intense, involved gameplay, it is one of the most beautiful experiences we can partake in as gamers. But my god there are some games that just get it wrong. Resident Evil and Barry Burton-cheese was so over-the-top bad it was hilariously good.

Yes, Barry. We are talking about you and your “Jill Sandwich”.

It happens to the best of us. No, not you ‘limpy’. We are talking about gamer performance anxiety. It’s stupid really. Call it the minor jitters, or just plain nervousness. I get slightly anxious playing any game for the first time. Because subconsciously questions swirl around in my head: Am I good enough? Can I complete this campaign on hard? Please let this game not ruin the franchise for me.

It is even worse when playing online: Can I hold my own? Will I make a stupid move and fuck up a whole team’s effort? Will I make the top rank of player in my lobby?

Don’t get me wrong. I’m not some worry-wart that second guesses every single decision. But time and again the questions do creep in when I am playing a new game I have not played before. Especially horror / thriller games. How about just giving me a panic attack to get me over it all and call it a day.

Doing the same thing over and over can do anyone’s head in. It is why your job sucks sooo bad. But alas, even the best of times, some video games can seem like an exercise in button bashing and repetitive displays of banality. It is bound to happen, as gaming can be limited in what you can do. I mean what else can you do in an FPS but shoot? Or there is so much you can do in a platformer apart from jump and collect coins like a homeless bearded sewer man. Not to mention the set amount of combinations available via the physicality of the controller.

So unless the game switches up its context or introduces wider maps from time to time, you will notice that playing certain games feels like your clocking in and out of checkpoint shifts rather than playing out an enthralling video game.

Playing online with other gamers is what has enabled the world to enjoy intense, enthralling gameplay experiences that pretty much goes unrivalled to this today. But if game lobbies has taught us anything of value is that the world is filled with ignorant racist trolling c*ntholes that use Xbox Live as a platform to beam pure ignorance via fibre optic cable.

From people dropping random offensive misspelled messages in your inbox, to screaming epithets down their mic which also inadvertently, has you dealing with even more annoying feedback, crappy background music and poor use of language. Long story short, gamers just suck sometimes and these empty barrels need to be schooled in the art of being bludgeoned with a crowbar and learn some gamer etiquette.

Time is truly the most valuable commodity for any goal-driven individual. But as a gamer, it gets really easy to throw away all your time and task management skills to the wayside.

Maybe it is all the varied tasks begging to be completed. Maybe it is because you have the memory-span of a goldfish. Who knows. But with so much going on with main missions and side missions in video games, it can get a bit easy to get sidetracked. So while technically gamers are more likely to have greater spatial awareness than non-gamers, gamers’ll probably still spend more time traversing a maze because they will purposely explore every path and dead end in the hope of levelling up some XP.

Football players pull muscles, dislocate shoulders and injure knees. Our injuries as gamers may not be as life threatening but they are still existent. A heavy game sessions will leave us with wrists that sound like a cement mixer when rotated. Not to mention thumbs that feel like you got arrested a trillion times and had to give your fingerprints for each offence.

And when it comes to Repetitive Strain Injuries, we are not just talking about console and PCs. Recently in the news a player who went on a Candy Crush Saga marathon ended up rupturing a tendon in his finger. Just remember to take breaks now and again. It’s why we have pause buttons ladies and gents.

True story. In the underground, ready to take a train to Liverpool Street. I reached the platform at Embankment and had to wait 3 minutes. Fine. I turned my head to check the time again when the corner of my eyes caught an emergency exit sign. Suddenly my internal voice spoke and said “I want to go to there”. And I then inexplicably took a step in that direction. 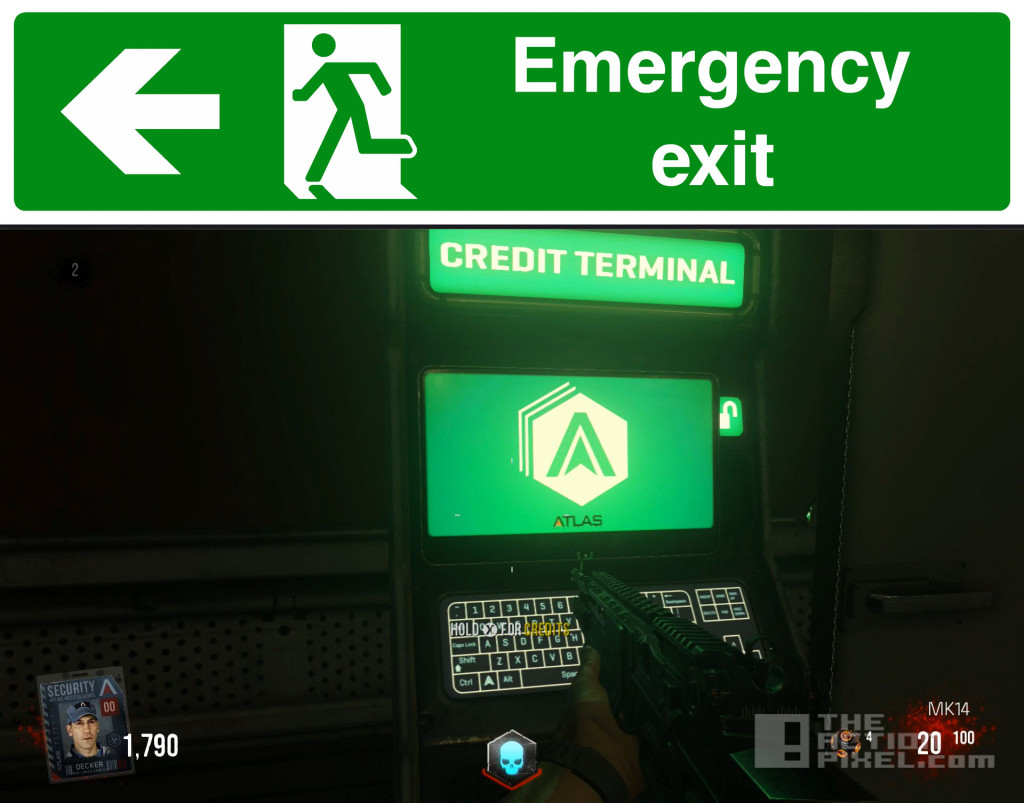 At this point in time, I was playing COD: Advanced Warfare Zombies very heavily. And in the game, there are these consoles littered throughout the “Infection” game map that allow you to get free credits to buy and upgrade weapons. And how do you know when these console interfaces are ready to put out free credit? The screen turns from black / red to green with white text. Like that of the Emergency Exit sign.

And if that’s not bad enough, how about the flash-thought you get seeing a cop after playing GTA for a couple hours straight day in and out, or that feeling you get behind a wheel when an idiot decides to cut you off in traffic after playing Forza or something? Let’s be honest. We all know for a fact that none of those thoughts are healthy and honestly society would probably have you arrested if they could ‘Professor X’ your brains.

“So what gamer issues do you come across online or in campaign. Let’s know in the comment section”