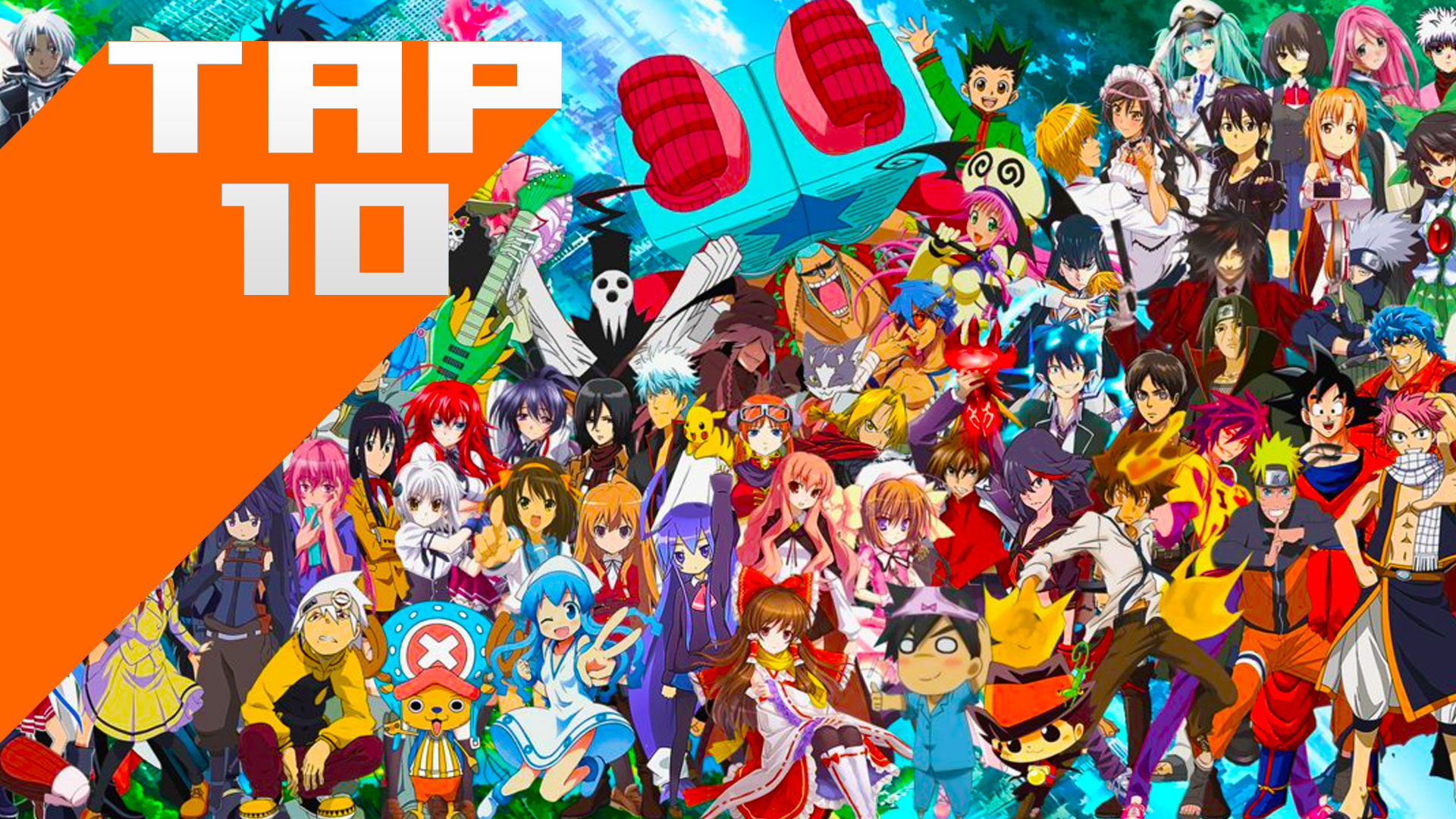 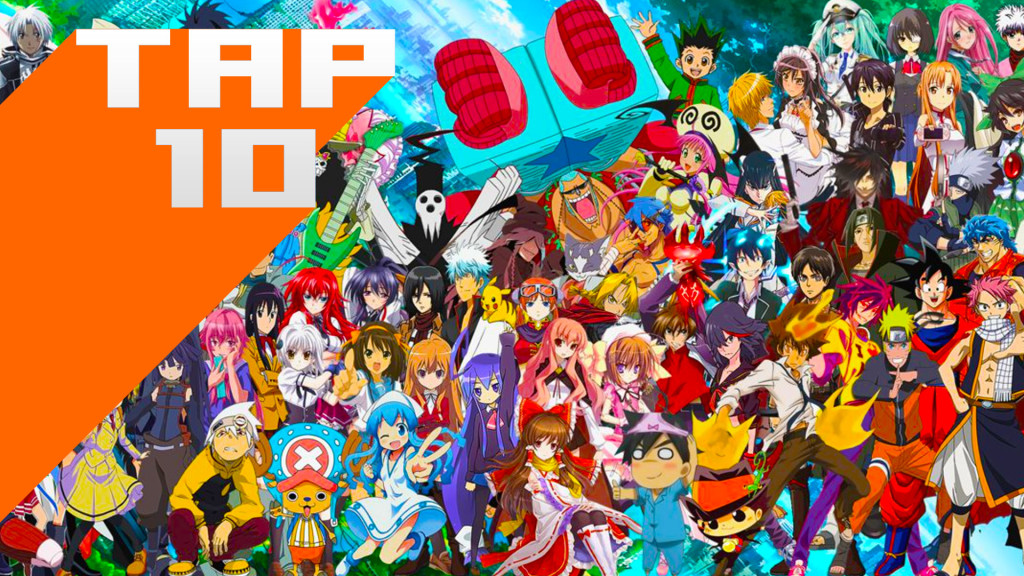 Anime is still by far one of the greatest forms of animation to exist on this known planet that still manages to send me into fanatic fits of childish giddiness. And for good reason. Litheness of motion, sufficient adult plots merged effortless sometimes with level 11 goofiness and absurdity that should have creators sectioned off in the loony bin.

And the reason anime can take us to that special place is there are recurring elements that appear from the first frame to the last that remind us we are in for a visual treat of world cinema. So this here #TAP10 takes a look at the little Anime tropes that we have come to appreciate and lends itself to a bespoke filmic experience not akin to any other form of media: 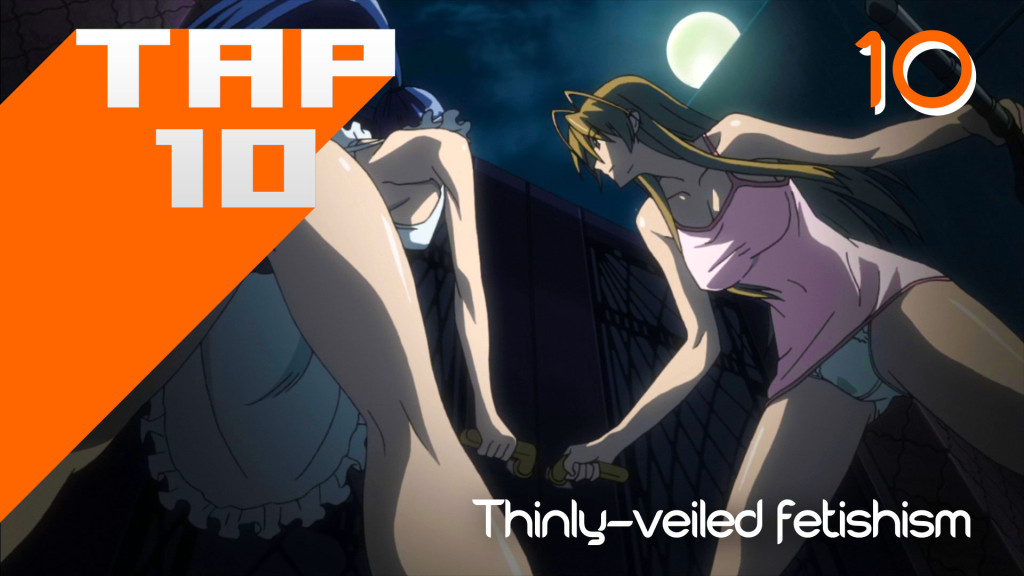 Watch anime long enough, you slowly begin to see while there are tame titles, they do sneak in an odd fetish-esque scene here and there. Some are subtle, most are tame but obvious. The rest will make you blush. Indubitably, if you are an anime fan, you have come across those things that will have you blushing with your pants down your ankles; upskirt, cuckolding, panties, feet, to the more unsettling- you name it. 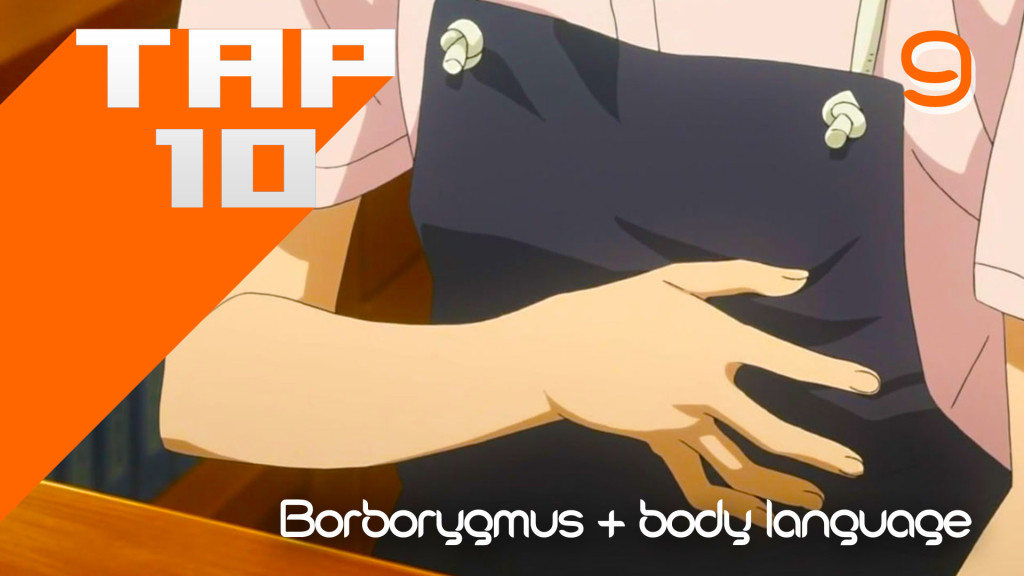 It usually begins with a character politely declining food offered or stubbornly scoffing away a morsel being given to them by a perceived adversary. Their immediate body language and words say “uh-uh. Nooo Thank You”, but then they are exposed for the liars they are. Their stomach growls, you know, that churning sludgy echoey sound you get from your empty cavern of a stomach that translates as “Get in my belleeeh!”

Then the character, embarrassed by their tummy revealing their true desire, double-arm clutches their stomach as if they had an instantaneous miscarriage, nervously blushing and laughing it off as if it were nothing but a passing motorcyclist.

Food. Apparently we need the stuff to survive. No shame in satisfying the belly hunger pains dudes and dudettes.

And it’s not just the rumblings, but other body functions we otherwise don’t think about. The ‘pulsing vein’ in the forehead signifying annoyance. That ‘large bead of sweat’ that comes from embarrassment. What ever it is, anime characters are forever expressive, and their mannerisms tell us a lot about them without one iota of a muttered word or phrase. 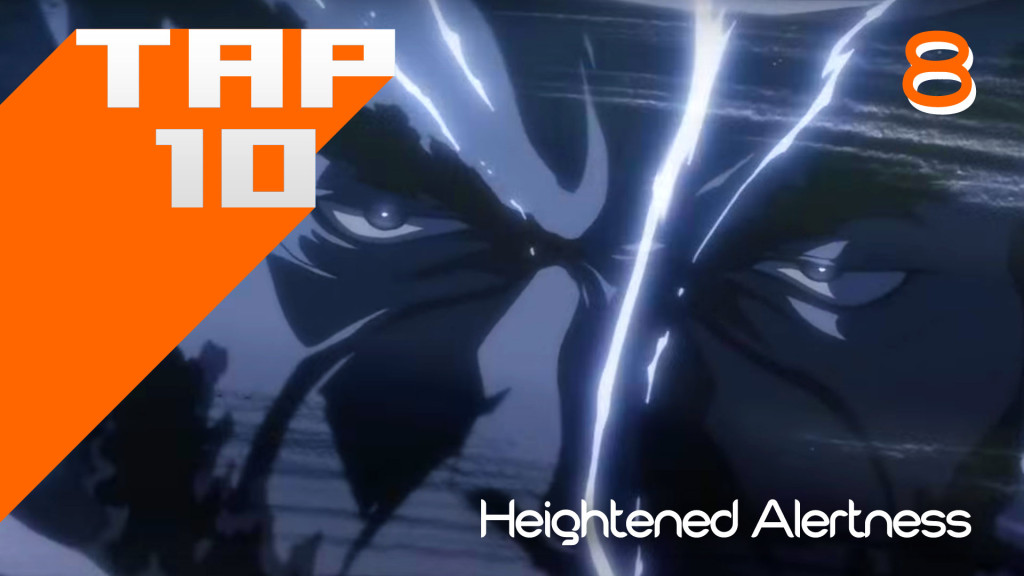 You usually see this in the infamously intense battles you get in anime. Before Matrix‘s so-called bullet-time, there was anime! And when those ever-so-sexy fight scenes where happening at light-speed, there is that one character with reflexes that would make a pussycat jealous.

Something fatal is about to strike them: a plethora of shonen blades from a rear sneak attack, or laser cannons fired from godly mechas. All to spell sure death for the protagonist. But our warrior is above it all. In between the fractions of seconds, the hero senses something is wrong, and it’s represented on screen like a flash of lighting, a tesla coil between suspicious, narrowed eyes that mimic the firing of synapses. Fight or flight mechanism. Parry or strike. It is often a scene that lasts less than a second, but adds such uniqueness to anime features right before an explosive visual delight. 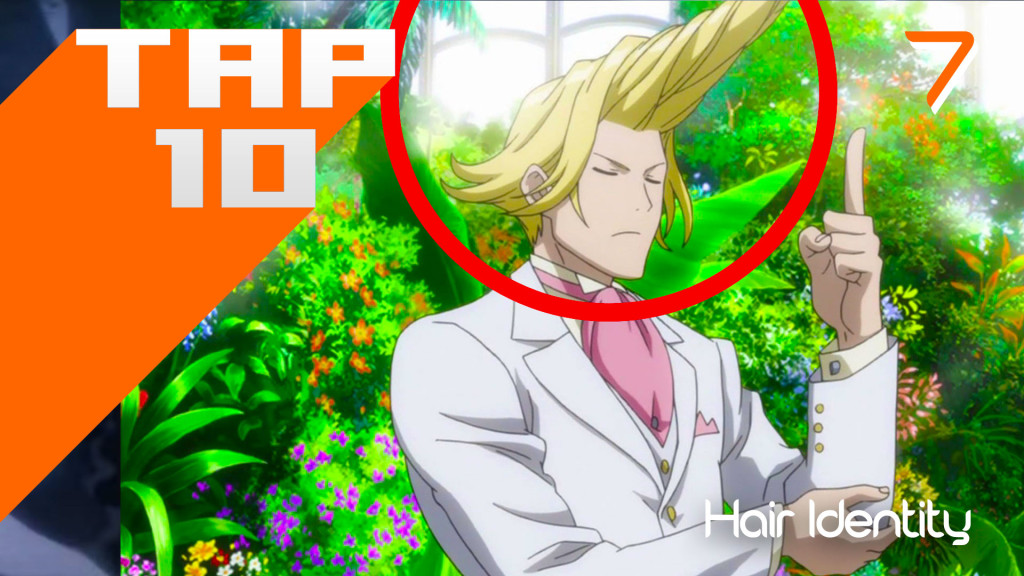 This is as much a defining element of anime and by extension comics and sequential art. When you have a certain amount of characters that often have to be redrawn again and again, its easy for characters to start looking the same if they had the same hair colour, skin complexion and the like. So often you’ll find anime goes to extremes to make sure their characters stand out different from the rest. Clothes often is one way to inform identity, but nothing beats a crazy hair-do. Whether it’s hair spikes standing on-end as if held up by all the world’s hair gel, invisible cherubs and scaffolding, or going blonde or afro, or purple or orange, the hair becomes a idiosyncratic signature of individuality that makes him or her stand out as titans among the sea of anime content in existence.

Whether it is Afro Samurai’s gravity-defying ‘fro, Vegeta’s spike-converging fan of hair balance on one big forehead, or the salt-pepper emo hair of Black Jack, or the mullet/pigtail-y purple locks of Motoko Kusanagi, hair becomes more of a resounding statement of a character’s own individuality. 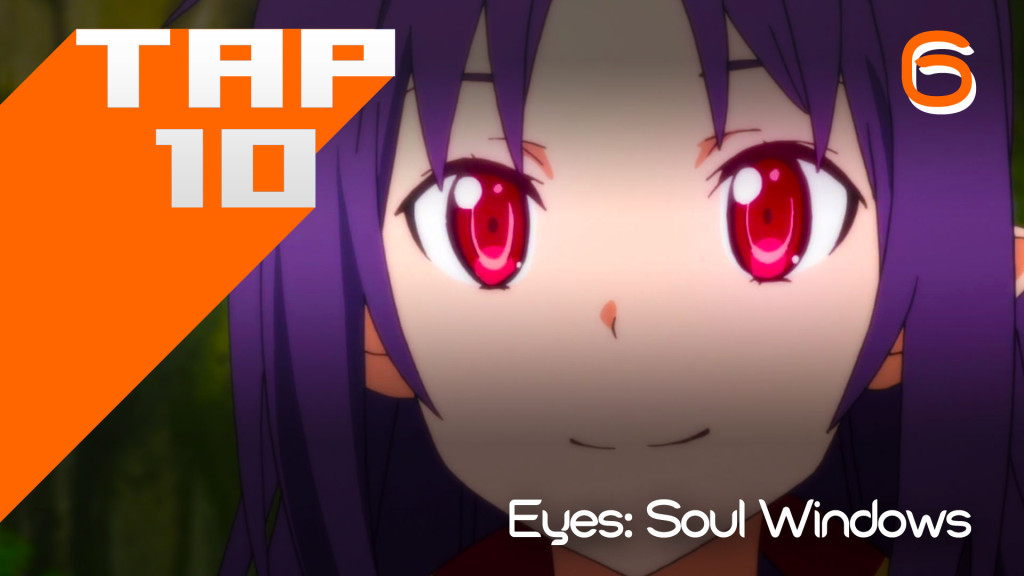 They often say eyes are the windows to the soul. And this can’t be any more true than in anime. To the point it often literally translates into how character eyes are depicted. Heroes, the good guys pure in heart and intention are often drawn with full big eyes and pupils, as if to give fans a clear line of sight into their very souls. Contrarily, the evil, nefarious type (or at least the mysterious sorts [good or bad]) often are giving narrow beady eyes. They obviously got something to hide. Just enough light to hit the retina. That’s all that’s getting in. 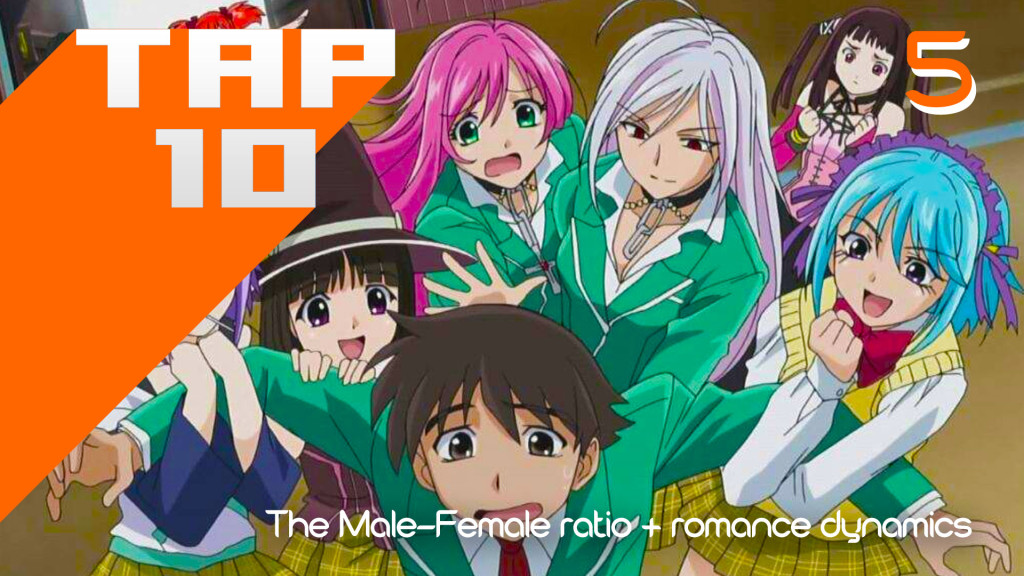 Everyone likes to be desirable. It’s why guys go to the gym and girls wear make-up. Or vice-versa. We don’t judge. But in anime, you’ll often find the forever desirable male protagonist is often courted by sexually-available females. They’ll laugh at his stupid jokes, blush at the slightest comment and find themselves thrown into his arms (yeah, you falling and me catching you… sure an accident… we’ll play along).

Sexist… maybe. But don’t worry the male protagonist in this scenario is so clueless that he is the love quarry of several available women that it actually hurts to see him miss such dead giveaway cues to lean in for a kiss, ask to go steady. Whether it’s Sidonia or Sword Art Online, there just seems to be be too many buns to the one hotdog. Which is weird as every party I ever went to it was exactly the opposite.

There’s also reversed-harem, where more than a few guys vie for the attention of one girl. And she tends to be that hot girl who’s too modest for her own good.

And when you consider the complexities of anime love and different character types, the dynamics get even more interesting. 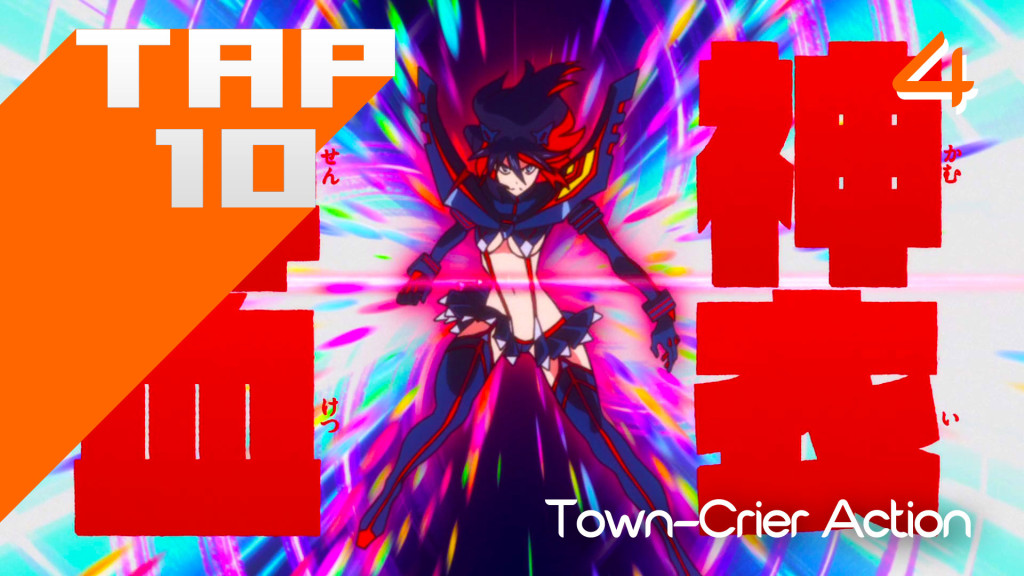 Maybe it’s a nod to the metaphysical concept of speaking things into existence; the idea preceding the word preceding action. Or maybe it just sounds cool as shit to let your enemy know he’s about to get the business and there is pretty much nothing they can do to thwart it. In any case, if your anime character has a special move or attack, best believe they’ll be shouting it out at the top of their lungs. How else are they supposed to show off their skill?

Usually accompanied by a surreal, fantastical sequence, almost always involving some form of a power-up or mustering of strength, these sequences tend to be hugely entertaining and take a lot from traditional Japanese Kung Fu flicks. It’s also about the time shit gets really real. 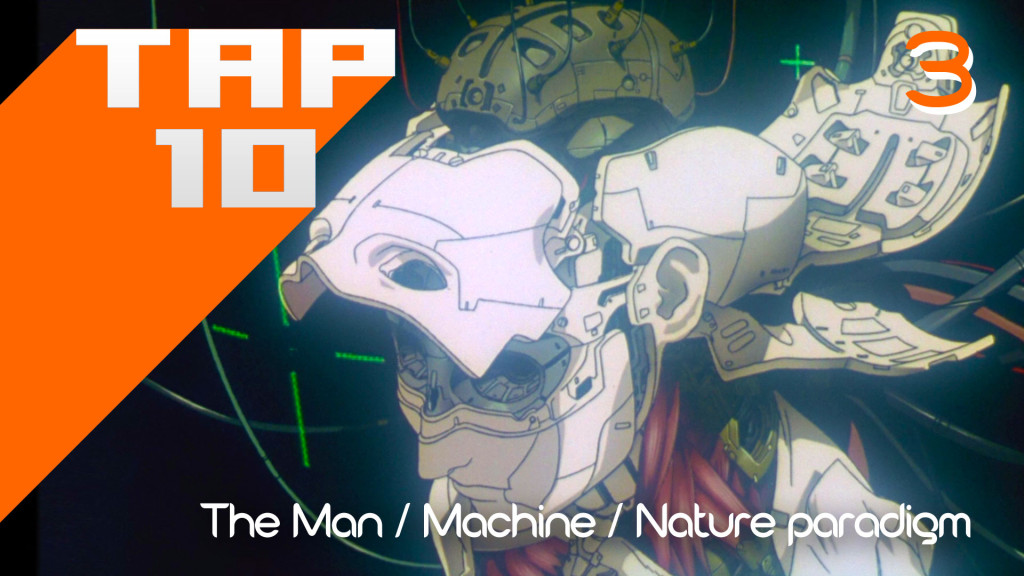 This is the resounding theme in every great anime (hell, film even). It’s man vs machine. Or man vs. nature. Or man and machine vs nature. Or man and nature vs. man and machine. Usually variations of the three. All of which detail the intricate, precarious relationship and conflict between our existences. In Final Fantasy VII: Advent Children‘s narrative, the detailed struggle in the backdrop is almost an environmental one, nature purging the disease that is man in response to them disrupting and corrupting the natural resources of the world. Then you have humanity and nature being etched away as technology is made the new god of man in anime like Ghost In The Shell and Appleseed. Or nature fighting back against the transgressions of man in films like Princess Mononoke. Or man trying to survive the cruelty of abominable nature in the form of Titans in Attack On Titan.

And effectively what this paradigm often speaks to is the potentially volatile nature of the human state and how important it is that we realise the continuation of our world depends on us finding equilibrium on all plains. 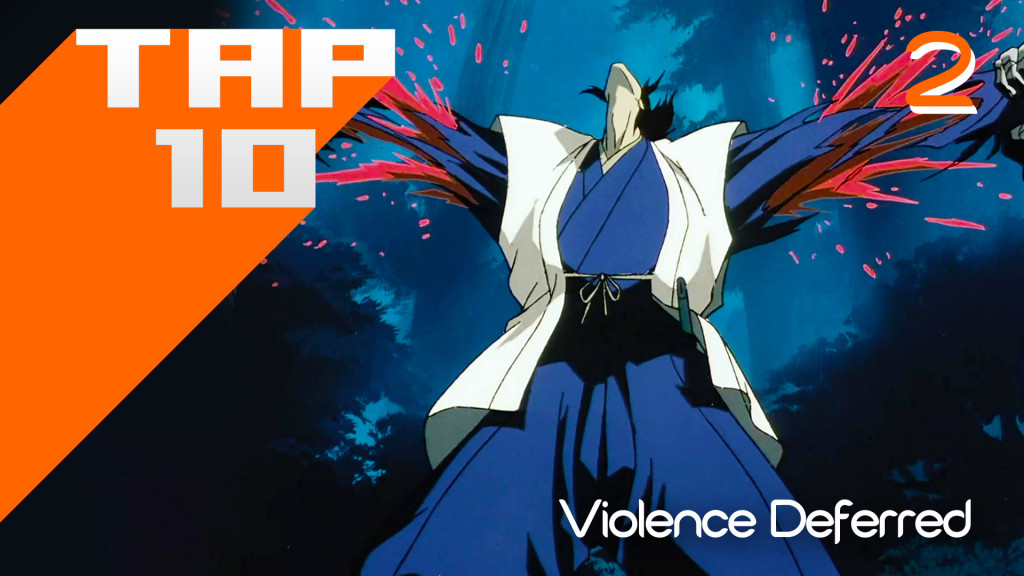 By far one of the most intense, so-anime tropes that when done right is one of the most visually gratifying things to see is an act of sheer brutality that happens so quickly, its effects are delayed. A sword exits a scabbard and briefly sings before being placed back in its sheath. The enemy laughs or something and then a look of pure puzzlement, his neck slowly slits opens with beads of blood collect like sap from a might tree then BOOM blood every where. Killed so skilfully he never saw his death coming until it was too late. Why Berserk still gives me the chills. 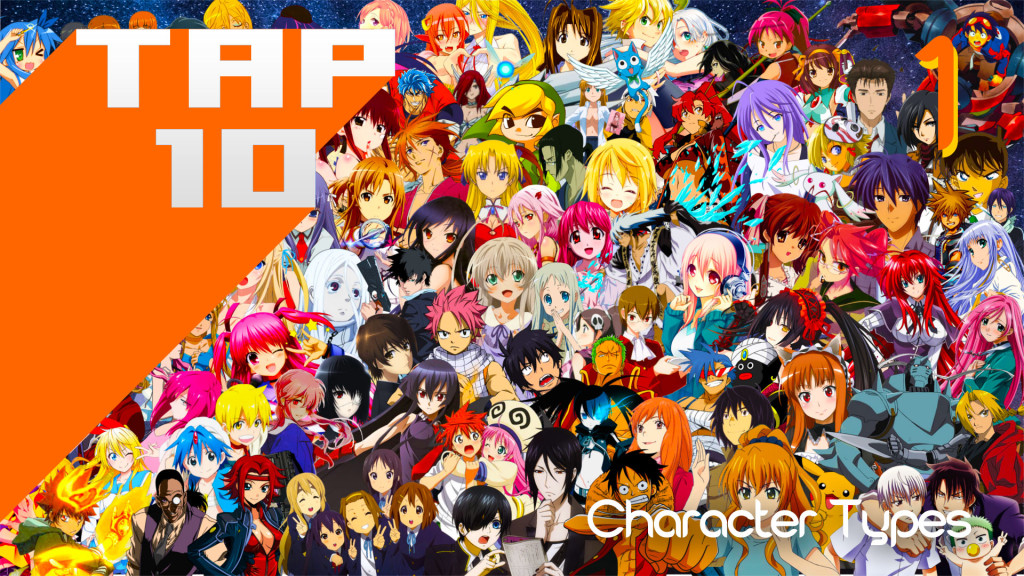 There are many unique character types in anime, and each individual characteristic has an influence on what they do and how they react to situations and others. In a nutshell:

Tsuntsun: Usually stuck up, know-it-all type character. They can develop a soft compassionate character, but most will only share this with someone special or in a time of weakness, otherwise in public they hide their sensitive side.

Kuudere: These guys usually have it together. Calm, stoic and reserved, they tend not to show any excessive emotional responses to situations.

Danderes: These socially-cautious butterflies tend to be careful of what they say around others, as to not offend others or get them or others in trouble or cause any undue embarrassment.

Yanderes: This is your crazy ex-lover types. Mentally sick. Obsessive. Possessive. Will do crazy shit to prove their love to you, which usually involves harming someone, including her quarry.

“So there you have it. Another #TAP10 wrapped. Any particular tropes you like that didn’t get mentioned in our list? Let’s hear it in the comment section guys or get at us on Twitter @TheActionPixel“