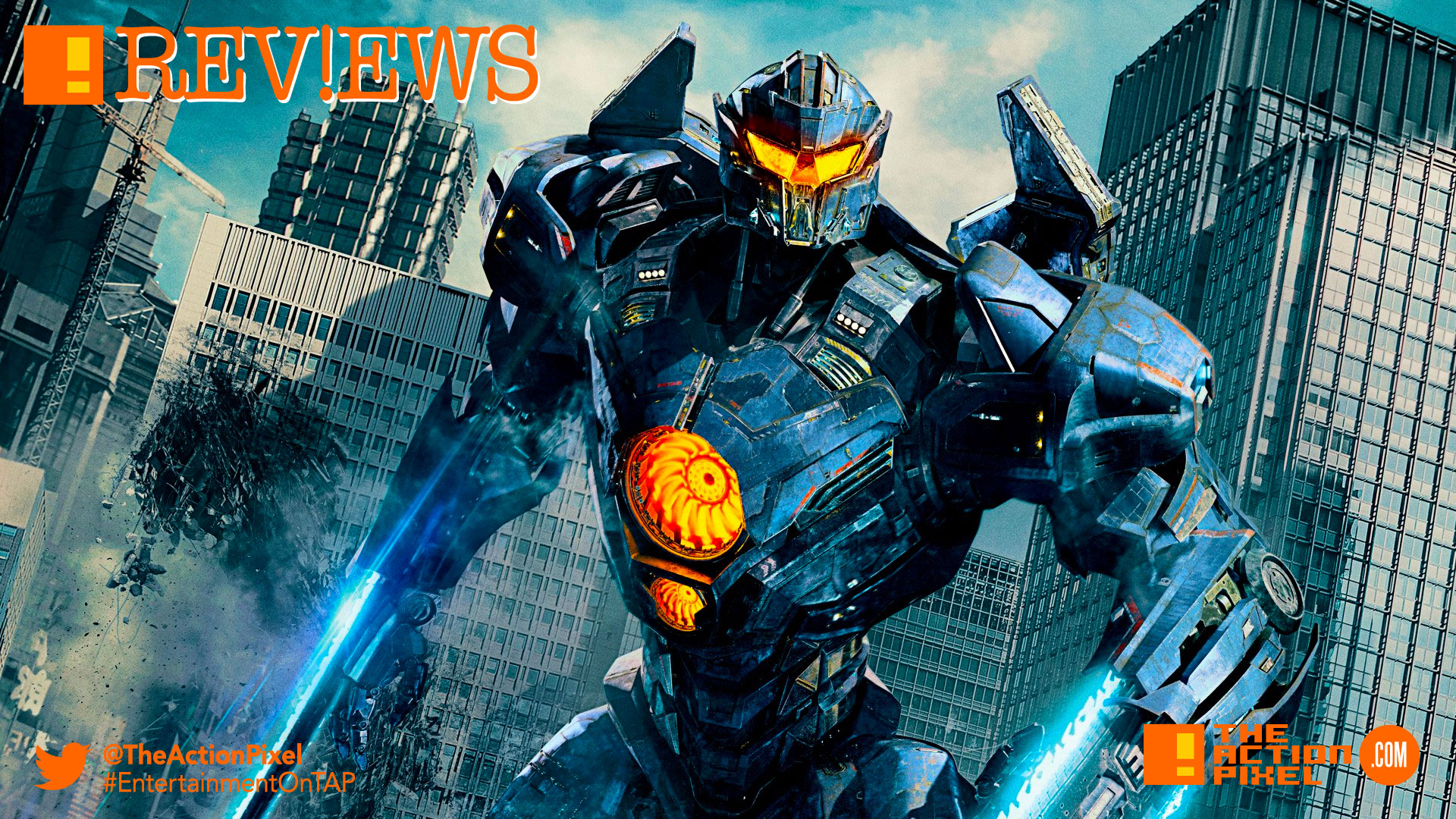 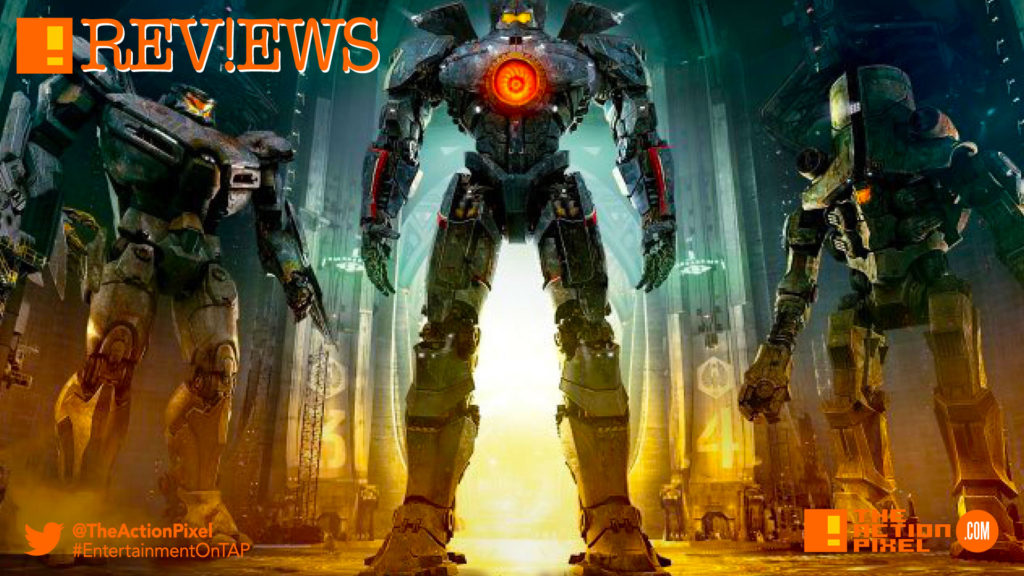 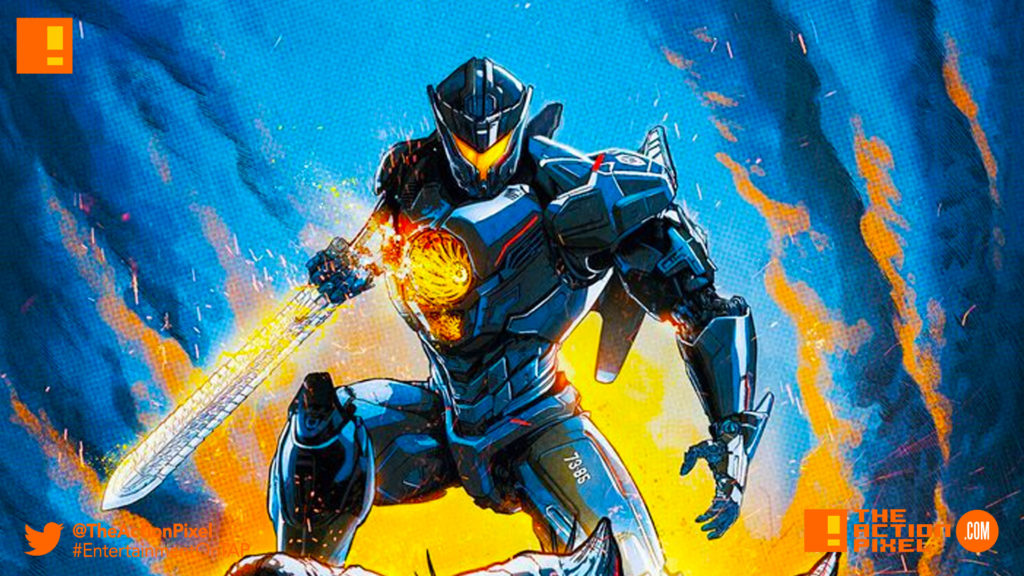 The Kaiju monsters that breached our world and caused Godzilla-scale chaos has been put to rest seemingly in the first film. And what is left in their wake is somewhat of a broken world, where people trade and steal to survive. Even the son of Stacker Pentecost -Jake Pentecost. 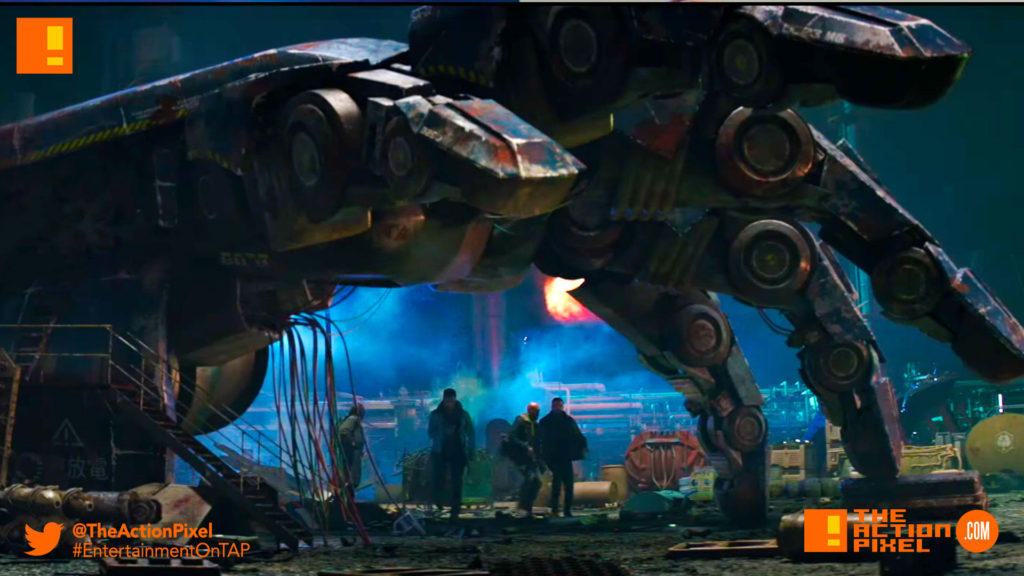 Stacker may have saved the known world from the Kaiju threat but his survived son has fallen some ways away from the militant jingoist apple tree, spending his time partying in derelict mansions razed amongst the remnants skeletons of dead Kaiju monsters and hustling his way with other vagabonds to make a living. It is however in his latest attempt theft of Jaeger tech from a restricted zone puts him on the run from dubious types and the military, which forces him to come across another scavenger – 15 y-o Amara. And Amara seems to be a bit of a tech genius having amassed spare parts and junk to create a Jaeger of her own. All of which is illegal. It wouldn’t be fun if it wasn’t.

Now with the Kaiju threat resurfacing, it is up to a new generation of pilots to bring down these new monsters before they destroy the world. 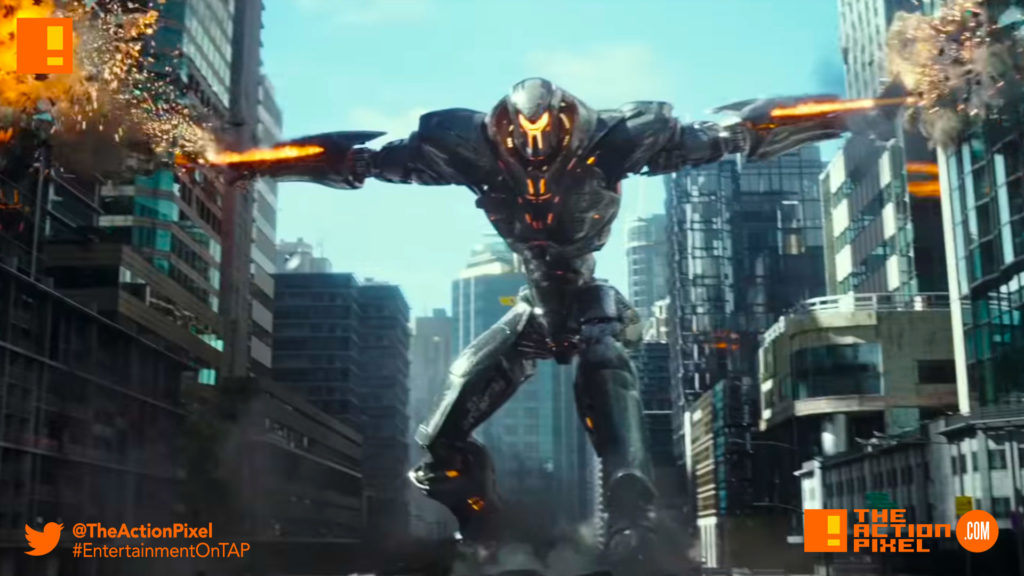 There’s something to be said about giving an ode to the best that has done it. And Pacific Rim Uprising has done this. Calling the monsters Kaiju to begin with, having the Godzilla-esque attack in Japan. Showing the life-size replica of the Gundam Wing model. So that in itself has been cool. There is something also to be said about the level of detail. And we’re not just talking about 3D and VFX. Yes, we are speaking about ‘neural handshake’. The process where the mind and thoughts are mergred and synced between two pilots in order to better pilot the Jaeger. It’s just a very intuitive name. Like if we just didn’t see the process, but heard the term, it would make sense. It sounds obsessive on my part, I know. But it is things like that that goes a long way sometimes.

No is it believable that these huge pieces tech could undergo fixings and (untested) modifications in what seems like a matter of hours after a huge Kaiju /auto-piloted Jaeger attack on the main HQ? No. of course not. Nothing was provided to give that much-needed level of suspension of disbelief. Or how a little girl Amara, by herself, accumulate all that gear to make a functional Jaeger. That’s not questioning her ability obviously, but rather the logistics of moving all that tech without being discovered. But I think this is just me reading too much into what essentially is your popcorn film experience. Not as painful as transformers, but also nothing that will transform your life or cinematic experience.

No if any of us was paying attention to the nuances of the first film (sure you were), Dr. Newton Geiszler had a ‘handshake’ session with the Kaiju brain which unveiled the little kritters from the other dimension and their intention of terraforming and destroying our world using Kaiju as a test of our Earthly defences. Well, it seems that neural handshake left Geiszler more fucked up than anticipated, as the Kaiju has essentially taken control of him and has used his skill to infiltrate the auto-pilot Jaeger program by merging the tech with Kaiju brain material. The autopilot Jaegers then get the Kaiju awakened in them upon launch and the immediately make their way to the Pacific Rim to open another rift in the dimension for the Kaiju to enter. Why this can’t be done on the side of the Precursors – the beings that genetically engineers the Kaiju monsters – I don’t know. But who cares. What follows is a flurry of building destruction and annihilation. 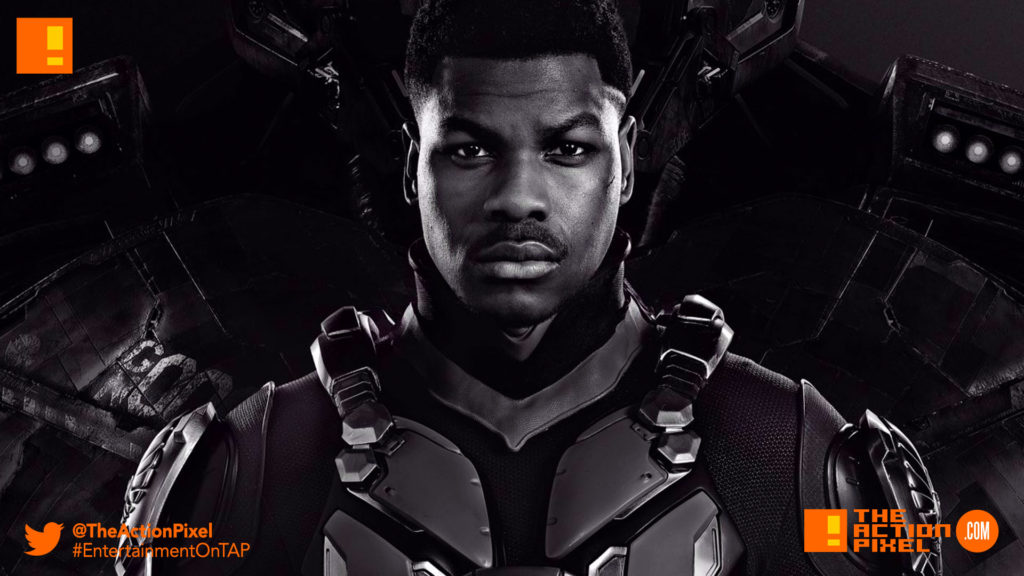 The son of Pentecost – Jack Pentecost is a joker. Nonchalant in his attitude. Everyone reminding him of his great potential but his anti-authoritarian stance somehow makes him a great leader. Yeah, that trope. It doesn’t get too emotional deeper than the average popcorn film so it’s light-watching. John Boyega does bring his charm to the film, but not much else. 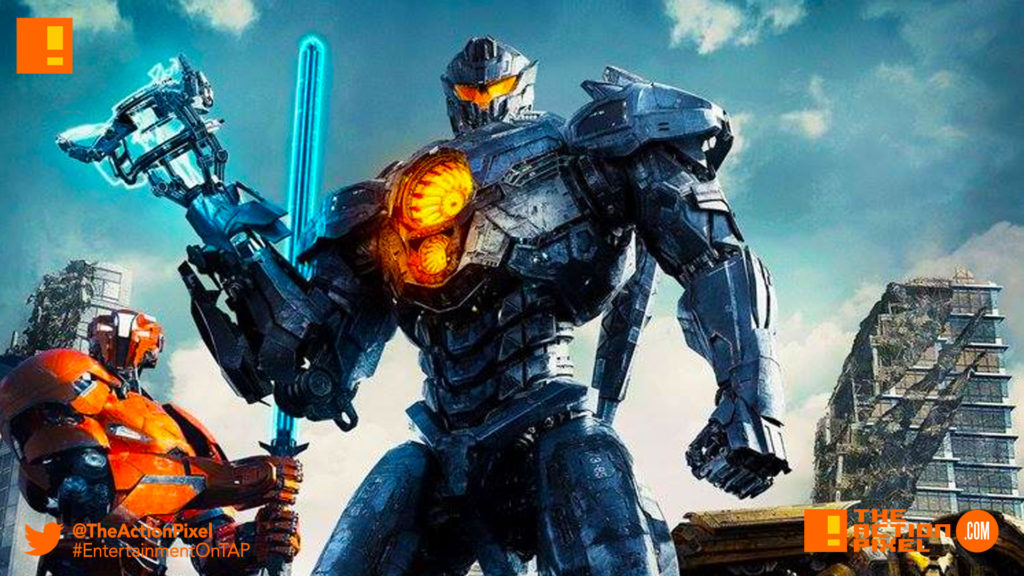 Now as for a sequel, it is apparent that the setup will have the Jaeger pilots bringing the fight to the other dimension – the Kaiju and the Precursors. This doesn’t send me into great elation and anticipation for a follow-up. Don’t get me wrong, if you hit higher than transformers in the narrative department, kudos. But if your expecting a truly action-packed with equal-sized nuanced narrative and character paradigm, then we’d suggest looking elsewhere. 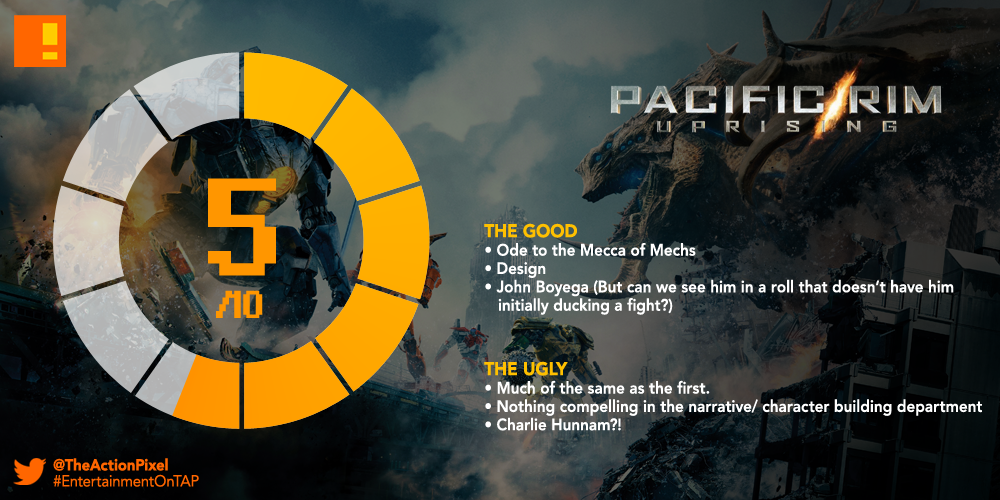 John Cena. Duke Nukem. The Movie. This is a thing.