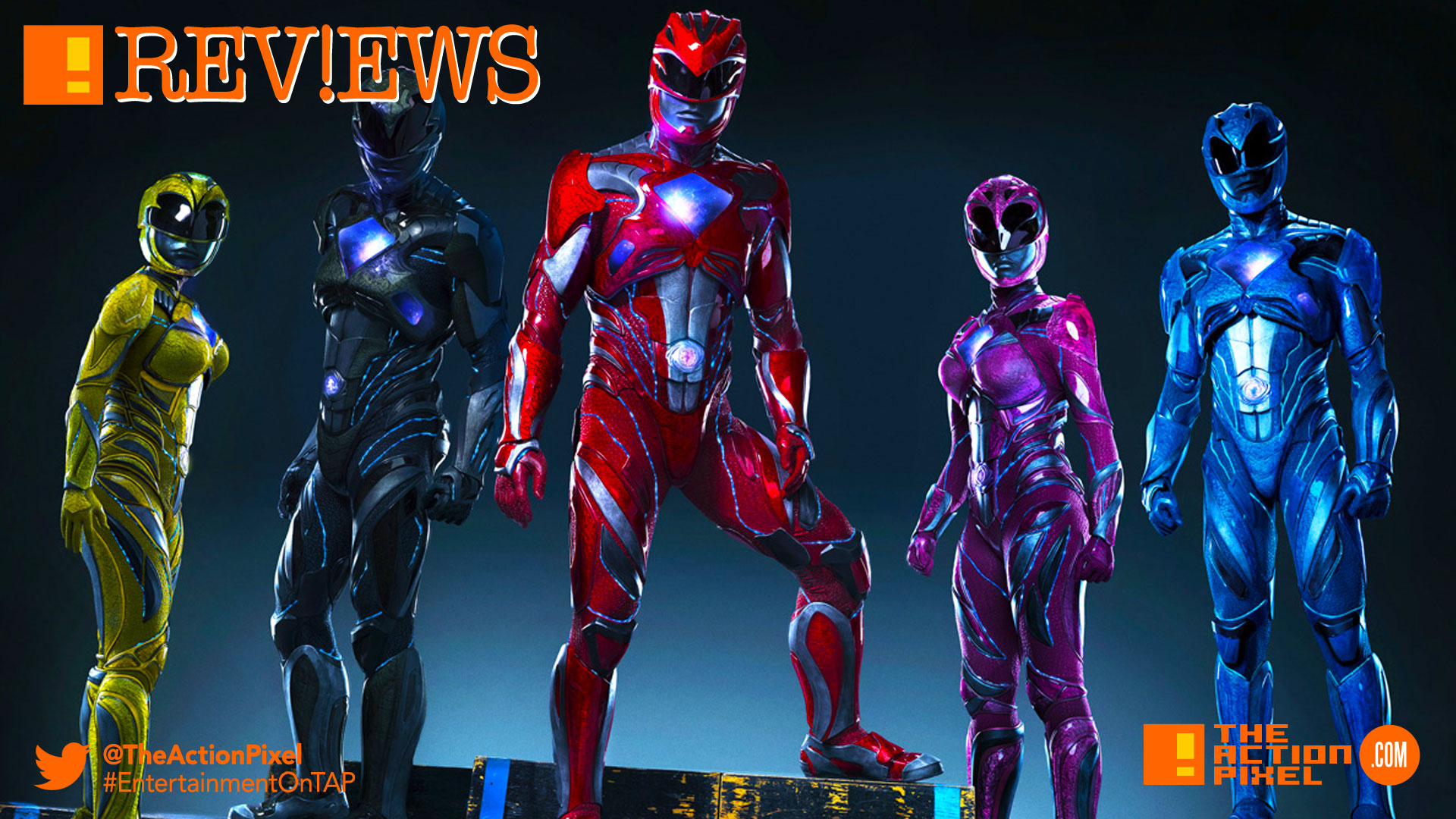 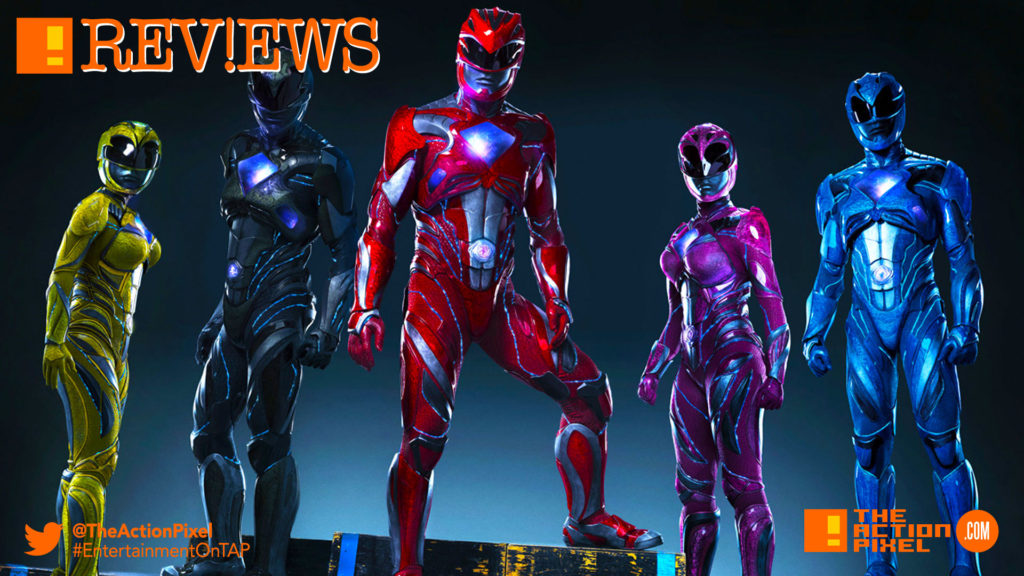 I’m over thirty. So we’re talking preteen when I first partook in Power Rangers and mimicked the martial arts which at the time I most likely thought that flying through the air was not trampoline assisted and striking someone across the chest would produce literal sparks. But we come from a time where the Red Ranger was boss, the Ranger colours were racially and sexually-themed (gee-whiz) and the Green Ranger was a loner asshole that when he showed up – usually late – you’d never know if he was coming to kick monster-ass or Ranger-ass. Needless to say I connected with the Green Ranger the most.

So, after seeing the last Ranger movie in the cinema back in the 90’s, I thought myself to have grown out of it. But low and behold, Lionsgate and Saban Brands started churning out trailers and posters for their coming Power Rangers film, and we found ourselves being drawn back in. Hell, maybe even intrigued.

Though we would expect any use of the phrase “it’s Morphin’ time” would induce a gag reflex of cornball-tasm, we swallowed our fears and journeyed into the latest offering of the colour-co-ordinated galactic defenders to see what all the ruckus is about.

The time to acquire a transformation of some sort… 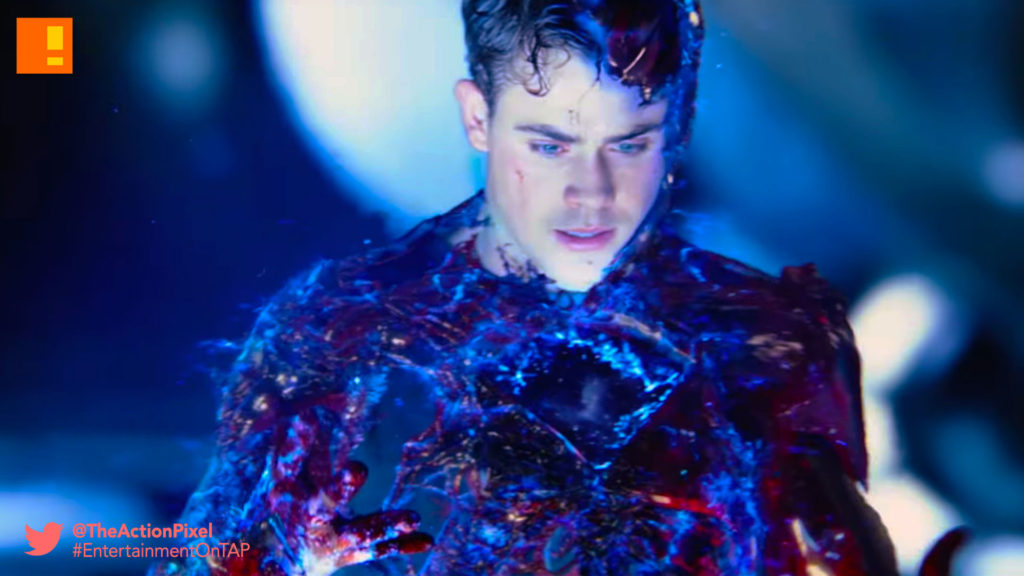 The opening sequence gave us a pondering. Not so much so us learning that the Rangers existed in the age of dinsosaurs whilst Earth being host to an off-planet alien war. Nor finding out Rita is actually one of the first Green Rangers. Or that Cranston’s tangible Zordon was a blue alien and the first Red Ranger. But what got us was that the milieu felt like the Power Rangers fan film that Saban so desperately tried to shut down. But already we can see where Saban is setting up various narrative inspiration from for the next slew of Power Ranger spin-offs and sequels (6 more with Lionsgate).

In one last dire attempt to save the coins that power the suits of his fallen comrades and keep it out of the hands of the rogue Green ranger, Zordon seals the coins with some magic we’re assuming in a crystallised formation. Oh, and allows an impending comet to strike the earth. Zordon straight killed the dinosaurs to get rid of the Green Ranger, who we swear was also Zordon’s then-girlfriend. Cold shit, bro. Or maybe that’s where my head naturally goes. Betrayal and being forsakened by those closest to you. I need help.

The impact destroys Zordon and sends Rita hurtling deep into the murky depths. Fast forward to normal times, and we see the lives of the teens with amplified attitudes that the world will depend on to save them. And judging by their many millennial-esque issues, hope is dire indeed.

Teens with too much attitude 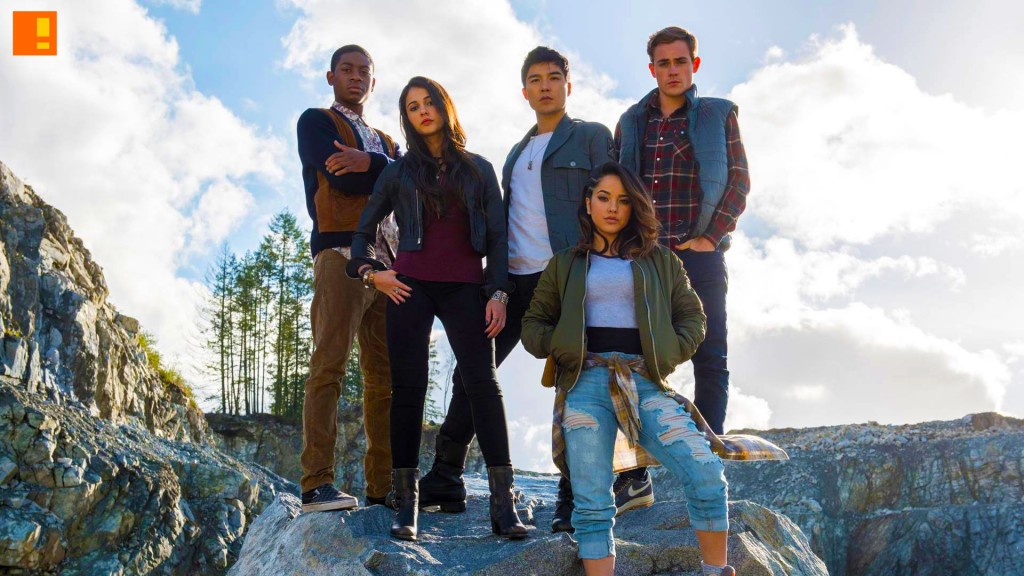 This current rag-tag team of teen misfits has never been edgier. The stats – a star jock whose practical joke ends up with him totalling his pick-up and getting a police monitor strapped to his leg. A popular chick-turned-pariah who text out a nude picture of her friend which ending up going viral. A gifted-but-challenged kid who has the penchant for making explosives (which accidentally went off in his locker at school). A closet lesbian working through her feelings and as always parents just don’t understand. And another kid whose mom is terminally-ill and he is burdened with looking after her. Now all their problems are different and should not be judged as if to say who deserves the world’s smallest violin , but they all have the problem of being outcasts. No standing in the upper echelon of the famed high-school social hierarchy. And the majority of them serve out their pregatory serving detention with the rest of the juvenile delinquent losers of Angel Grove. This is where most of our team meets. 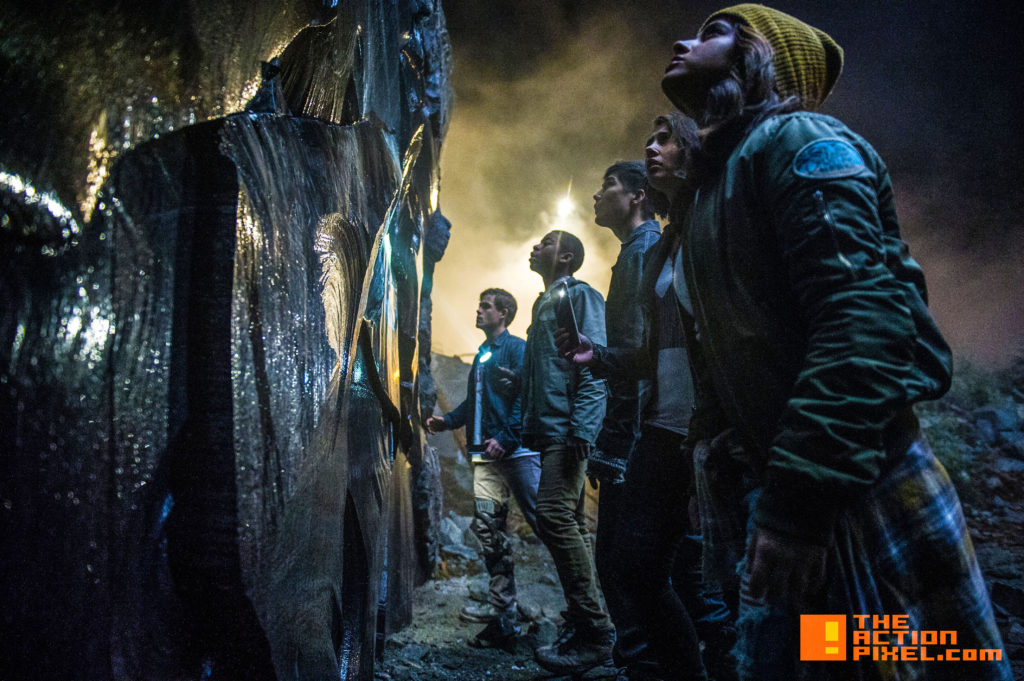 But ultimately all their paths cross in the Quarry which is the site where alien Zordon placed the coins for safe-keeping, which with the help of IED Billy becomes unearthed. Each take a coin and in escaping from security get hit by an oncoming train but recollect nothing that happens from then to waking up in their respective beds seemingly unharmed. By most certainly changed. The teens are stronger than ever and faster. Just what we need with the added teen angst and hormones. The team then return to the site of where they discovered the coins and find in mind-boggling cavity below an underground well is an alien spaceship and in it is Alpha, the robot and Zordon. Honestly we also had the knee jerk reaction when it came to Alpha’s redesign. But seeing him talk and move, it’s not bad at all. And Zordon manifesting in a wall of tile like metal pins is also good. Who doesn’t want to see Cranston discipline some uncouth, unruly youth?

It is about this time the remnants of Rita Repulsa gets drag-netted from the bottom of the seabed and rejuvenates into a gold-digger, “my precious” monster-summoning succubus of pure Y-7 rated villainy. And she’s after some crystal that supports all life on earth… which happens to be located at Angel Grove. Middle of nowhere America. Gotchya. So Zordon has little faith in these young tykes to get through with Ranger training in half the time to challenge Rita and protect earth. But something tells us they’re going to learn a little bit about teamwork and the value of camaraderie before the battle is out. 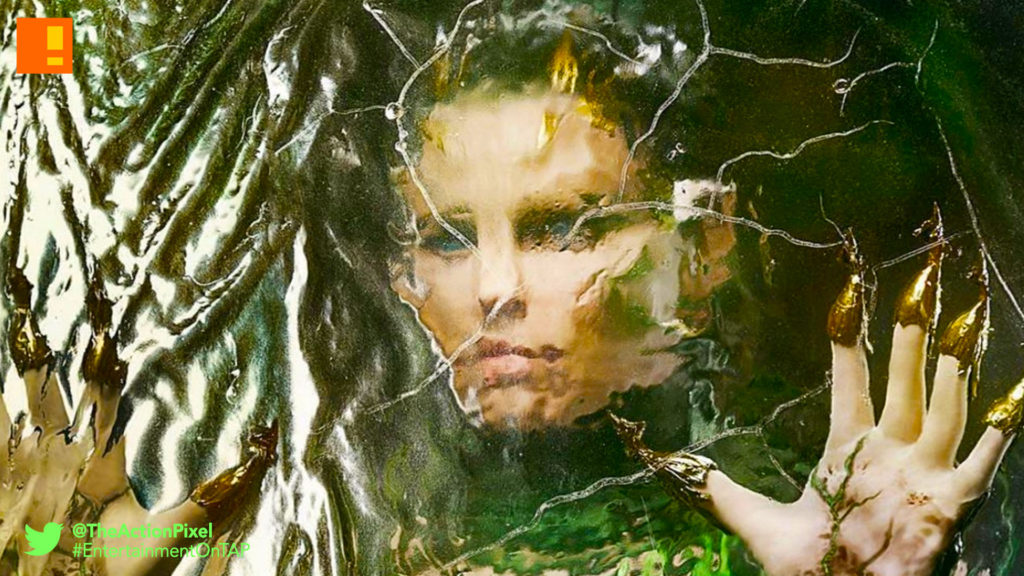 When I speculated that Rita was actually the former green Ranger that was a game changer for me. Of course the Green Ranger back in the day was a loner (swear he was under either Zed or Rita’s control at one point), but essentially has always been seen as a wild card.

But Rita as Green Ranger proposed a unique twist definitely worth exploration. The obvious betrayal would have to be addressed, but also the reasons for such a turn. Power? Even more interestingly, a decision formed out of some misguided attempt of doing the right thing? 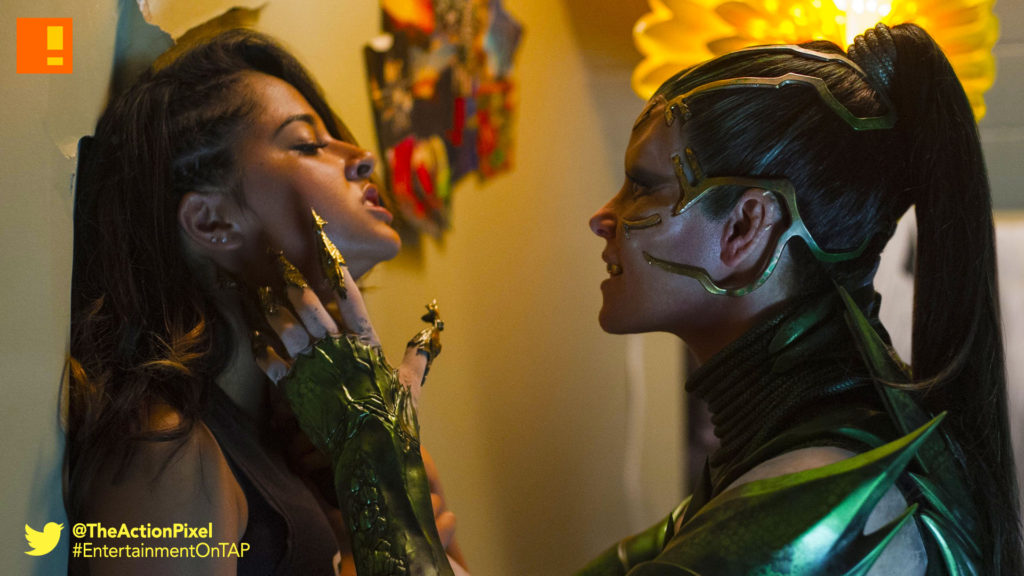 But alas we got a villain who was pretty much like the girlfriend who only wants you for gold. Like Annunaki or the stock market. We do however get a glimpse of the tragic hero in her near the end, when Rita claims “others will come” and questions the strength of the Rangers bond to withstand such a meeting with invaders. Other than that, and the intimidation game she plays with Becky G’s Trini, Rita feels too much like your run-of-the-mill baddie. 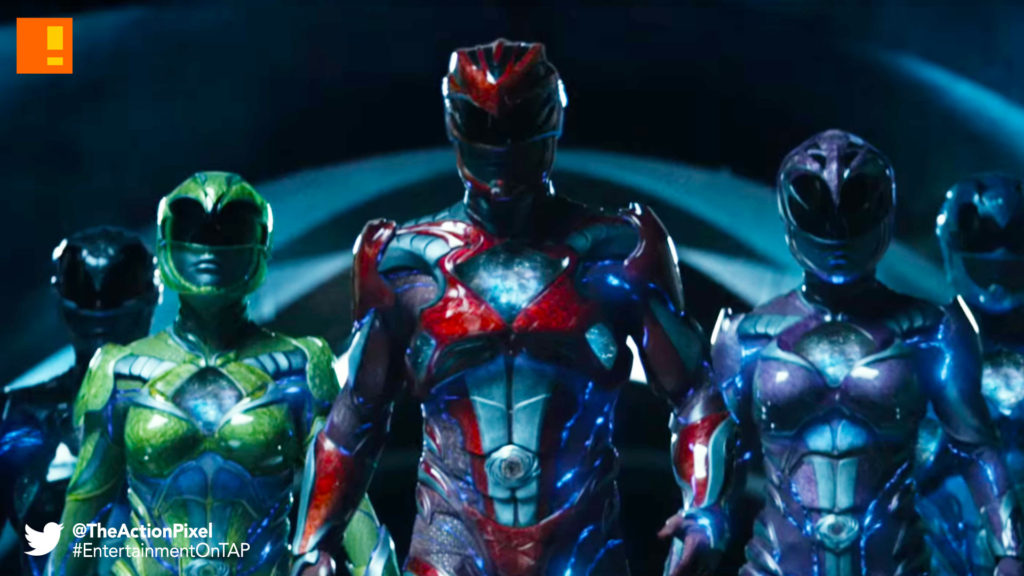 The film, as it amplified the oh-so-dire issues of millennials, actually presented a unique take on Power Rangers. Where teens are often seen a vast potential cast in unwieldily, volatile vessels, the idea of belonging to something bigger than themselves – Like the Power Rangers – would prove to be an awesome opportunity to be valuable and be valued. So long as they answered the call.

But in the time it takes Jason to muster the words “it’s morphin’ time” something happened to the story. He broke it. I think he literally broke it. Then there were the Zords and the Power Rangers’ theme song was there. My soda went flat. There were literal sparks in the cinema from equipment. The left side of my body went numb. It was like that time I dabbled in the stock market and chose to buy right before a steep bear. Hurt me in so many ways. The fight choreography was ample but not spectacular. What you’d come to expect I guess. The suit redesign however was perfect especially when you play into the alien technology side of things.

But nevertheless, things got corny, slightly-rushed and “Satudray-morning routine” very quickly after Jason muttered those three fateful words. Hell, I’d appreciate it more if the added a bit more of a dramatic flair with a fast track camera in to Jason’s face as he said it. 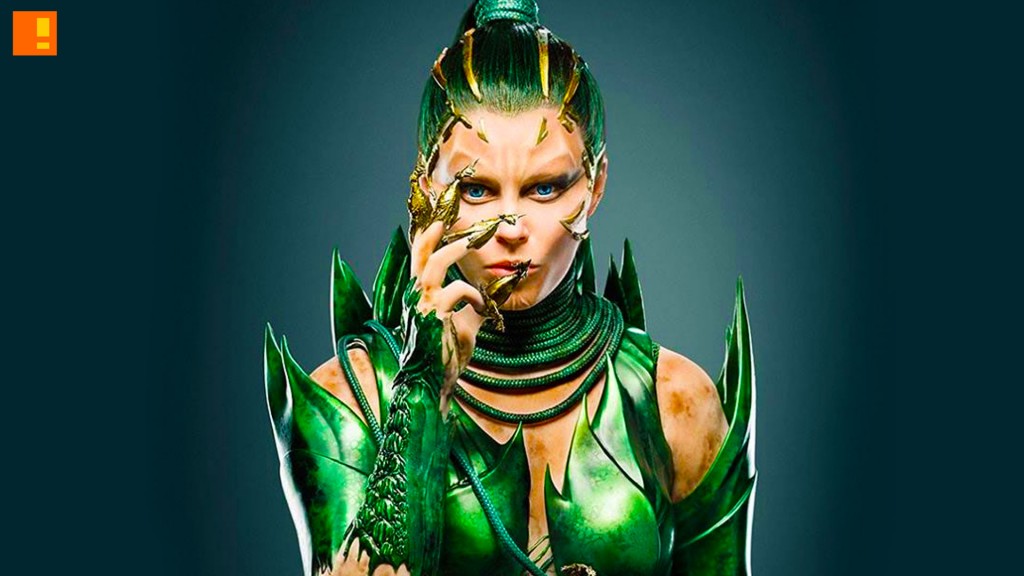 The film was coming to an end quickly. More than half the film was spent with them trying to morph into their protective suits and having major trouble fighting Rock-monster hologram enemies. But somehow they were able to pilot the Zords and form the Mega-Zord with relative ease under pressure. Must be automatic.

Now the Rangers have Rita where the want her. Goldar is fallen all to shit and they need to resolve this threat. So the Mega-Zord backhand bitch-slaps Rita into outer space. Literally. What? Yeah, sure the Rangers were delighted in this age-old pimp tactic but I sure as hell wasn’t. I’d rather have commentary automatically kick at this point along the lines of “We weren’t sure how we were going to end this battle, we couldn’t have her escape without suffering injury, or carry her to a little jail on Zordon’s ship, so we thought… yeah, let’s bitchslap her into orbit.” And to make matters worse they showed her actually floating and ice crystalising over her face. Jesus. 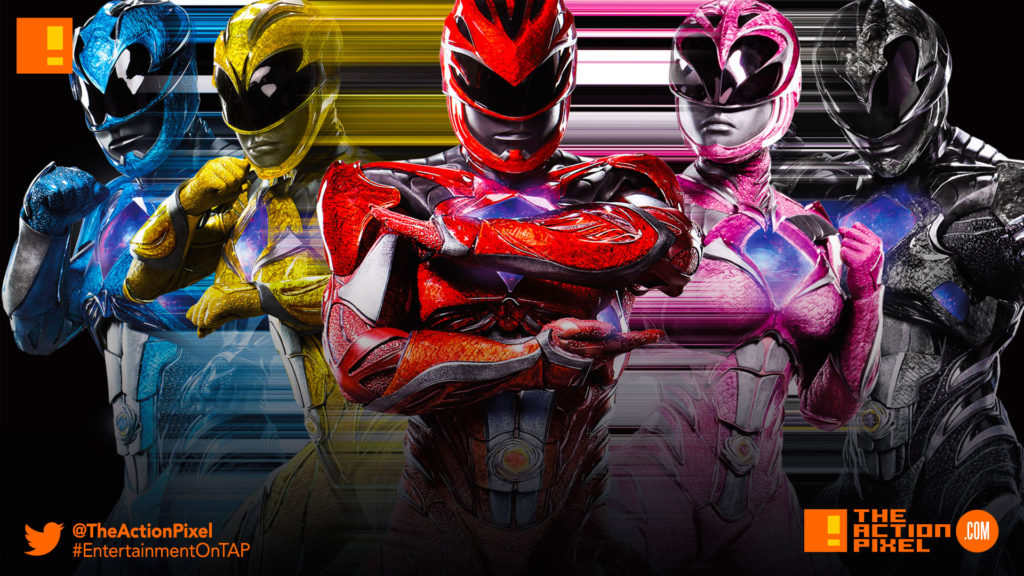 So, the verdict. An interesting enough take on the Power Ranger franchise, and definitely a lot of points to explore in branch-off narratives. But I fear cornball-esque moments is going to surface and in this instance, there was a sharp rise nearing the end. I felt the build up from snot nosed teenagers to galactic martial art warriors was based more on them morphing than actually learning skilled fighting or even more-so working conducive as a team. And that takes more than a tell-all campfire support group.

Or does the coin endow them with both strength and a natural proclivity to know various systems of self-defence? Who knows. But I think any further exploration of the Power Rangers will have to make a serious decision between mature entertainment or syrup-y kid-tastic fun.

Zord mechanics, particularly the full Mega-Zord transformation was not as exciting as a Transformers / Voltron cutaways. Although in the heat of battle we guess any lingering would be unrealistic.

But, hey can’t fault it considering Saban kept my attention for more than half the film. It’s a nice pulp-y watch with some emotive moments. From the short death of Billy to the premonition fed to the teens minds of each Ranger standing amidst statues of human-husks of ash in Rita’s Pompeii-like future earth. Although any follow-up would probably best be a prequel… I certainly want to know the reason behind Green Ranger’s dissent. 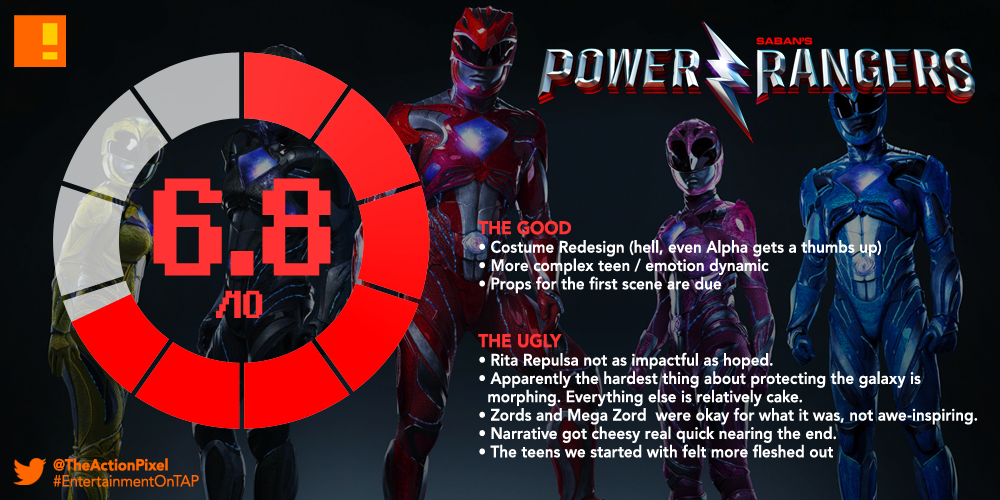 “Oh shit, can we talk about Black Rangers’ facial expression when joyriding his Zord? Fuck’s up with that? Like he was directed to ‘be intense, but make a face to like you’re teasing your big brother’. And who else wants to see Bill Cranston as an actual ranger in a prequel. No jokes about a ‘White’ Ranger… or ‘Blue’ or any other Breaking Bad reference. Don’t agree with anything we goddamn said? Well, bring it bro. Tell us in the comment section + via Twitter @TheActionPixel“