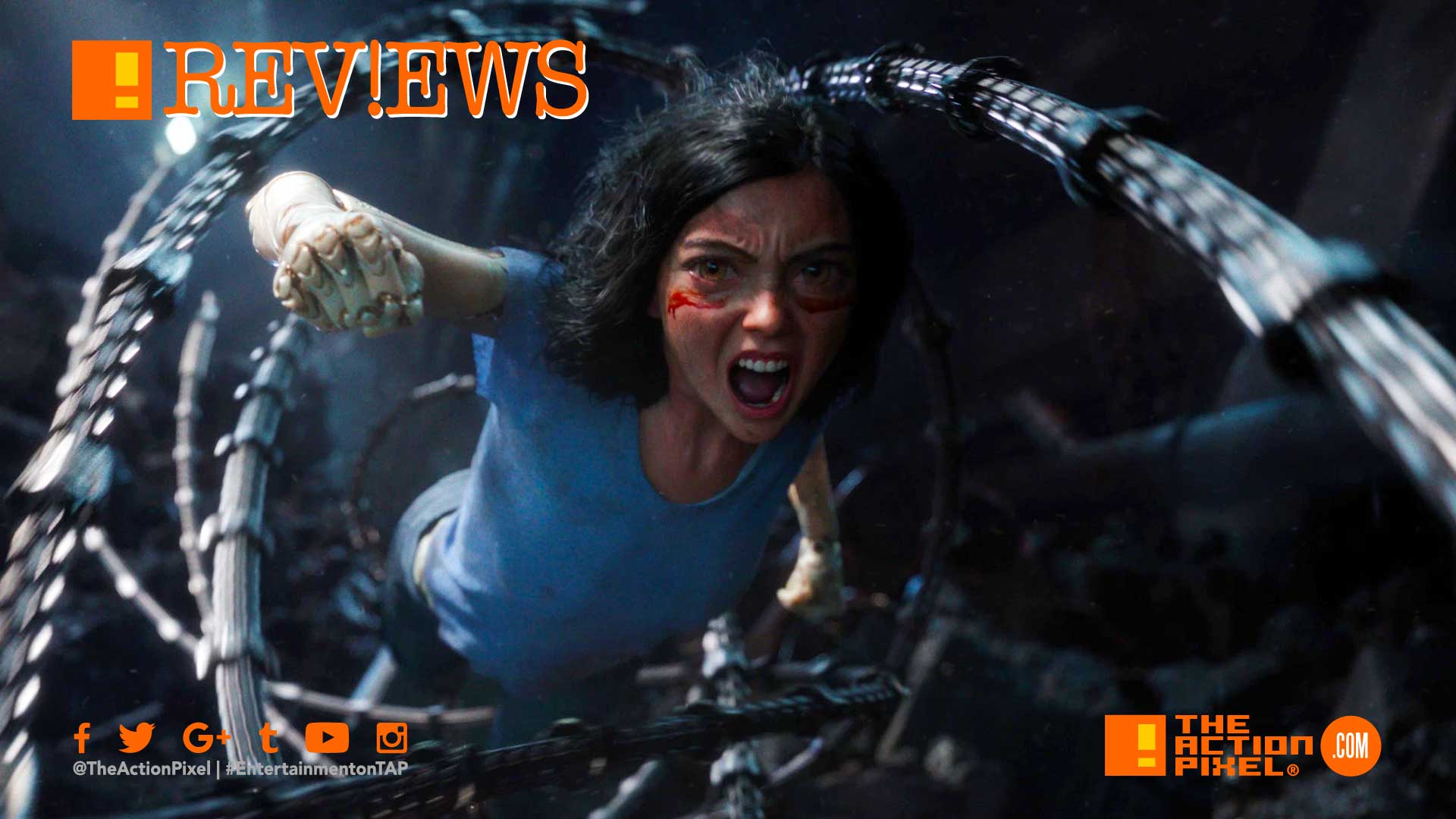 It has been a minute since we heard that Battle Angel Alita was set to get a manga film treatment. And of course, given the likes of Ghost In The Shell, we were not exactly twitching for another remake, per . Nevertheless, we had our eyes transfixed on the coming Robert Rodriguez-directed and James Cameron-produced Alita: Battle Angel.

Does she soar or is she forever stuck in the landfill of broken hopes and dreams. Let us see.

For Dyson Ido (probably invented the vacuum), and the rest of the lowly dwellers on earth who are not privileged enough to be citizens of the floating city, every day is trash day. And out of the landfills of mechanised refuge, Ido happens on a surprise find that could very well change the course of his life and the future of Iron City. The bust of an android. But with a functional, human brain.

Ido christens her with the name Alita, after his deceased disabled daughter. And she is brought back to life, with no memory of her past, or her purpose. But she does love chocolate. That’s as good as any a start.

It is however in the heat of battle does lucid memories return to her, entrenched in battle on the moon. Storming the celestial cities that floated mockingly over the dregs of the land-dwelling populace. And even as Alita discovers her innate ability to fight in an ancient android-based martial called Panzer Kunst, she finds that her war is still alive and well. And all her angel’s rage is aimed at the last of the floating kingdoms of the heavens. How she gets there may be through a bit of bloodsport – whether it be hunting dangerous cyber mechanical criminals or playing for blood and bolts in a winner-takes-all game of Motorball. Which is way more dangerous and kinetic than it sounds.

Alita soon finds herself on a road of self-discovery, one that is tumultuous in every sense. And whatever the outcome, one, mantra steady beats out of her mechanical heart…

“I do not stand by in the presence of evil.”

Maybe it’s an android thing, but Alita’s ‘flashbacks’ are rarely flashes. Damn near whole sequences. The first one comes in her scrap with some unsavoury types who ambushed Dr. Ido during his nightshift as a bounty hunter. Gotta make those papes.

Alita was tracking the good doctor when he went out at night because she, like all good women, swan-dived into the conclusion that Ido was a serial killer of women that was on the loose. It was, in fact, Ido who was nightlight as a bounty hunter looking for said killers. And these mechanised abominations worked for the man in the land – Vector – who runs the Motorball circuit.

Alita, armed with a body never meant for combat, makes easy work of the goons even as her reactions to their attacks were more reflexive than deliberate. Alita, in the time and space it takes to execute a descending kick that could disarm (literally) the colossus-sized machination Grewishka, has a vivid flashback of a battle on the surface of the moon. Arm-to-arm with comrades, playing some serious laser tag. And Alita finds out her name was 99. I know, needed to speed the narrative along. But still. It, however, was a lovely sequence. All space battles are. Especially when they involve Martians, which she is, as a sentient weapon for the United Republic of Mars, or URM.

Panzer Kunst. Can we say this is a brawny, bad-ass name for a branch of made-up martial arts? And by the looks of Alita is pretty damn good. The fight sequences were well orchestrated and nuanced, particularly two between Alita and upgraded Grewishka. And even when Grewiska’s claws ripped Alita down to her torso, her defiance and law of survival never ousted. To do a one-handstand, get enough air and break off your hand in eye? Goddamn unbelievable. Not for Alita, though. But having her say “fuck your mercy” was about as close to foreplay as one could get with your clothes on in a dim lit room.

The animation was good and I felt the design kept true to the original manga, though some of the heads of the mechanisation felt too VFX-y, if that makes any sense. Or, better put, the juxtaposition felt more rigid and unblended at points where faces were transfixed to machines.

I follow the guy that did the storyboards for the Motorball sequence on Instagram. Pretty awesome. And this sport absolutely lived up to the manga in both pace and aesthetic. Why anyone would play this game is beyond us, but definitely worth the watch.

Aside from bountyhunting, Motorball seems to be the only way people can make any pecuniary advancement. Even Dr. Ido took part in this, until a drug-addled contestant he mechanically modified ended up killing his disabled daughter. So Ido ended up serving the community to pay his pennance. And his wife… well, she started chasing the prestige money and wealth promised by Motorball. Which meant working for Vector.

‘That one black guy in that part in that movie’

As a guy that enjoys film, hell, even making them when I have the time and money and patience, their are certain things I hate. Non-nuanced social commentary. Like telling a black guy to get over a 300-year old feud between the Mars people and the Earth people. Hm, sounds vaguely familiar. It could be worse, we guess. Clint Eastwood could have directed.

And not it’s been 300 years and the oppressive structures that govern the Scrapyard after the great war still exist. It’s not ancient history if it is still current. Rant over.

The Sex Doll Invasion is Coming

This is a bit off a dark fantasy of how I think the world is going to end. Alexa. Ever more real sex dolls. Throw in some Skynet and GITS and that will be the end of mankind.

Okay, fears aside, the emotive range for Alita was surprisingly great. Her angst, pain and fortitude radiated in certain scenes. Which made her search for innate power such a fulfilling watch. And seeing her take her literal beating heart Aztec-style to make a boys wish of a richer life come true… is hella naive. Yeah, Alita, that was pretty intense. And you saw how dude started briefly salivating at the thought of selling your parts for a chance to go hobnobbing with some anti-gravity socialites. Girls hella naive. Even android ones. And from experience girls that go off kilter in the love department can go all the way left when it comes to hate. And trust me, guys are pretty easy to hate because we do dumb shit.

But to bring it all back to the sex dolls, it’s hard not to make these comparisons when you think about sci-fi film characters like Blade Runner 2049’s Joi. She likens her self to trash and being an “insignificant little girl”, she enters instant puberty when she discovers a new body in a long-sunken Martian warship. Hella flexibility. We’re sure PornHub has like a whole category dedicated to this. Like… sub Droid? Of course, we sense there is a feminist argument somewhere there needling towards the idea that women are built for one thing. Even if that one thing is to do battle with the face of an angel.

This is the Achilles’ heel of the blockbuster today. There is that intrinsic need to add on trilogies and universes that will see spin-offs and nexuses that will map and fan out to put a constant drain on our pockets.

Done well, a film should be able to stand as a solitary masterpiece and as a golden thread woven in the tapestry of an engrossing series. Alita: Battle Angel… is none of these. This film felt more like an introduction to Alita and her self-discovery, mixed with a bit of sports movie magic. All of which pointed to a sequel coming. Planned or hoped for.

Alita’s story had no real twists to make it captivating. I guess finding out Ido was from the floating city and his banishment came from not wanting to abandon his disabled daughter. Other than that? Nah. And the fact she’s playing the Motorball game in order to win a trip to the floating city as top dog to enact some long-awaited justice seems a bit conformist for a bad-ass like her. Nevertheless, I personally do not feel her first outing stands strong as a singular film. It may play the role of an aesthetic building block within an entire trilogy. However, it misses out on being an impactful manga movie. Which proves that transcribing a manga does not ensure the film will be flawless. Even if you get the aesthetic and characters down to the ‘T’.

Alita: Battle Angel felt quite respectful to the manga. And Robert Rodriguez and James Cameron get some brownie points for that. It, however, falls short of a cohesive experience. The aesthetic was there, but the narrative did not hold much stock. Especially considering how extensive the Battle Angel Alita story is. The need to milk as prospective instalments for a series may have been at a cost.