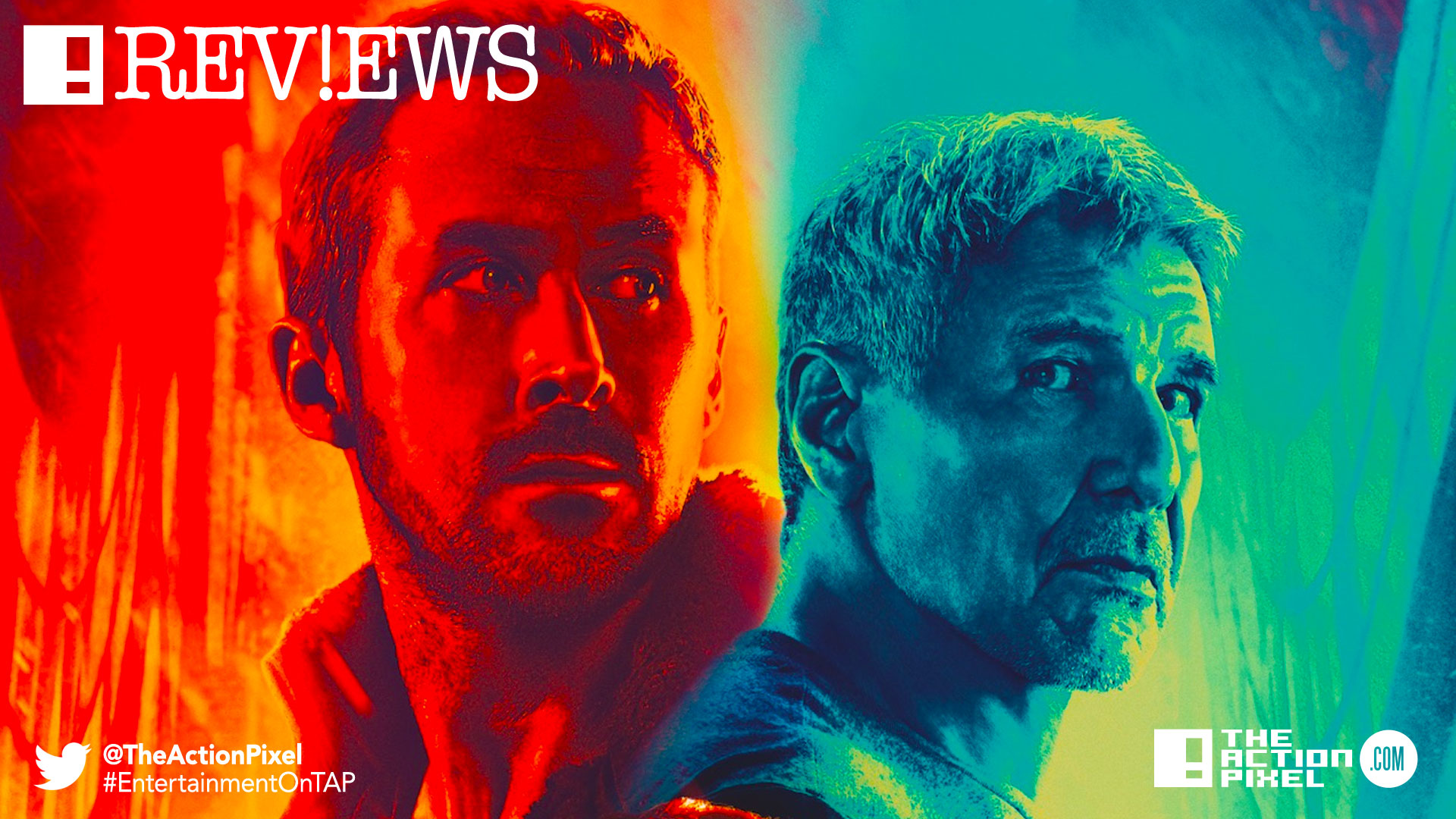 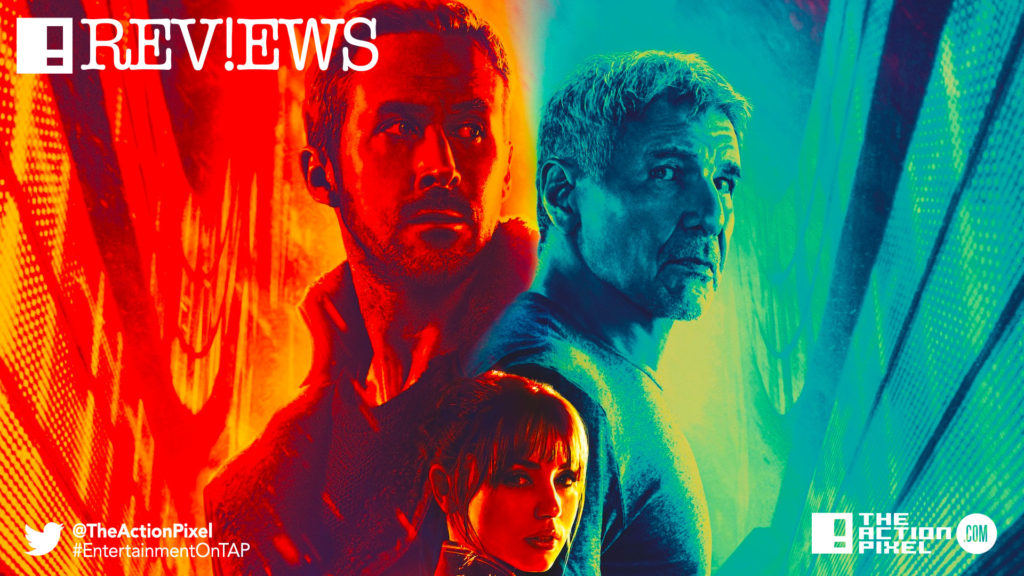 It has been 35 years in the making. Or at least that is the buzz line being used in promoting the sequel to the 80’s classic Blade Runner. Now we have Blade Runner 2049 scouring the globe with enough vast dystopian cityscapes where every corner there is a red light district and enough hum of machinery only drowned out by an electronic brassy soundtrack you’d imagine an old EDM DJ would make if he fell asleep on his MPC.

So how does this new installation to the franchise add up? Let’s take the dive. 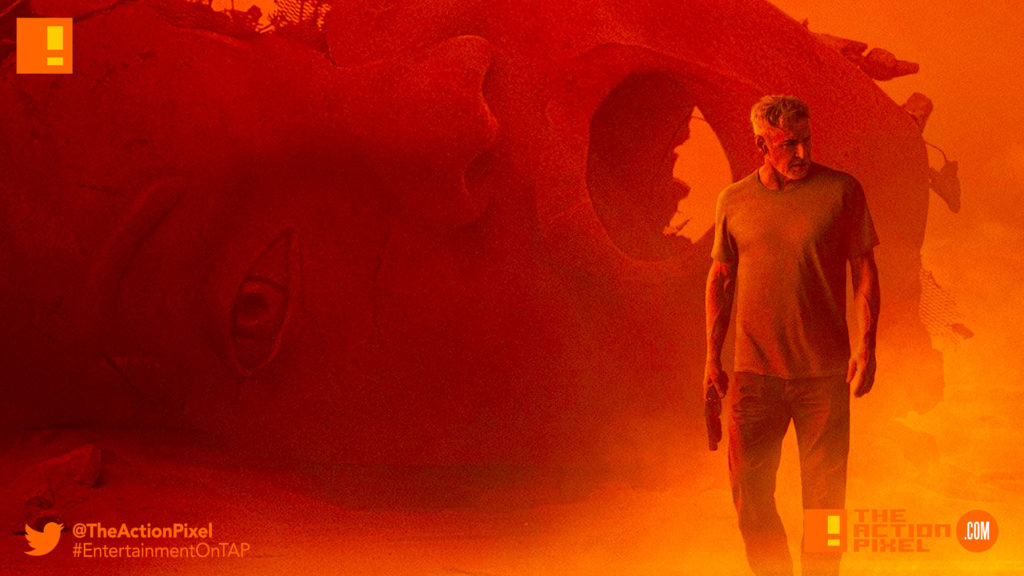 Give or take. The world we open up to is vast, sprawling man-made structures that hint at a world with dwindled natural resources. Everything America is denying now – bad weather, climate change and unsustainable food sources – has come to bite the world in the proverbial ass. Replicant Joe, well, Officer K (Ryan Gosling) does what any good house-slave skin job does, obey its masters and hunts and puts ‘defective’ replicants out of commission. But taking out Dave Bautista is a harder task than most.

But it this job that presents some findings that challenges the core beliefs of Officer K, as the remains of a Replicant, as well as a date inscription on a dead tree, proposes a earth shattering premise that could make, or undo the current society. The found remain of the Replicant showed signs of childbirth. Something though impossible. Jared Leto’s character Niander Wallace wants to create a replicant workforce at a higher frequency than they are being produced at now. And we guess a reproductive farm for them would ultimately help towards that. Sad to say this by no means is an original idea.

But the LAPD Lieutenant Joshi (Robin Frickin’ Wright) doesn’t like the idea of this earth-shattering premise, and wants everything linking to the case destroyed. Which leaves us with Officer K, who’s flashback at seeing a date inscription at the root of a tree soon leads him to believe he is the child of this replicant birthing. But is it true or a planted memory? And how does Deckard fit into all of this? Well, half the joy is finding out, surely 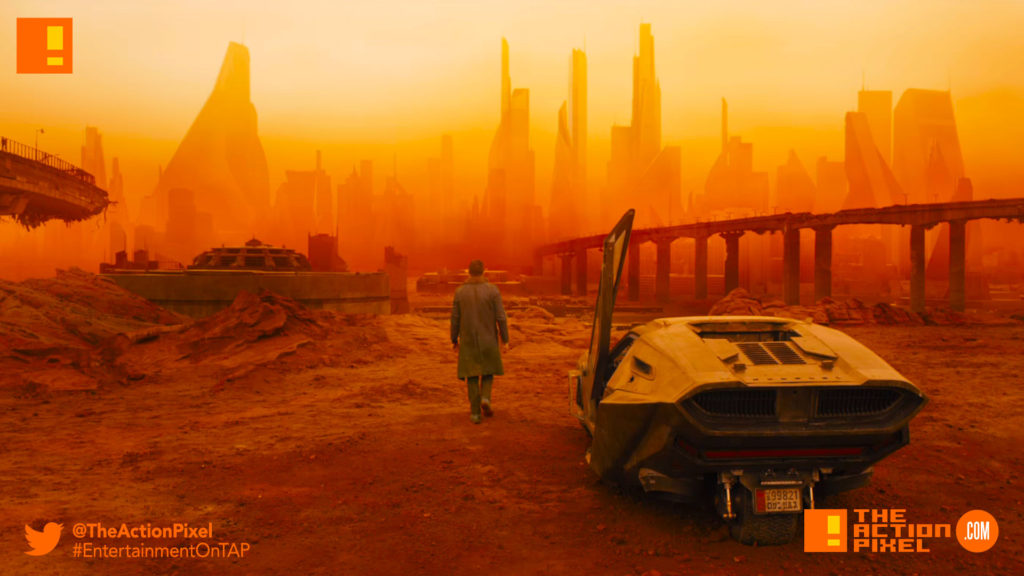 When it comes to IMAX, certain things are expected to make true use of the technology. And director Denis Villeneuve understands this well. Cityscapes and soulless man-crafted structures stood out as technological feats and eyesores all at the same time, a marriage of monotony and character. It created a very enthralling, atmospheric piece that intrinsically gave insight to the many issues faced by such a society without directly speaking on it. From the protein farms (pretty much growing maggots) to the failing crops and plant-life (from K’s fascination with an uprooted plant and Joi’s startled response to K seeing a tree, albeit a dead one). The weather also being shit. And while everything from sex to companionship is seemingly tailored to the individual, loneliness, Coca-Cola, Atari and (place plug here) Sony are all that survive from the world before.

It’s the kinda cityscape you wished Ghost In The Shell was a bit closer to. Each wideshot felt you were witnessing the breadth of greatness, a marriage of human ingenuity to simultaneously imitate and defiantly rebuke all that is natural. Cityscape varied drastically from the junkyard spanning miles on the outskirts of the city, to the ruins of the old LA, to the Mega-City One-esque towers and neon lights of a big-brother society. Definitely, Blade Runner‘s landscape is beyond setting. Even beyond character. It’s a premonition. Clairvoyant creed.

“The Chosen One” motif 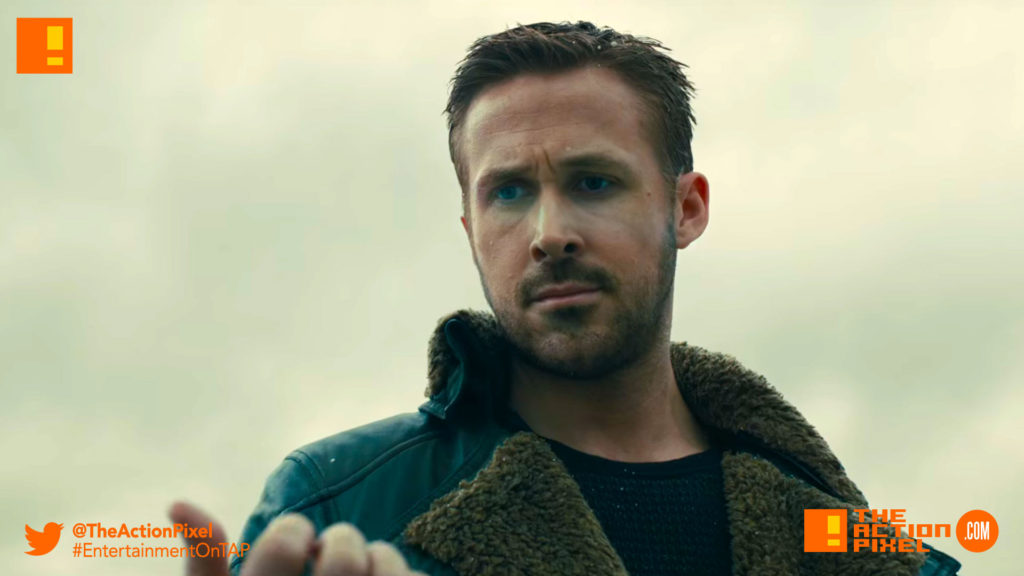 This sadly is becoming a slightly tired, overused motif of Hollywood. The chosen one. Neo. In this case it’s K, the (supposed) son of a replicant born. The key to a future where replicants are seen and treated as sentient beings. Not skin-jobs to be used to fulfill society’s menial tasks and the receptacles of human debauchery.

Niander now owns the technology that is used to create replicants and his yearning to creating a larger workforce has a supply/demand issue. Procreating replicants would put an end to that. He manages to get the remains of the childbearing mother. And K unwittingly leads him to the clandestine location of Deckard the father. All is needed is the child. The last component needed to replicate the replicant conception and brithing process.

But Niander isn’t the only one after the child. Lieutenant wants dibs to erase all traces of this anamoly she feels will add on to her caseload of societal corruption. It is still LA after all. But for K, this case conjures up a memory that is all too real, one he thinks isn’t the run-of-the-mill implanted memories that all replicants are given at creation to allow them to function and give their life a base-context.

It is the ‘twist’ at the end that added a bit of lime at the end of an otherwise malleable semi-robust drink. K isn’t the replicant of womb born. The woman, however, that confirmed his memory was the one who really turned out to be the chosen one. Dr. Ana Stelline. Deckard’s daughter. Ana crafts memories as an independent contractor for companies like the ones Niander owns. Well, that’s not exactly hiding is it? Ana apparently, by coincidence, was the one who crafted K’s memories based on her own experiences in an orphanage/child labor sweatshop. The focal point of the memory being a carved wooden horse with the date inscribed. The same inscription as the one on the root of the dead tree. ‘His’ birthdate.

Now, coincidences aside, the chosen one motif only becomes an issue with the short-lived reference to the underground movement comprised of replicants, led by the woman that witnessed the birth of the baby replicant, asks K to kill the abducted Rick Deckard in fear of what he may reveal that could compromise the location of the miracle child.

Alas, K isn’t the miracle child of a replicant. Nor is his vivid memory actually his. Twist! It was pretty evident who it was when it was confirmed that the child was a woman. Hell, we suspected when the records pre-blackout were accessed by K to reveal the birth and death records appeared to be doctored with specific references to their genders.

I am a sucker for intense electronic soundscapes. Something that was never meant to be registered by the human ear. The sounds of such provided a nice juxtaposition with visuals that are indubitably eye sores to humans who were never meant to live in cubicle apartments, walk on concrete and receive companionship from an AI appliance. At times I felt the sound was there to vibrate my chest cavity out as opposed to bolster the image. At one point a guttural, rising reverb, something you’d expect to accompany a reveal of some grand monolithic structure, was accompanied pretty much with previous footage of K’s making his way through Los Angeles concrete jungle in his dwarfed cruiser. 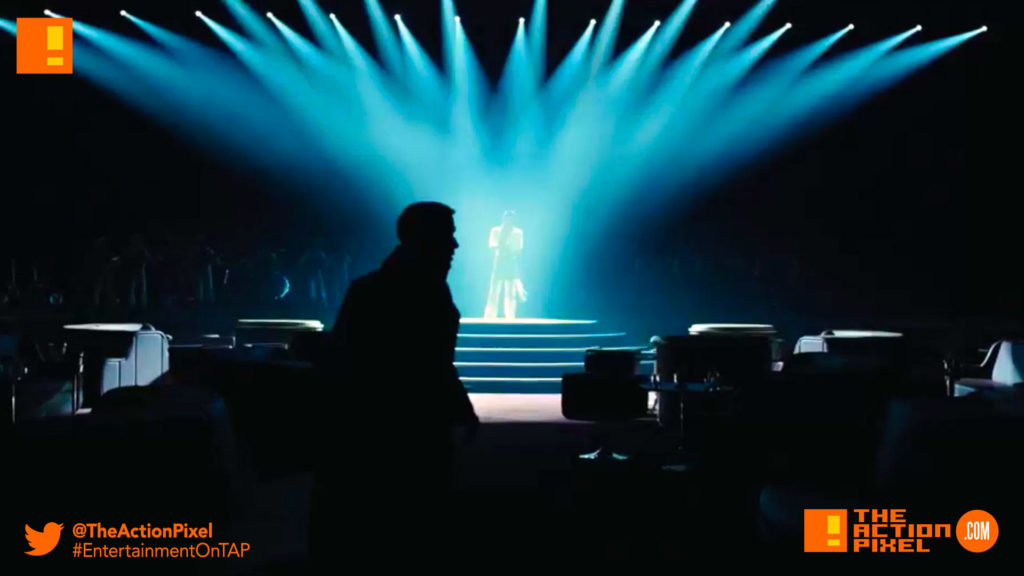 In all other scenarios, it just worked. The staccato-y, glitchy renditions of the corrupted Elvis hologram added some real intensity in the cat-and-mouse scene in the abandoned city between K and Deckard. And these sounds were definitely needed, as dialogue felt really skint in the feature. Not that it is a problem per say. The sound design and the image does go some ways to make it palatable. But as the film drags on it does become noticeable. 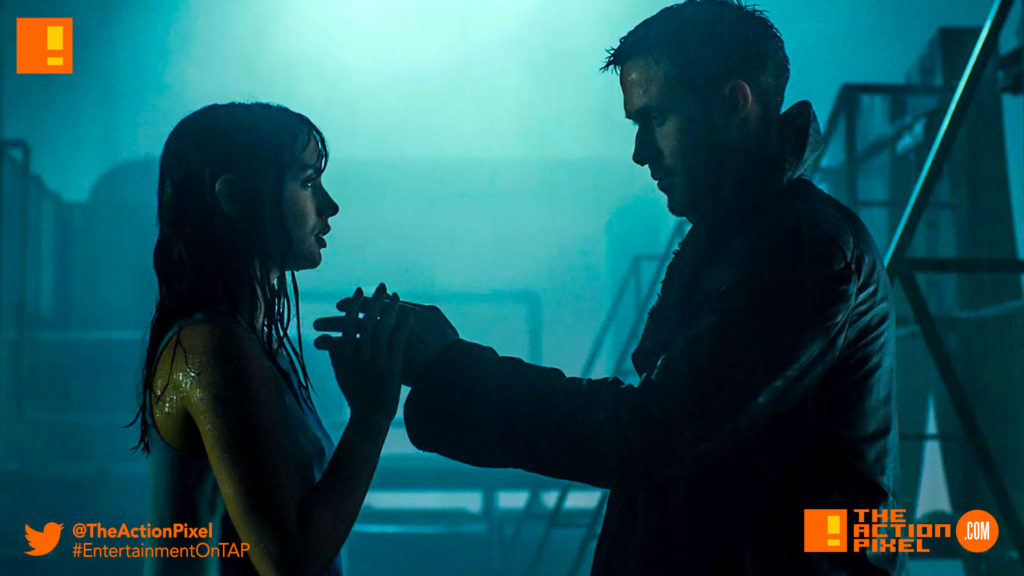 Let’s just glean over the fact that her name is a popular search term on Pornhub that, more times than not, will lead to self-gratification with added humiliation (during or after [I’ve heard]). Joi is the type of woman every dude need in his life. Bit of a side note. But goddamn, Joi is a trooper. She fixes you your favourite meal (a projection), stays at home (because she’s not real and only a device allows her to become portable). Comforts you and is a bouncing board for your thoughts. Get’s you a hooker because she sees you are lonely and syncs here projection with the prostitute’s movements; Joi tells the prostitute to stop talking to strenghten K’s sex fantasy, then asks the hooker to leave after the deed is done. That’s… that’s love right there. 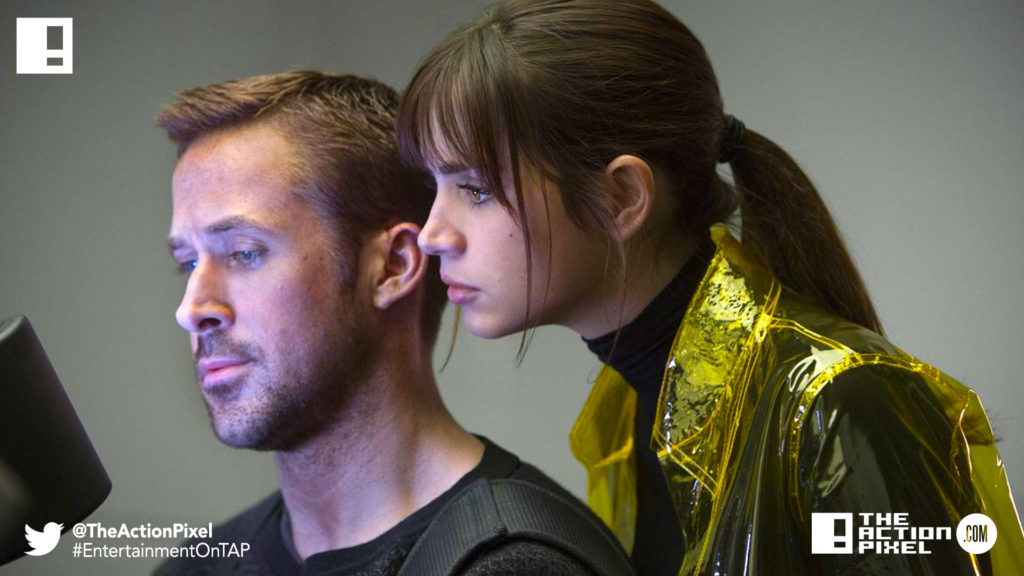 This relationship serves to show just how isolated and lonely K is as the disposable workforce of this dystopian society. Joi is the only real relationship he has which is sexy/sad to say the least. A relationship which becomes shattered when the only copy of her essence K downloaded into his new handheld device becomes crushed by the boot-heel of Niander’s goon-ness. 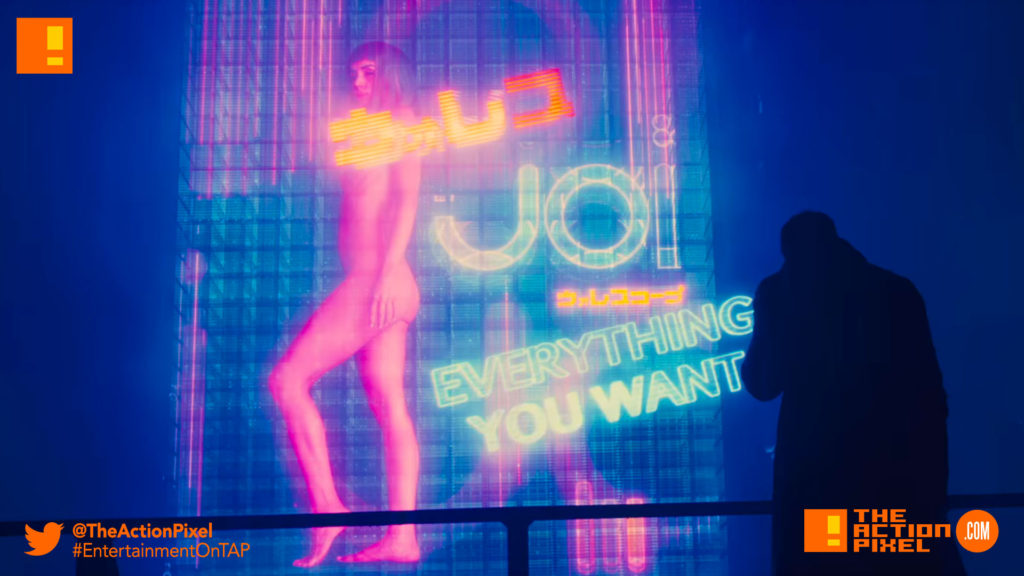 His constructed fantasy crushed further still when K sees a sex-ad bearing Joi’s exact likeness appealing to the ‘every Jo’. Joe. The name that Joi christened K with when he thought he was the one of a kind child of a replicant, a Pinnochio who became a real boy. All lies. Nothing is sacred. Individuality, love and devotion are all simulations here. Cookie-cutter constructs dressed in the garbs of idiosyncrasy. A bi-product of a technologically-connected/human-disconnected world. 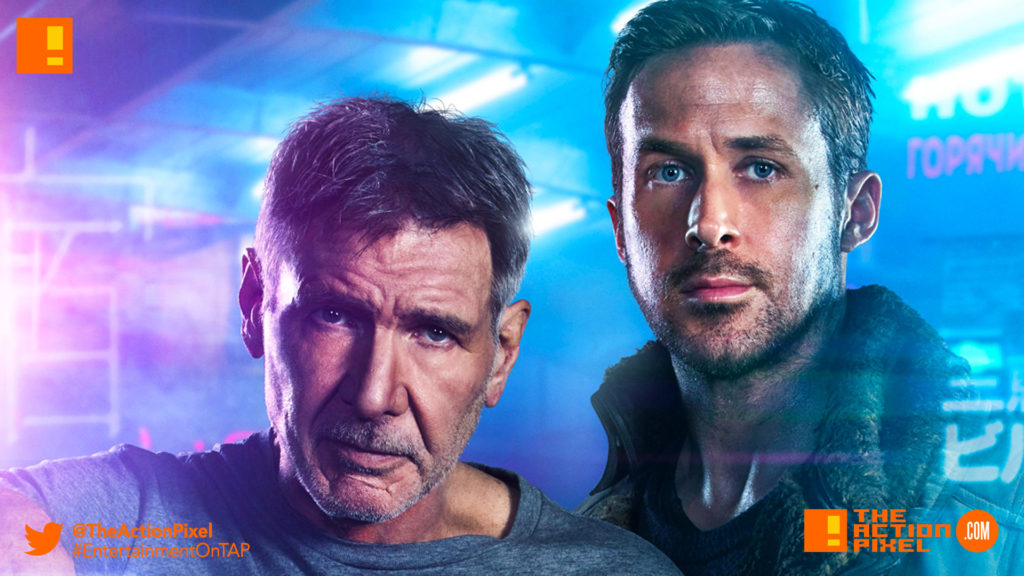 Blade Runner 2049 cinematically is a brassy piece of work. The wides give great scope and insight into the soul-drained metropolis devoid of real life and connections, save for the little flourishes of individuality and hope. Visually, Blade Runner works greatly. And it is with these visual aspects things can get a bit muddled, however. Strip the visuals and the sound away, you are left with a ‘chosen one’ trope that has been flogged to death by Hollywood, with a twist that didn’t churn your guts or wow us into reverence of an intricately crafted narrative masterpiece.

This is not to say it’s a bad thing, but one could argue the strength of Blade Runner 2049 also serves as a cloak to conceal its weakest parts. A narrative that has all the most compelling dialogue exchanges existing in the trailer. A narrative that introduces an underground cult of Replicants that seem to be more plot device and integral plot points. This underground movement of Replicants charges K with the task of killing Rick without any sense of personal repercussions or motivation to do so. He knew he wasn’t the chosen one. What would compel him to save or kill Rick in mid-transport? This part was unclear to me. Maybe I missed something. Tends to happen with the visual takes focal point; you get lost in the simulacrum, not the narrative. Like a well-executed anime with an average – mediocre narrative.

Rick Deckard noticeably isn’t a point central focus to Blade Runner 2049; his purpose on first glance seems to add a palpable connection to the film prior the sequel. This was something I didn’t expect, but it worked out well in the end. I did expect him to either go ham / get pain stricken when Niander resurrected the very visage of Rachael. Like making a zombie puppet of your one true love. Goddamn, brutal.

The shorts I felt were a nice little addition to the overall narrative. Necessary? Not really. But any excuse for anime is a good one. Especially from Shinichiro Watanabe

In ending, Blade Runner 2049 tries its endeavor best to be the visual and sonic spiritual-successor of the Blade Runner film, and it succeeds in this regard. From the literal opening to an ECU of an eye like the first film. And as great as this is, the existential dilemma and themes of conformity and individuality are not as integral to this narrative but rather a bi-product of a classic over-used trope dressed in the ostentatious, albeit impressive, garbs of an emperor. 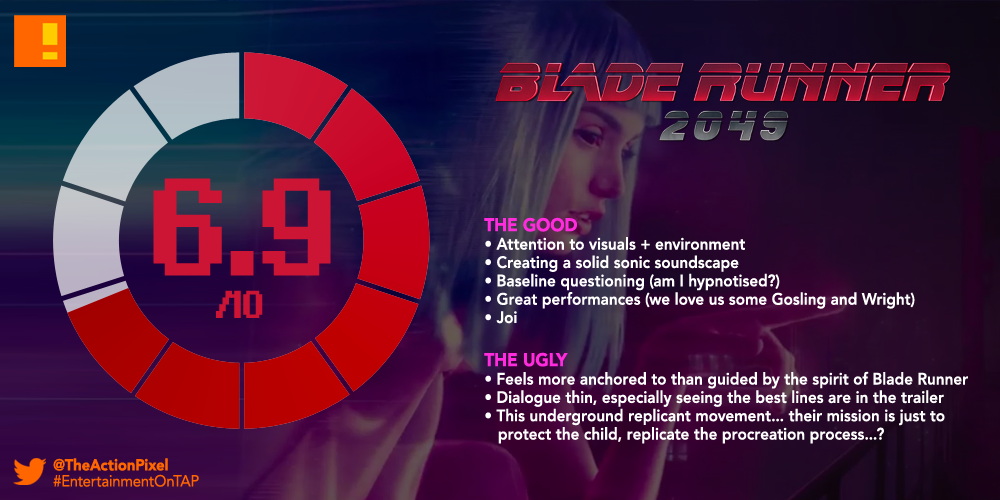 “Star Wars: The Last Jedi” places the entire legacy of Jedi Knights on a razor edge in the official trailer