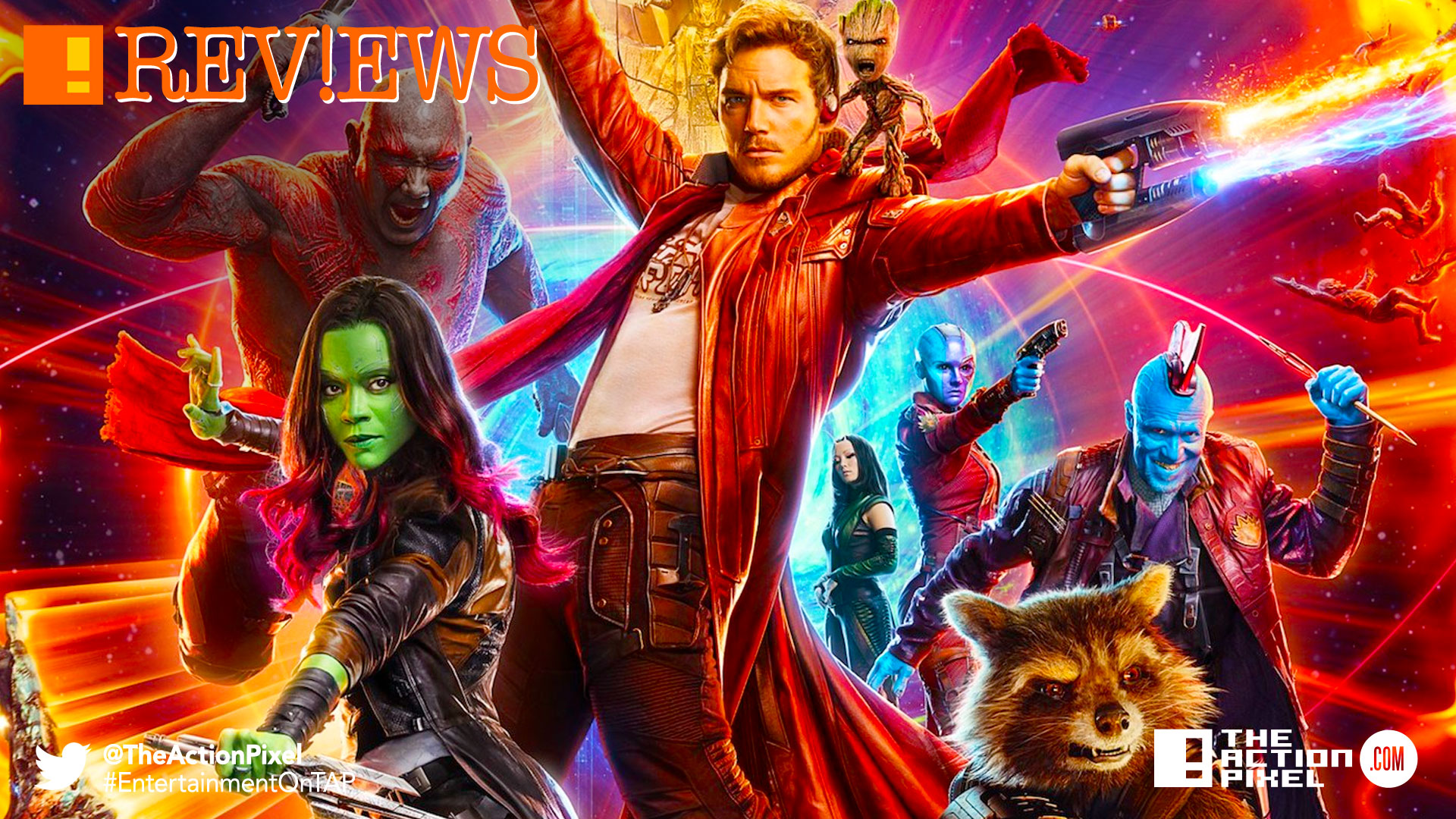 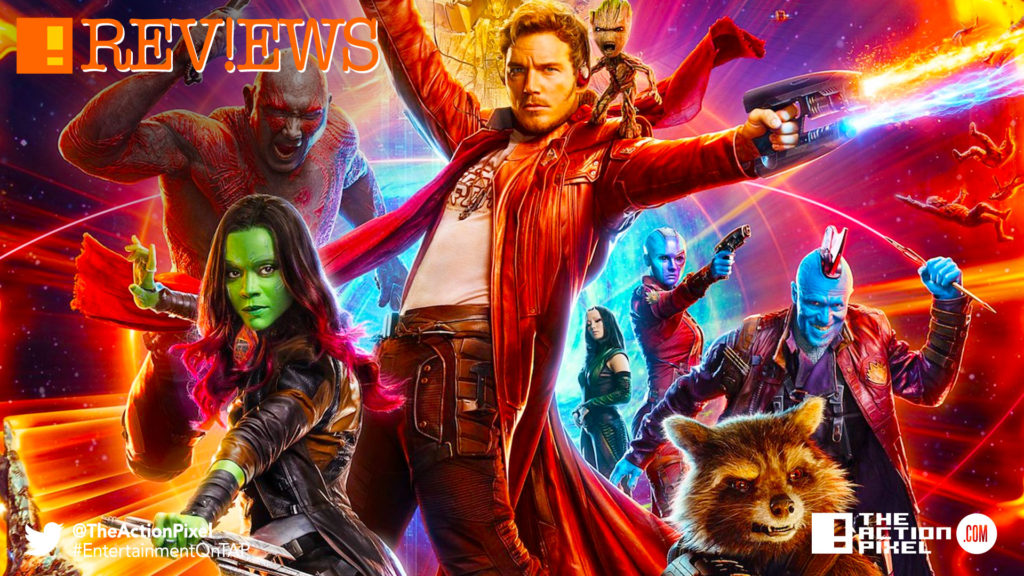 Marvel has been killing it in the box office with their sequel of the space opera comic comic book movie – Guardians Of The Galaxy Vol. 2. And with all the posters and trailers that seemed geared to focusing on a baby Groot grafted with equal parts comedy and mayhem, we got drawn into what will be the closest thing to a full-fledged comedy we’ll ever see from Marvel. Hell, after the way DC and NBC’s Powerless went I don’t blame them.

So not seeing much in the way of a synopsis we went in with clean palettes. And as such, this should be an interesting dissection, to say the least.

Let’s get it, friends.

Kurt Russell is a serial impregnator of species and planets 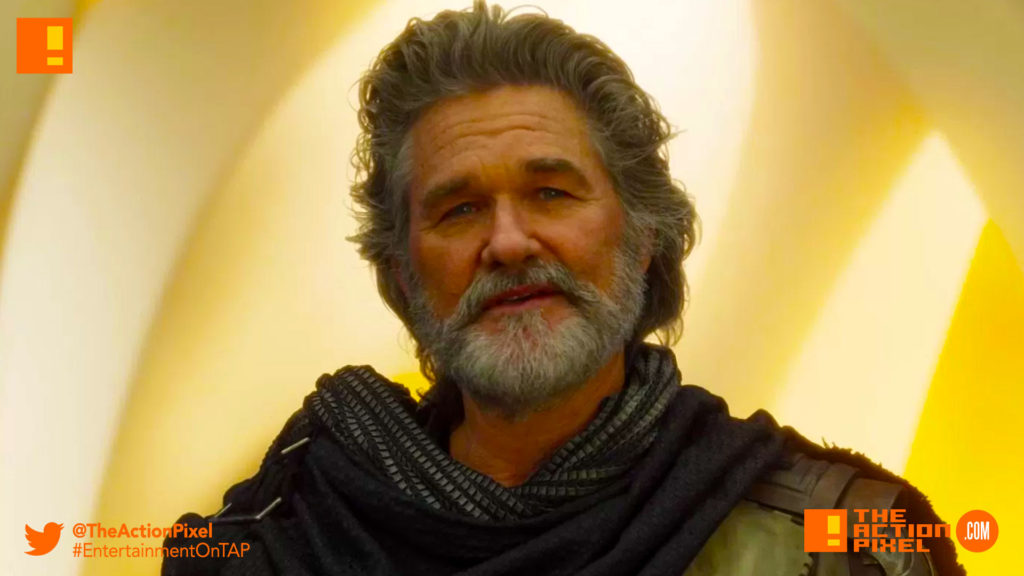 We start off in Missouri in the 80’s with an oddly, constantly smiling, swollen dimple-cheeked Kurt Russell in loves eternal bliss with Peter Quill’s mom (before he was born, of course). And though he may have planted his seeds in his mom, he was planting some other seeds with even further reaching consequences. You see, as it turns out, Peter’s dad is a Celestial; so that makes Star-Lord a demigod.

And if it is one thing the GoTG Vol. 2 seems to be about is reunions. Ego finds his long lost son, Gamora gets to trade her rogue sister Nebula for a bounty. All heartwarming stuff. But after completing a job for the Sovereign – snobby gold people – things go south when Rocket decides to steal the very thing they were paid to protect.

They, however, manage to escape the Sovereign, with the help of a man who turns out to be none other than Ego (Kurt Russell), Quill’s dad.

But as the story progresses, we find out Ego’s eternity is guaranteed only by feeding the very core of the planet he is connected with, with the celestial gene that exists in his children. And apparently, he has been spreading his seeds in a galactic wide sex fest. So there are many kids to keep the planet’s core burning.

Not only that, he’s been planting weird organisms that are set to transform every planet into his image and vision of a perfect universe. Planets covered in blue globs. Fantastic.

I Am Groot. Christ. 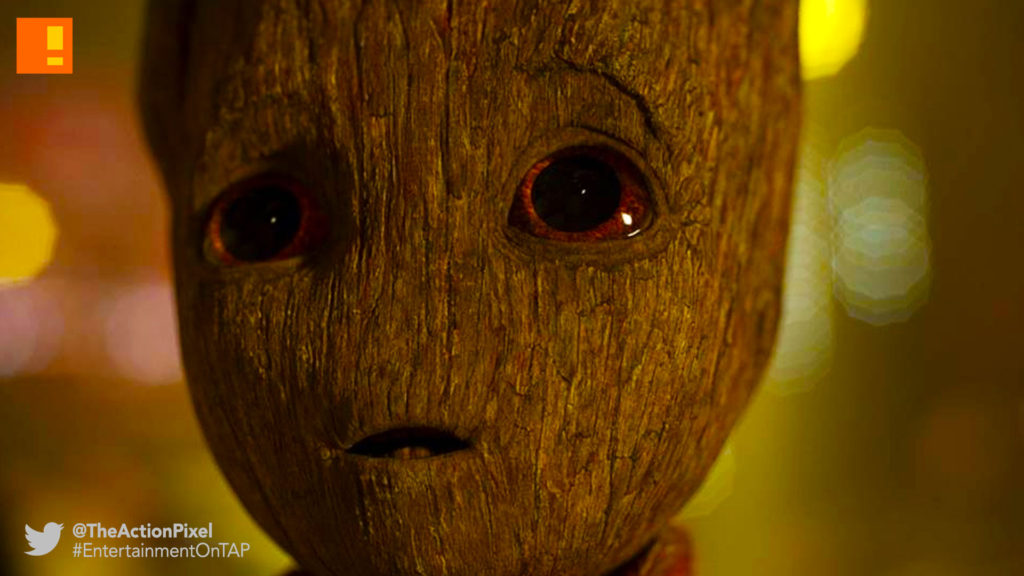 Groot, can we say for the most part, was adorable. With gags that went on for an iota to long in places. And whilst that may be okay in sitcoms and series, for a film, believe it or not, that is a problem. Much like that friend on Facebook that couldn’t be bothered to buy a condom 9 months ago when he was sticking it to his girlfriend. Now your timeline is inundated with pictures of an average-looking baby.

The title sequence was essentially Groot dancing and taking on the world one small alien rodent at a time whilst the rest of the team battled an energy consuming tentalcle space beast from another dimension. A sequence that was all too long by the way, because no one was paying attention to James Gunn’s or Vin Diesel’s overly-inflated accreditations.

And then you think, “Vin Diesel got paid to utter 3 words that then gets synthesised to sound like a baby”. How to piss off any voice actor. That’s correct. Overpaid acting rolls for 300, Alex Tribeck.

Groot’s dimwitted charm could have used at least one extra injection of gravity during the more intense moments and climaxes of the film. Babies are generally smarter than you think, after all.

Marvel’s Ego is as big as a planet 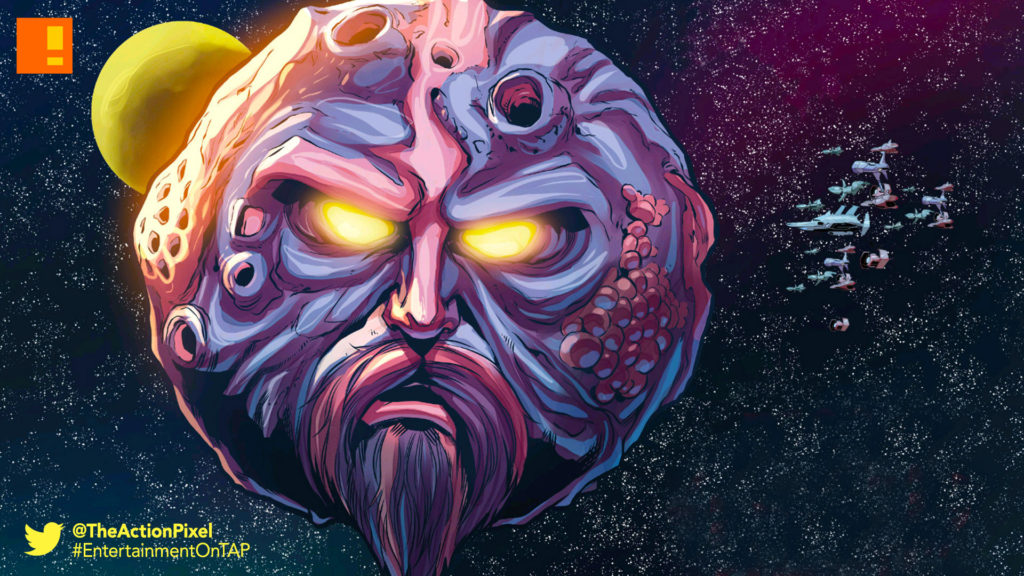 People were essentially seeing as much as this film was okay, GoTG was better. And this logic we kind of understand.

Sequels are a difficult thing to get right. mainly because some sequels are a mere afterthought following the success of the initial film. Secondly, when executing a sequel, it’s best to make it an arc within the narrative flow of things. Meaning, you respect that the film – both singular element and as part of a trilogy or body of work – will have a beginning, middle and end.

This GotG Vol. 2 however felt different. And here is why. GoTG had clear goals. Being past of the MCU, the Infinity Stones and all that malarky, and there were concrete tasks that the team had to execute, and adversaries to overcome in achieving it. In GoTG 2, everything happens to our merry bandits. Coming across Ego, Rocket getting captured. No real proactivity happened until half to 3/4 of the film was done. It wasn’t like Peter was in search of his father or any real quest that would encourage their paths to cross.

But as it turns out Marvel is a Death Star. Too big to fail. Hence why what feels like an extended sitcom episode in the far-reaches of space is doing superbly well in cinemas. This film didn’t feel like part of the build up to a GoTG trilogy. As for clear narrative goals, Vol. 2 felt more like a sitcom filler episode than a movie. Would we be as forgiving if a film like the Matrix had a sequel that was an extended version of an Animatrix episode? Don’t think so. 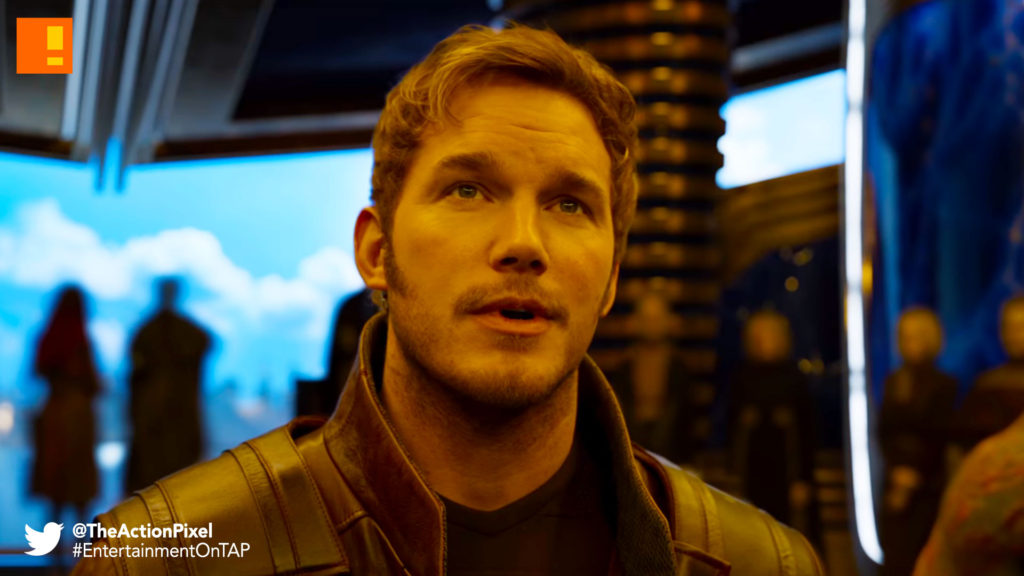 The best parts of this film you’d have certainly come across in the trailer. Chris Pratt is as funny as ever, and his comedic timing is flawless. Hearing Rocket’s many accolades like ‘trash panda’ to Drax socially-inappropriate snafus are a right laugh.

There were some heartfelt moments too with the death of Yondu, Peter’s surrogate father, who was charged by Ego in his younger days to smuggle his children back to him. Only when Yondu found out what Ego’s off-spring was used for, he kept Peter away from him and raised him on his own. And earlier on in the film, Sylvester Stallone’s character, Stakar Ogord, spoke on exiling Yondu from the Ravagers for smuggling children and not even being able to get a proper Viking-esque sendoff when he dies. However, in the end, Yondu gets what he wants in death – equivalent to a 21-gun salute during his funeral procession. And it is well-deserved, as he died risking his life to save Peter. And let’s not forget that awkward makeup between the Thanos sisters. Who’d have thunk only moments earlier they were trying to kill each other. 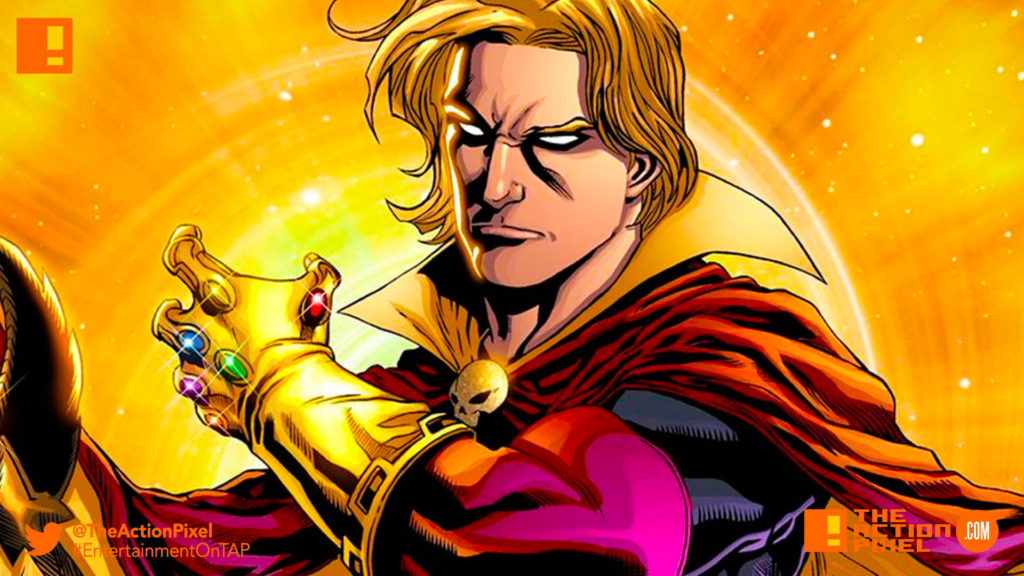 And the major tease during the post credit was the Sovereign imminent creature creation of Adam. Not the biblical kind, though the reference does have biblical context. We’re talking Adam Warlock, an artificially-created human deemed perfect in every way, and ultimately gearing GoTG back into the fray of the MCU. Because Adam Warlock in the comics is known to eventually possess the Soul gem, one of the Infinity Stones. And with that, Thanos can’t be too far behind. 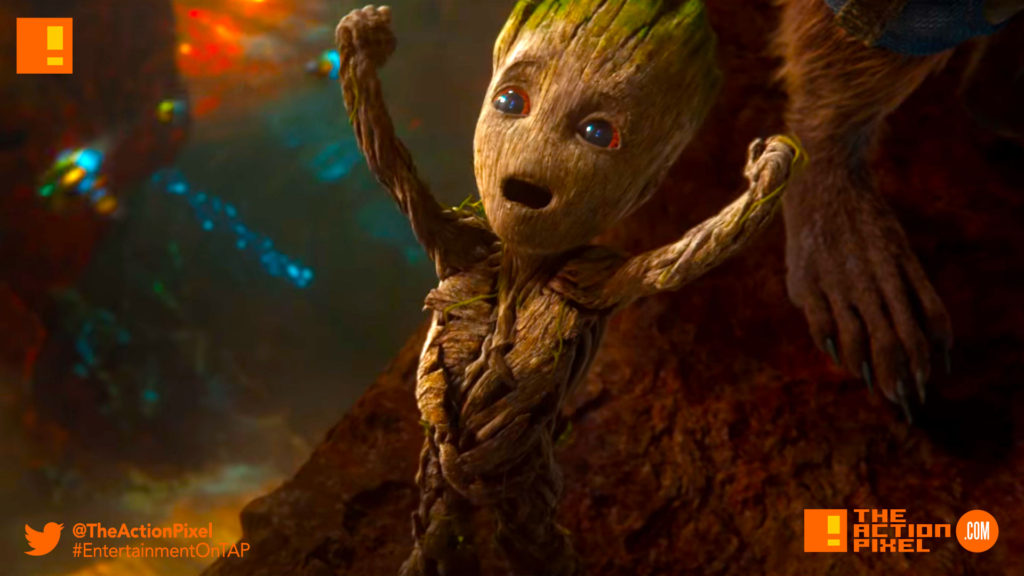 Guardians Of The Galaxy Vol. 2 was fun. Drax and Star-Lord brought the comedic gold for the most part with Mantis for the assist; Gamora and Rocket were the setups. And Groot, well, he was a cute distraction. Doesn’t change the overall consensus that Vol. 2 was more fun than substance / direction. Or in any way particular in the greater scope of things. Nevermind the Marvel-verse. We’re talking the basic art of the trilogy. As such Vol. 2 felt like a fire (to average) mixtape that a rapper dropped just to keep his name in your ear during his slight off-season. Not a dope album that is set to change the game forever. And I think what is most disheartening is that they used a baby Groot as a crutch to get away with it. 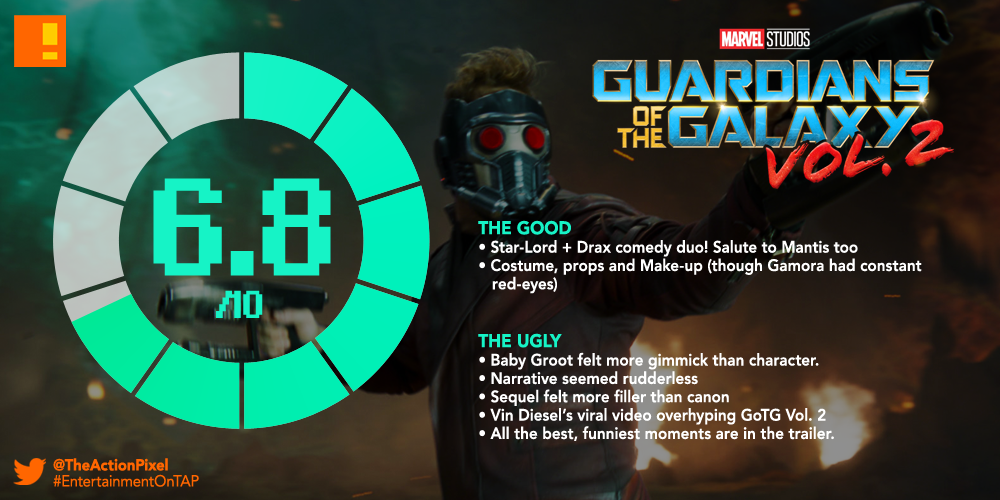 Does anyone find Stan Lee’s cameos delightful? Do they all have to be glaring or can we have more subtle ones to even things out? Have I just blasphemed by even thinking that? What do you guys think? Tell us in the comment section + via Twitter @TheActionPixel

#TAPQuotes | In “Attack on Titan”, destiny is choice