Vampires have always been a fascination in popular culture. “Dracula” and Transylvania is Romania’s only tourist attraction they are proud of (right?), and we can’t seem to get enough of the (sexualised) blood-letting. But ever since the Twilight and True Blood generation, we’ve been turned off by the night dwellers, who’ve gotten all ‘metrosexual’ on us. So while you let Edward Cullen hold your purse, animation may just have the answer to our lacking of real vampires. So check out T.A.P. 10’s Animated Vampires who don’t feel it necessary to stay along the grain of Twilight in producing ‘celibacy porn’ for little prepubescent girls.

Yeah. This made TAP 10. And what!? If you’re an 80’s (British) baby, seen a few Danger Mouse episodes, you will know about Duckula. Here, vampires can die like normal: stake in the heart, exposed to sun light. But if they get killed, a temporal-significant ritual executed by his lessors could reincarnate the dead Duckula back to life. But apparently you can’t get good help in the baddies department, because the ritual was not executed right (how do you confuse ketchup for blood?), and the evil lineage of Duckula comes back as pathetic, sickly and quite stupid Duck. So much for that then. But Duckula still has his moments, and the intro still is more scary than the whole Twilight trilogy combined.

Not bereft of humour, wisecracking bats and equally oafish characters, Duckula was the last of a dying breed of British Animations that at least made an effort to entertain.

9.) Mina Tepeş
in Dance in the Vampire Bund

For those into a bit of supernatural romance with a bit more bite, you may want to check out the princess-ruler of all vampires, Mina. Vampires are quite lonely dead things, so Mina decides to build a go-to community for fellow blood suckers call the ‘Bund’ in Japan, in exchange for paying off the whole of Japan governments debt.But now that the world knows vampires exist, tensions run high as the super-idealist has to deal with human fears and extremist vampire breakaway cells. A vampire with a soul? That makes sense.

She also has a werewolf protector called Akira, so pretty much it has that Twilight feel, except you can tolerate watching Dance in the Vampire Bund without wanting to disembowel yourself on a rusty screwdriver.

“A chaotic clash of opposing forces”. Okay narrator. Calm down. We are talking old school vampires here, deathly pale, cape draped across the face revealing only the glowing red eyes, transforming into man-bats and fangs that glow… you can’t complain about a classic render that pays tribute to Bram Stoker’s Dracula. It gets tedious to watch at points but with Dracula’s cold stare, hard jawline and Clark Gable type hair, this Dracula has got the Halloween classic-look lock down.

Staz is a bum in Demon world, who loves everything the human world, particularly Japan has to offer. We are sure there is some social commentary here about the Westerners appropriating a sycophantic, vampiric lust for Japanese anime culture. But we digress, Staz is new school vampire, who wishes to go drinking blood in the human world like his ancestors. But when a human girl somehow unwittingly enters the Demon World through a portal, he takes it on himself to protect her until he can get her back to her world safely. Which is hard enough because she is quite the tasty treat.

Not much to look at, but this vampire has quite the following being a gang boss, so that has to mean something… right?

Miyu, like other specific types of vampires are Dhampirs, or born of vampire and human parentage. Which is technically Necrophilia. Eeew. As a Shinma, basically a god-demon, from time to time get into the human world and being part-Shinma, Miyu has taken it on herself to banish these stray Shinmas back to where they came from. An with a demon as a partner know as Larva, we understand how the lines between good and bad may seem non-existent.

Marvel made a string of anime-infused stories of their beloved roster of heroes, with Blade snagging a series. It was a bit too much with the calling-out-special-sword-move-attacks. Blade was never Jūbē from Ninja Scroll. But Blade has always been a classic tale of a half-vampire who has the best of both worlds, having a vampire’s strength with none of their weaknesses. Save for the blood-thirst. That is if you buy into the whole ‘preserve human life’ thing. That bites.

Blade uses this Vampiric power to hunt down Deacon Frost, the guy that turned Blade’s mother, and dismantle the vampire secret society known as “Existence” is a kind of acceptable self-hate that you don’t see quite that often.

Alucard is pure pimp. He saves police officer Seras Victoria, an innocent, naive ‘police girl’ by turning her into a vampire so she would not succumb to a fatal gun shot wound… a gun shot wound which he caused. So as a vampire, mild-mannered Seras joins Alucard as a loyal servant, bound to obey her vampiric master, and, by extension, the Hellsing Organisation that Alucard also serves.

Seras story cements itself in the exploration of her newfound abilities and the ultimate acceptance of her fate. Her maturity in her vampiric sensibilities is a slow one, but she soon develops a blood orgasmic-lust that almost makes her a worthy underling of Alucard’s. Now only if he’d call Seras by her real name and not just condescending “Police Girl”.

Girls in school uniform. Kill-La-Kill, High School of the Dead, Hit-Girl that one time from Kick Ass. I’m not sure about you, but high school was never a ‘sexy’ time for me. Then again, perversion only starts when you get older.

So it’s not surprising Saya is forced into short-skirted uniform to blend in with a school populace whilst on the hunt for morphing monstrosities called chiropterans. She may look young for her age, because well… she is centuries old. Saya is the last living true vampire, and she doesn’t take kindly to counterfeits parading around as the real thing.

So what’s been keeping her going? A bloodlust for revenge, obviously. A cute little bundle of bad-assery and rage, Saya with a blade is about as deadly as you can get.

We all love the silent type. Another half-breed ‘Dunpeel’ is pretty much despised by vampires and humans alike. The Hunter D traverses dangerous lands to rid the world of the vampiric threat. For money, of course. But god forbid if a vampire ensnared another human partner to give birth to another half-bastard Dunpeel child like him. Lot’s of self-hate going around in Vampisland.

He also has the added bonus of his Left Hand- a parasitic, talkative cancerous growth in the middle of his palm. The duality of the silent wanderer and talkative tag-along is a dynamic that today rings a familiar trope-bell, with the likes of Afro Samurai and Ninja-Ninja. Hunter D’s bad-assery level is underplayed by his quiet demeanour, but don’t be fooled as he’ll go for the jugular once things heat up. Meier, a bad-ass Vampire who Hunter D hunts in Bloodlust, admittedly deserves a number amongst the all-dead all-stars, but we think he was too lovestruck to show up. With a human more less. I guess there is no stop to getting half-breed vamps filled with internalised hate then.

As far as the vampiric creature is concerned, they are typically seen as tragic lonely souls or evil. But Alucard is neither. He is evil incarnate who’s vampiric powers aren’t hooked something as feeble as blood infection or the likes. Alucard is the only vampire it seems that is deeply rooted in the supernatural element. A powerful shape shifter armed with a combat pistol called the Jackal (which really is just a mini-cannon), he has levels of power that he taps into via a gradation system known as the Control Art Restriction System. A truly horrific sight.

Alucard can only access Level 0, the most horrific level of his restriction system, with the permission of Ms. Hellsing. There’s like a blanket of darkness with eyeballs everywhere… a dog made up of pure dark matter… all very disturbing sh*t. 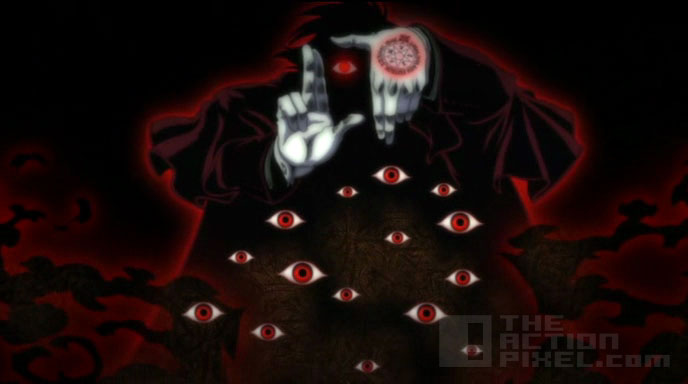 Ms. Hellsing is the head of a secret supernatural-policing organisation set to keep baddies in check in good ol’ Britain and the rest of the world. Strange she would have the most dangerous incarnation of vampiric evil in her employ, but I guess loyal pets are a hard thing to put down. Especially if said pet is a near-immortal, psychopathic, sanguineous creature of pure evil.

He’s boastful, arrogant, near immortal, loathes human weakness and makes no qualms about belittling anyone lower than him… which is everyone. And with Alucard’s only objectives being to serve the head of the Hellsing Organisation, and to die a worthy death by human hands, anything else on Alucard’s to-do-list is for pure pleasure of the fight and the kill. So pretty much no one is safe, whether you’re a Roman Catholic, a Nazi, or another wanna-be Vampire.

So with all that said, vampires are here to stay. Eternally… as far as narrative goes. Many, if not all the aforementioned had their start on the panels and spreads of a manga or comic. So that should show you the narratives these eternal characters are hooked into had a solid start; strong character development and narratives that have been reinforced with the release of every serialised issue. A lesson is in there somewhere. So while you wait for Hollywood to catch up, we’ll be here thumbing through some Blu-Rays bringing the dead to life the right way.