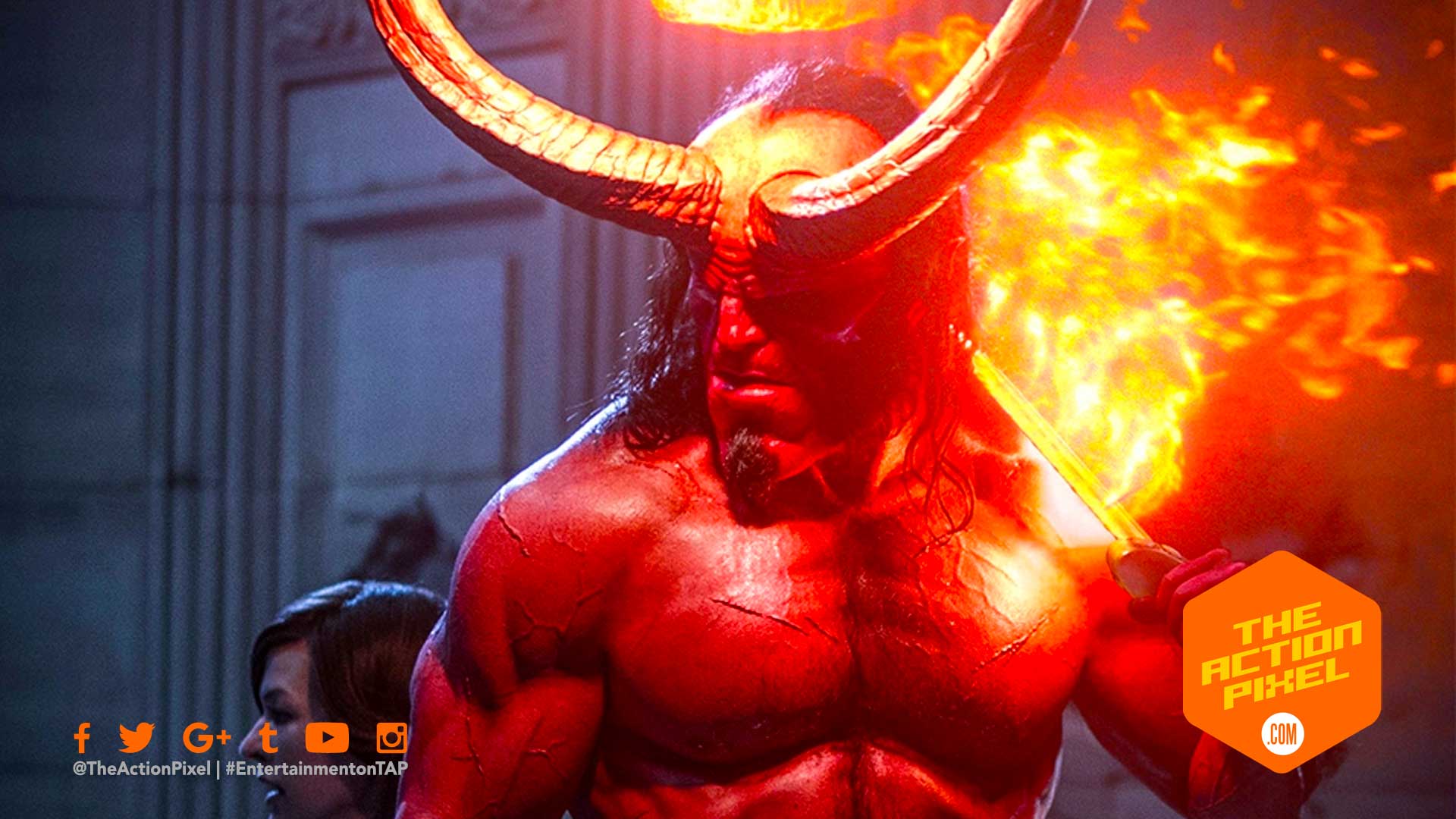 Hell hath all the fury as the reboot that everyone kinda wanted in a way hit cinemas – Hellboy. And whilst hell’s thrown and the destruction of the world at the hands of a demon was the build-up to the planned but unfulfilled trilogy of the previous Hellboy, this Hellboy movie adds much of a fast-track to any foreboding and anticipation by giving it all to us. In the trailer, albeit.

David Harbour may be sitting on the throne of our hearts when it comes to Stranger Things, but does he have what it takes to raze cities and raising hell as Hellboy?

As they say, the devil’s in the detail.

When your demons got demons…

Milla Jovovich’s Blood Queen – Nimue – was a bit of a naughty nelly back in the glorious days of the Dark Ages in England. You know, releasing the Black Death and all sorts of pestilence in protest at how creatures of the night were being treated.

To mitigate the horrors, she and King Arthur met to make a truce of sorts. Arthur however, was not about to keep a sacred bond with a witch impervious to mortal attack. Ultimately, King Arthur ends up striking her down with the enchanted blade of Excalibur. The Blood Queen, beheaded and quartered, had the remains of her carcass strewn across the land in blessed chests. All in an effort to keep her from ever stitching her parts back together again like – as Hellboy put it – a supernatural humpty dumpty.

She of course, with the help of loyal subjects manages to have her parts reconjoined in the present day, and her sights have shifted to the unholiest of matrimonies. Hellboy – a creature born of a last-dash Nazi effort to turn the tide of World War II in there favour – is Nimue’s desired king behoved to world annihilation.

Professor Broom, charged with destroying any supernatural monstrosities went against all instinct and preserved the life of Hellboy, who was brought to earth during a ritual performed by Nazis back in. Broom raised the creature to do good as an agent of the BPRD – the Bureau of Paranormal Research and Defense.

And when bubble bubble toil and trouble starts brewing in the good ol’ modern day England, the demon, the witch and the occult Osiris Club begin converging on a path that either want Hellboy to reach his most destructive potential, or just want him undeniably dead.

As such, Hellboy fights the good fight, killing many of his monstrous brothers and sisters whilst sporting the signature shaved horns, symbolic of his renunciation of his origins. However, it has been pre-destiny would have it that Hellboy would be the key to bringing death and Armageddon to humanity’s doorstep. So does Hellboy fall for the “power to the evil/destiny” schtick Nimue peddles? Or did he really believe his so-called daddy Professor Broom’s “Hey, humanity is worth saving” ideology? Nature or Nurture?

As usual, being such an epic thing to see Hellboy in his most true form – horns all the way up and out, a crown of flame that floats above his head, with a sword christened by hellfire is a terrifyingly awesome visual that will never get old.

However, Hellboy, despite his devilish charm, is a good guy, so we never really expect to see this visage of him unless it was a visual representation of a possible future. So understand we were happy to see him give in a little when he seemingly embraced kismet and held the enchanted sword of Camelot for reals. The sword that could only be held by someone of King Arthur’s lineage. And Hellboy held it just fine.

David Harbour’s Hellboy was great. Some of the comic book charm I felt that was in the first Hellboy series got slightly skewed in translation, but other than that, I suspect there were no complaints in the aesthetics department.

Tears of Soy (Sorrow And/Or Joy)?

That first sequence was, at the very least, an odd pairing of scenes. We start expecting a world of supernatural horror and humour. The heavy-handed breaking of the phone case under his stone fingers. The nonchalant attitude of Hellboy investigating a missing agent who was last seen to be investigating a vampiric threat in a Mexican dive. Tinges of Dusk Til Dawn, but whatever. Then we get a bit of Lucha Libre, which is always over the top theatrical and entertaining in scope. Which, in this movie, was not really.

Hellboy, as it turns out, was a tad bit late with the rescue as the wrestler (who is the missing agent) in the wrestling ring has already been turned into a vampire. Not your sexy vamps either. The ones that transform in hairy bat-people.

This is all fine I guess, until you realise Hellboy was sent into a vampire den, but there was only one vampire. And apart from that, Hellboy ultimately kills the compromised agent to protect himself. Now I was honestly expecting a inadvertently funny quip. Hellboy then trying to explain the circumstances to the BPRD. You know, things went – pun intended – bat-shit crazy and it was all out of his hands.

However, the awry situation suddenly took a serious note, a change way quicker and notably odder than the vampiric transformation itself. The agent was a friend friend, and his last words before his death had tones of ominous premonition. And the death hit Hellboy so hard the camera had to distance us from his pain by jibbing out. It honestly felt this scene’s script was an amalgamation of two slightly different drafts.

Flashback as a means of lobotomy

From the title sequences when from their usual colours to black and white, robbing the Millenium ident of any colour and vibrancy, I figured more or less we were going to a flashback scene. And the opening scene does just that, to the fucking Dark Ages in the time of witches, Camelot and King Arthur.

The rest of the flashback / callback scenes are not transitioned with an ease in but a whiplashing shove. Which worked for the most part. I found my brain working harder than usual to keep up with the dialogue and cacophony along with the flash and fury of the visuals. Maybe this form of edit was leftovers from Milla Jovovich’s Resident Evil phase, but not as nearly as spastic.

It was that last flashback spurred on by Merlin however that was nauseatingly spastic. By the time you wrapped your head around the idea of a woman who is descendant of King Arthur falling for a goat-demon, she’s chained up ritualistically and is having a baby on an altar in hell… like Jesus Christ. Flashbacks often gave us a unique vantage point of the narrative that we would not otherwise know. But the new information we do get is, for the most part, public knowledge or not terribly consequential.

When your post-credit tease isn’t a tease.

The Abe Sapien was sure to show up at some point, and Hellboy chose the amphibious man creature as the tease of what is to come in the sequel sense. Which sadly fails to fill the heart with great anticipation or yearning.

Hellboy‘s original stalled trilogy seems to be a precursor to everything we’ve seen in Hellboy, and with the narrative making much in the way of new arcs or adaptations, Hellboy dangerously rain-dances on the outskirts of rehashing the same old stories.

Or how about the overzealous Ben Daimio who hates Hellboy with a passion. Sure he’s hell incarnate, but that level of disdain must be a mask for something deeper. So, when suddenly gets hand spasms, which he takes a sedative for, it’s not a far cry he’s hiding something beast-like and his hate is nothing more than transference.

I’m a fan of the trope, do not get me wrong. It is just the hella overused ones that are barren, wasteful things.

Hellboy was an average watch. The introduction of this red brute, however, was not something that burned into the mind’s retina, nor was the story unique enough to separate and/or elevate itself from prior film narratives. And isn’t Hellboy more urban legend than walk and be seen by everyone?

There were great sequences nevertheless; Hellboy taking on the giants amidst betrayal from the Osiris Club, and, of course, bring hell on earth. With those weird gargantuan monstrosities destroying London.

Needless to say, despite not being terribly compelled, I would go to see a second film. So long as the trade-off for my time is worth it. Because as it stands, Hellboy had us risking or mortal souls over Easter for an end result that did not nearly enough to embellish the allure of the big Red Guy.

#TAPReviews | "Hellboy"
4.4 Reviewer
0 Users (0 votes)
Pros
Cons
Summary
Hellboy may have got the look right and took great visual and footnotes cues from the comics, but alas adaptation to film is a beast unto itself, and a bit more is needed to make the reboot a memorable feat.
Story
Characters
Design/VFX
Music/Dialogue
What people say... Leave your rating
Sort by: