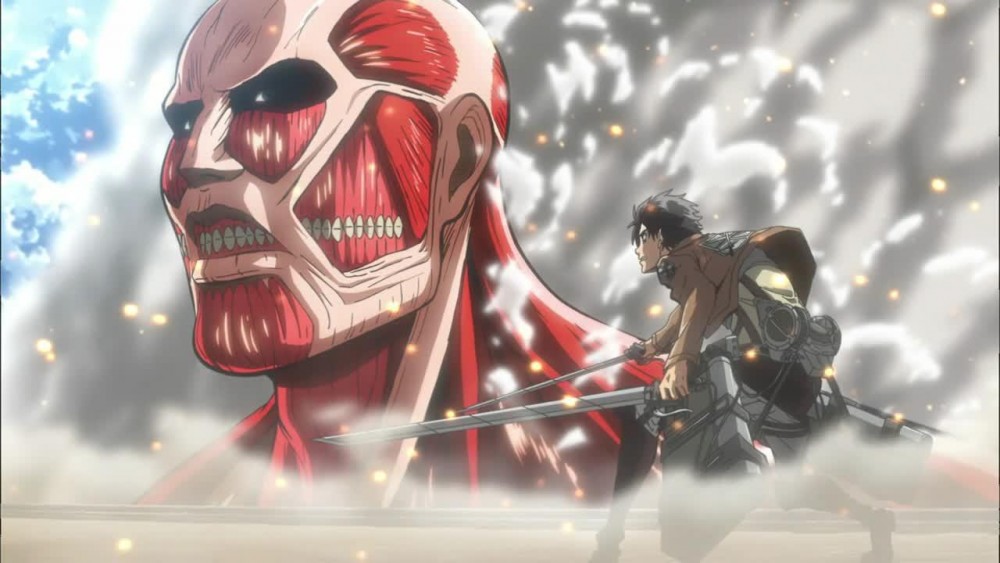 In a new series our intrepid reporter Stuart Young dives head-first into the mysterious world of Manga having never experienced a single volume of the popular japanese artform before. First up it’s Attack on Titan book 1:

I recently realised that I had a glaring hole in my geek credentials. I’ve never actually read any Manga –  despite enjoying western comics and the odd animé. So I challenged fellow T.A.P contributor Amer Iqbal to pick out some examples of his choice so I could get to grips with the popular form. He volunteered to post me some well-known examples.
At first, I was sceptical. Knowing a smidegeon about the Japanese take on comics from related media like video games (and the mischievous disposition of my friend) I braced myself for an unholy torrent of tentacle porn and schoolgirls of dubious age to land on my doormat.

Thankfully, for now at least, he was able to forebear from mailing anything that might get me put on a list. Instead, he chose the first volume of ‘Attack on Titan’ which I have been informed is jolly popular at the moment. It boasted on the cover that one critic dubbed it the Japanese equivalent of The Walking Dead. High praise indeed – and a good choice of pull out quote. It had me intrigued.
Although that comparison had piqued my interest, the other side of the cover rather put me off. It depicts a Titan – the titular man-eating giants of the series – facing off with one of the soldiers trained to fight them. A side note: I’m not entirely sure why the series is called Attack on Titan. In the narrative, the Titans are a whole species, so shouldn’t it be called Attack on The Titans?

The Titan looks pretty disgusting; a huge, flayed, humanoid head, bright red musculature displayed. It looked a bit like Gunther Von Hagens managed to get hold of Vin Diesel’s corpse. These monsters are deliberately ugly and horrific, but the cover also gives the impression that the story will be more bizarre than it is. In truth, Attack on Titan asks you to buy in to a few strange concepts but then follows through with them in a consistent and detailed way.

The opening pages left me more confused. I fell into the trap of reading the book the wrong way round – although I was aware that Manga is read right-to-left, I hadn’t realised that the whole order of the pages would be reversed. The western publisher had thoughtfully put a page at the back headed ‘STOP!’ explaining this difference, and I was soon back on track.
I was impressed by the opening sentence on the first page; ‘That day, the human race remembered… the terror of being dominated by them… and the shame of being held captive in a birdcage’ which gives a memorable precis of the whole narrative.

Attack on Titan then begins in earnest with a battle scene. A group of soldiers ride on horseback through a wood, ready to attack a Titan. When the attack begins, I was a bit disoriented. The artwork is very expressive and fluid in this sequence, at pains to evoke motion with long, quick pen strokes and ‘movement lines’. Although it was quite striking, I had problems following the spatial logic of the scene, rather like a battle scene in a film composed entirely of fast cuts. It doesn’t help that the series’ signature weapons are introduced here, and although they are later explained in detail, the outlandish nature of the gear added to my early disorientation. This equipment consists of a pair of grappling hooks on wires fired from a rig around the waist, with a motor unit perched to the character’s rear. This allows the fighters to zip between buildings, and around the Titans, Spiderman-style; or to ‘switch to vertical manoeuvring’ as they call it. The characters wield blades, individually or as a pair, which are used to slash at the Titan and attached by wires to the rest of the assemblage. This is all quite complex, so although I wanted to read on, I didn’t really know what was going on during this sequence.

Our focus then switches to another location. A young boy is awoken from a dream in a field by his sister, and they walk home through the last remaining human enclave. The rest of the volume follows the siblings as they grow up and enlist in the royal army who are desperately resisting the Titans. Their story starts in a time of relative peace, with the remaining humans hiding from the marauding Titans behind a series of huge concentric walls, protecting their sphere of influence. Naturally, this doesn’t last for long and soon the threat becomes grave, spurred by the arrival of a new, much larger Titan.
A double page spread is devoted to our first real look at one of the towns. In contrast to the loose strokes of the fight scene and the exaggerated, wide-eyed character designs, the penmanship in this drawing is very neat and precise. Buildings in Attack on Titan are drawn almost like architectural sketches, rigid and ordered. The style of the town evokes pre-industrialised Europe more than anything Japanese, with a slightly Germanic flavour. The closest comparisons I’ve encountered are with Japanese games that draw from this type of neat, idealised European iconography like the WWII inspired Valkyria Chronicles or the Professor Layton series. Although the story is supposedly set in the future, the mixture of Napoleonic-era technology with imaginative sci-fi and fantasy elements really appealed to me.

Some elements of the story I did find a little jarring. The female lead is supposed to be extremely physically strong and competent, but early in the story she throws her brother at a wall over her head to calm him down. This was an odd moment, because most of Attack on Titan, although fantastical, obeys fairly normal rules of physics; for example, the chilling scenes of Titans plucking helpless humans from the ground and devouring them are gruesomely plausible. Because this act was so exaggerated, I thought for a time that the girl possessed actual superpowers – however I’m starting to get the impression that even semi-naturalistic Manga can bend the rules a lot for the characters to express extreme emotions.

I also found some of the spoken exposition clunky. For example, one character says to a close friend ‘yeah, I know… I’m weaker than the average person… and it was a miracle that I passed the simulated combat graduation test’ and I am forced to ask; is he speaking for his friend’s benefit, or only for the readers? Perhaps the translation is awkward, or maybe this is a common convention in Manga the same way as soliloquy is in Elizabethan drama or voice over is in film noir.
As a ‘Manga Virgin’® these characteristics popped out, pulling me away from the narrative, which I otherwise enjoyed immensely. As part of an ongoing series, the first volume sets up plenty of interesting characters and unresolved plot points, while slowly pulling back the veil on the lore with diagram/information pages entitled ‘Current Publically Available Information’. Minor spoiler alert! – Attack on Titan also does some surprising things with character death in a style Game of Thrones fans will appreciate.

I was expecting my first foray into Manga to be confusing and alien and this article to be ripe with comic potential. In reality, I was on broadly familiarly ground and was impressed with the imaginative art and storytelling in Attack on Titan. I’ll definitely be reading some more of the series, and I’m looking forward to my next Manga challenge…