The calm before the storm: quieter moments in gaming
Advertisement

Well…it’s post E3 and after the excitement of the sheer number of jaw dropping announcements made at the expo, we slowly slip into that high summer period where the big triple A releases somewhat dry up and the outside looks just a little more tempting.

As we’re all busy polishing off our back catalogues (Witcher 3 for most I’m betting) and waiting for an autumn full of Metal Gear Solid 5 and Star Wars: Battlefront to name a few of the upcoming drool-inducing titles, I’d thought i’d take the inspiration the real life lull affords and write about some of the most understated moments in gaming that when pulled off properly, really add something special to the medium.

Games are, in large: brash, loud, adrenaline-fuelled affairs that offer little respite. Whether you’re driving, shooting, playing a sport or hacking your way through enemies, there’s usually very little let up outside of the menu screen. However, the very best games, and usually the games with the most engrossing stories offer something more. They give us little moments of peace within the chaos, moments of ‘calm before the storm’ where the game forces you to take a breath and offers you something unique and peaceful to do, taking you away from the action and allowing you to appreciate the world you find yourself in.

Sadly speaking, moments like these are few and far between which really highlights that quality storytelling is still a rare thing in games, something that the industry as a whole needs to address.

But that aside, lets take a second ourselves to appreciate some truly great examples of the quieter moments in gaming: 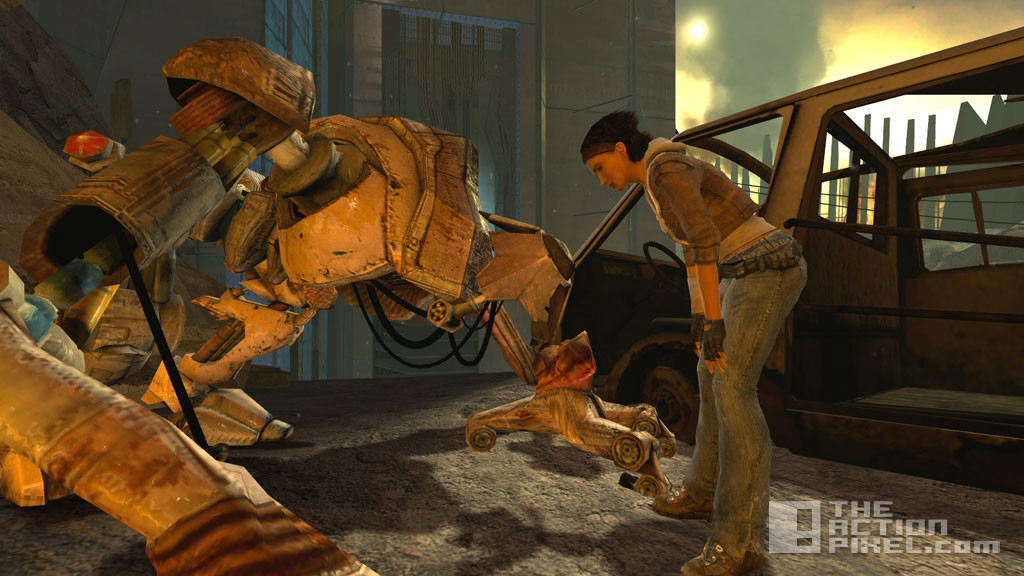 One of the finest games of a generation, Half-Life 2 lives fondly in the memories of many a gamer all of whom still hold out hope for Half-Life 3. The storytelling in the series has always been exceptional with emotional peaks and troughs throughout, and brave decisions to take the action away from the player for extended stretches. But of all these great moments where you can step back and properly appreciate the doomed world you’re exploring, the highlight for me is playing fetch with a giant mechanical dog in Half-Life 2.

You’ve just escaped hordes of aliens, fighting for your life every step of the way  to escape an occupied city and reach your underground compatriots. It’s been a thrilling, tense and action packed chase so a moment of respite is welcome. Your allies hand you a tasty new weapon in the form of a gravity gun and in a cleverly set up tutorial you test out your new toy by playing fetch with ‘Dog’ a big ol’ lovable robot who loyally fetches the objects you fire across the scrapyard.

Stripped down, the scene is just a way to introduce you to a complicated game mechanic, but it’s done in such a charming way. You’re doing something so human as playing fetch in spite of the alien occupation and that reminds you what you’re supposed to be fighting for. A stunning moment of story-telling. 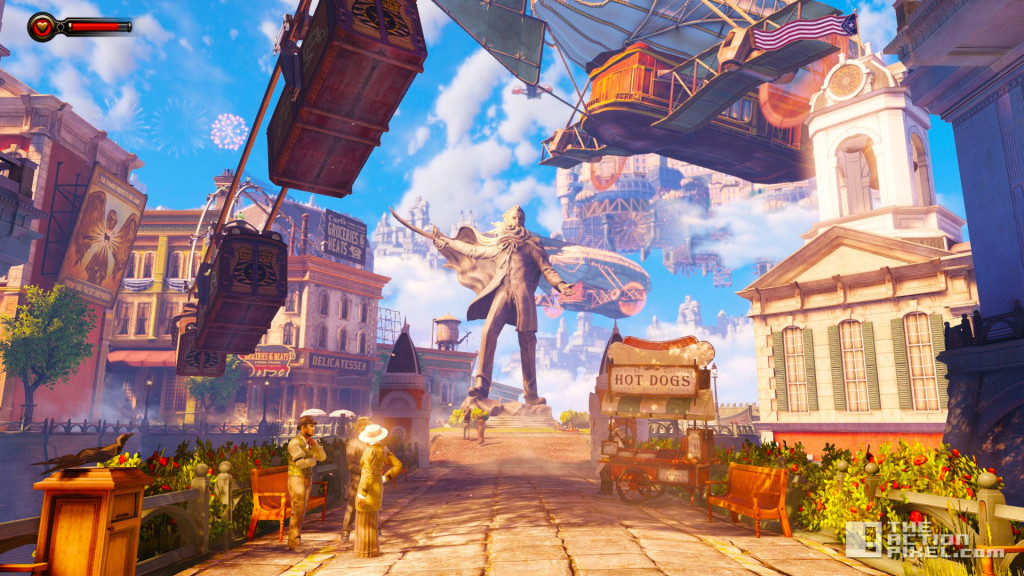 Sure, Bioshock: Infinite may not be as good as its much lauded predecessor but the things it did right it did very right indeed. The floating city of Columbia was just as magnificently realised as Rapture and was a pleasure to explore. The only real shame about the game was that you didn’t get all that much time to actually have a thorough look around. The moment that stands out in my mind is a very subtle moment of storytelling where the game dials back the relentless action to allow you to take stock of your situation. The first act of the game tasks protagonist Booker DeWitt to find the imprisoned Elizabeth and rescue her from her confines in Columbia. After finding her locked in a tower and rescuing her from a psychotic giant mechanical bird, you’re suddenly thrown into another part of the floating city and given a moment to catch your breath, appreciate the fact you have a new companion to traverse the rest of the story with and have a rare moment to actually explore some of Columbia without having to worry about being attacked. The design in this game and the relationship between Booker and Elizabeth are two of the absolute highlights so to be given this quiet moment is very much appreciated.

3. Dropping into the codec in Metal Gear Solid 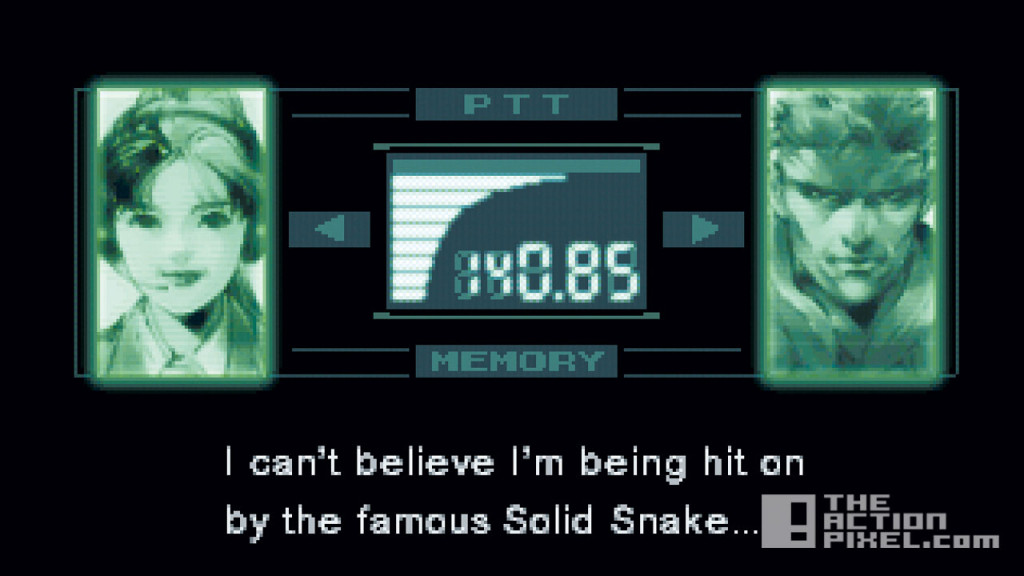 Another generation defining title (sensing a theme here) the third core game in the metal gear series was jammed packed with atmosphere and tension. As a lone soldier infiltrating a snow enveloped island under the control of terrorists, the feelings of dread and loneliness follow you throughout the story, but legendary game creator Hideo Kojima finds a unique way to offer players moments of calm. At any point in the game you can dive into your communication device, the codec, and chat to any one of a half dozen support operatives back at home base who sit ready to offer encouragement and advise. These little conversations would range from tactical information about the mission to development of characters’ backstories, to funny asides and general chit-chat. The codec offered a connection back to the real world away from the tension of the mission and still remains one of my favourite devices in gaming.

4. Giraffes in The Last of Us 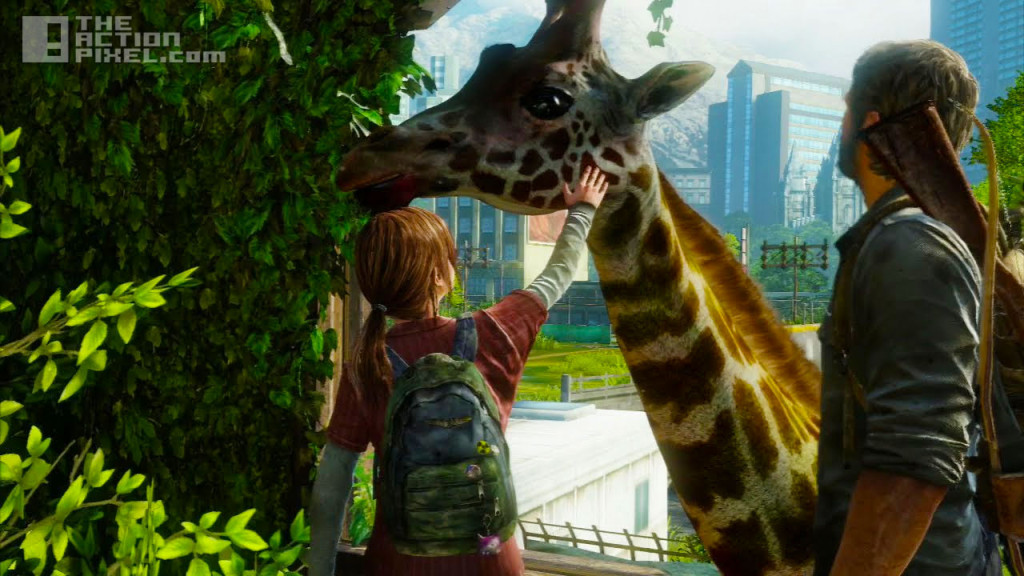 Quite possibly my favourite scene in gaming, the cinematic experience of The Last of Us really outdid itself with this quiet, peaceful break from the relentless horror. The grizzled Joel traverses the ruined world with innocent Ellie, teaching her life skills as they go in a quasi father/daughter relationship, but from the moment the game starts, the player is inundated with trauma as each scene builds to horrendous climaxes as befitting the best stories in zombie fiction.

Missions fail, friends die and the main characters’ spirits are slowly broken as the story unfolds. Towards the end of the game, as Joel and Ellie near the end of their search for the ‘Fireflies’ who may hold the key to saving humanity, after all the trials they’ve been through one beautiful event punctuates their loving relationship. Walking through an abandoned complex, Ellie spots a herd of giraffe through a window and runs to an open air balcony to gawk at the majestic creatures. Joel hurries up beside her and encourages her to pet one of the animals as it reaches its curious head towards the pair. It’s a typical, touching scene in a father/daughter story made all the more moving by the horrors that Ellie and Joel had to survive to get there. You can linger with the giraffes as long as you like before walking through a door to the left of the balcony and proceeding with the devastating finale of the game. I bet a lot of gamers stayed with those giraffes a little longer than they should have. 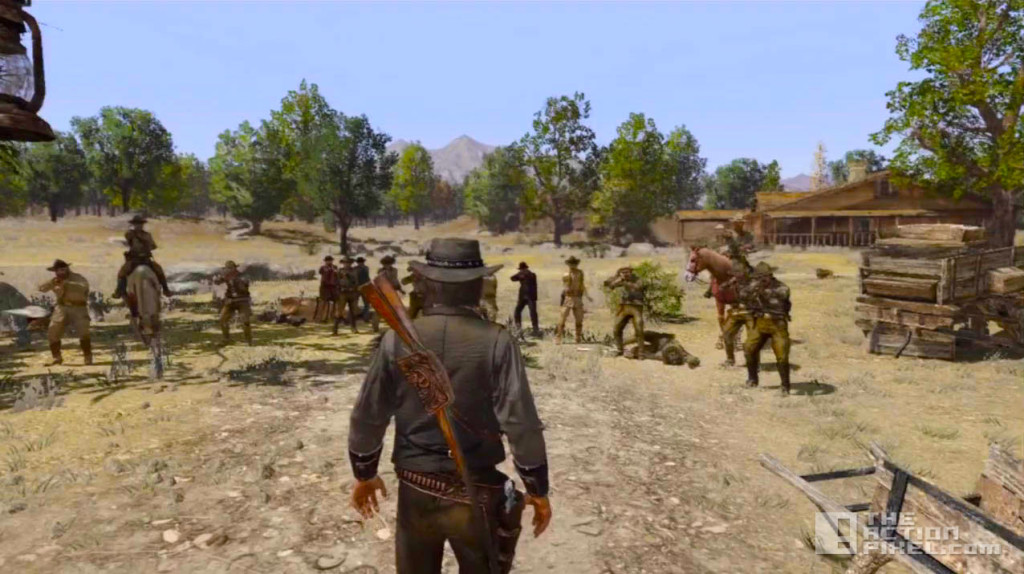 The standard of quality with Rockstar games is second to none and that goes to all aspects of their products: from the worlds they realise to the stories they tell. Whether your talking about Bully, Grand Theft Auto or Red Dead, you can get lost in a Rockstar world with ease. The devs’ greatest moment of story telling however came with the final act of wild west adventure Red Dead Redemption.

After sinking dozens of hours into the game where you make a wagon load of enemies in an attempt to rescue your family, you spend the final act of the settling into the life of a rancher with your wife and son; the hard nosed life of a cowboy seemingly behind you. You spend several hours worth of missions on fetch quests and the like simply building up your ranch and spending time with your family, it’s all quite…pleasant. This all abruptly ends when the enemies you’ve made throughout the game come to find you and in a shocking twist they gun you down as you walk out of your barn. This harrowing climax is made all the more shocking by the quiet hours you spend with your family beforehand and is a masterstroke in how to deliver a final punch in a story. Bravo Rockstar. Bravo.

Warcraft: Skies Of Azeroth gives us 360 view of a vast world