We all have a dark side. Sure. It’s what makes for great character depth and narratives. It’s the side of our human nature that craves blood and gore, the danger and ugliness. But, for most of us anyway, those social cues we learnt from childhood keeps those ugly little qualities in check. This ‘balance’ is what keeps our worlds sane. Hell, we all can’t be rebels and anarchists.

But for some of us, the balance on the scale of our two-selves can tip to the side of chaos, and all those qualities we usually keep cornered off become unhinged and unleash a brutality and maliciousness, leaving nothing but destruction and ruin in its wake. Freud called it our Thanatos, the “anti-libido”. The Yin and Yang. The eternal conflict between our “light” selves and our dark selves. And when our #TAP10 list of comic book characters become victim to their “dark” selves, the world trembles at how someone so ‘normal’ could be lost to a darkness that consumes wholly and without quelling.

10.) CHRISTOPHER SUMMERS and the BROOD

Christopher Summers, also known as Corsair, is Scott Summers (Cyclops) papi. He and merry band of thieves committed piracy amongst the stars as the Starjammers, robbing any Shi’ar vessel they came across. A fierce and respected leader, Corsairfell from grace when he became infected by the Brood, a race of extraterrestrial insectoids that ended up transforming Summers into one of them. He had it under control for a while, but lost control numerous times, infecting others with his Brood baby eggs and killing many the process. He even attacked his sons Cyclops and Alex, which is kinda messed up especially seeing he wasn’t present for any of their birthdays. In the end he regained control of his dark side long enough to ask his Cyclops to kill him. What a cruel parting gift, you deadbeat schmuck of dad.

Calvin Zabo was by no means a ‘good’ guy but he was a brilliant medical scientist with a penchant for the field of hormones and human biology. He soon became obsessed with harnessing the totality of his primal bestial form. That and the Robert Stevenson’s 1886 classic, Strange Case of Dr Jekyll and Mr Hyde. So with a bit of scientific tinkering, funding his research through criminality and such, Dr. Zabo developed a formula that turned him into a hulk-like rage which he affectionately dubbed “Mr. Hyde”. With every transformation, Mr. Hyde seemed to be hell bent on revenge, and he’s petty enough and strong enough to do it. Seeing he can tear through steel as if it were wet cardboard. Bad combo.

Jason Blood lived in the time of King Authur of Camelot and served as a Knight in his court. Merlin apparently wasn’t happy with King Authur’s knights as the only means of defence, or the fact Blood betrayed Camelot to her enemies for the woman he loved. So the wizard conjured up a demon by the name of Etrigan. But when Merlin saw Camelot would fall regardless of his efforts decided to imprison the demon in Jason Blood until it was summoned. Right. So, Merlin is a douche. And with the special incantation quote above, when spoken, Jason Blood alter takes over, the demon, with sanguine eyes, gold yellow skin, horns, spock-ears. He can also breathe fire, and then there is the whole “only-being-able-to-speak-in-rhyme” thing when he is in demon form. Being bonded with the hellish creature means Jason Blood is immortal, and though he uses the dark power to combat evil, Jason Blood still desires to be released from its dark grip.

Johnny Blaze was a cool stunt motorcyclist who decided it was a sound idea to make a pact with Devil (who turned out to be Mephisto) to save his ailing father. As a result whenever the sun goes down and when surrounded by evil, Johnny Blaze becomes consumed by hellfire, transforming him into Ghost Rider. His head pretty much turns into a flaming skull riding a bad ass motorcycle. This transformation is a result of being bonded with a demon called Zarathos, who has the tendency to devour souls.

As Ghost Rider, this supernatural vigilant goes rampaging through the city staring down evildoers with his “Penance Stare” a little technique thats paramount to amplifying one’s soul-crushing, agonising guilt a billion-fold and make you wet your pants accordingly. A good guy, that Johnny Blaze, but as time progressed, Zarathos gained more control over the Ghost Rider entity and became more and more violent.

Eddie Brock was a good journalist. But one article would be his undoing. Brock was writing an expose on a serial killer called Sin-Eater, who he believed as Emil Gregg, except Spider-Man caught the real killer. Disgraced, he loses his job and his wife. His hatred for Spider-Man thus blossoms and his revenge fantasy soon become a possibility with the with the Symbiote. The Symbiote is an alien parasite that tends to draw power from the negative energies of the host its attached to. It nearly took hold of Spider-Man until he forcibly separated himself from the Symbiote. But when Brock comes in contact with the Symbiote, he metamorphoses into a hideous, jagged-teeth monstrosity known as Venom. The host and parasite, bound together to seek revenge on their mutual enemy, drawing on dark negative impulses, transforming himself into Venom on the wings of a whim.

Jean Grey has been one of the first members of the X-Men and is one of the most level headed telepaths and telekinetic mutants. He could even give Professor Xavier a run for his money. But a girl like that, a leader of sorts to the other X-Men, being so level-headed, you’d think she would be one of the last people to lose it.

The Dark Phoenix Saga will have you thinking otherwise.

In an effort to save her team dying, whilst piloting a shuttle back to earth, she dug down real deep and unearthed a tremendous power so great it transformed her very costume and gave her god-like powers and enveloped her with the fiery power of the Phoenix. And like all god-like powers, it soon started to take total corrupting control of her, to the point she became a loose canon where she lashed out at everyone, whether they were enemies vying for control of her mind or her X-Men team.

What do you get when you infuse Conan the Barbarian with some Celtic mythology? A crazy, blood-and-woman lusting savage known as the bad-ass Sláine. He’s probably only loyal to the Earth Goddess, and has been destined to rule as High King of Ireland. He’s a formidable fighter typically seen towering on the battlefield swinging his quaint “Brainbiter”, an axe so huge and broad that it would make Thor’s Hammer blush.

Now that you’ve met Sláine, there’s another side you should get familiar with. It comes on when he’s surrounded by one too many enemies who wish to kill him. So, when the going gets tough, Sláine gets…well, spastic. And instantaneous grows tumor-like muscles. A cross between the Hulk and the deformed soldier from Frank Miller’s 300.

The “Warp Spasm” they call it, a frenzied battle state that warps the human body into a grotesque powerhouse of blood, muscle and rage. You’d think he somehow took a thousand super steroid injections all at once, but no. His “Warp Spasm” is based on the ríastrad of the Irish mythical hero Cú Chulainn. Just rest assured you don’t want to be anywhere in arms length when he gets into his ‘frenzied’ state.

Known to a few as Logan, and to many as The Wolverine, he is one of the oldest members of the X-Men team. Literally, dude’s born somewhere between 1886 and 1897 in Canada. And after suffering experimentation that grafted the near-indestructible Adamantium metal to his skeleton, and suffering amnesia, Wolverine’s mental state has gone through the proverbial sieve one too many times. He’s rough around the edges to say the least, but when he gets set off into a primal, animalistic rage, very little can call him back from the primordial edge.

The same thing that makes him such an asset to the team, i.e his animal instinct, fast-healing ability and those sharp near indestructible claws, is the same qualities that make him potentially a danger to anyone who gets in his way. Even his fellow X-Men. Because when his rage and sanguineous nature go unchecked, it pretty much spells disaster for everyone involved. But with a personal shrink by the ready in the form of Professor Xavier, he should not be that much of a liability… right?

Can we trust him. Yes. Once upon a time. Harvey Dent was young District Attorney, a man destined for great things, making his career by ousting the organised criminal element out of Gotham’s street. However, during a prosecution case of a mob boss, Harvey gets acid thrown in his face, permanently disfiguring the left side of his face. The trauma of the attack sends Dent into deep psychosis, exhibiting signs of multiple personality disorder, schizophrenia, OCD and bipolar disorder. The Dent the world knew, the man and friend Bruce Wayne knew, continually recedes to the dark criminal element of Harvey’s psyche.

A true tragic creature, victim of circumstance. A renowned scientist, Bruce Banner, risks his own life saving Rick Jones. But Banner’s altruistic actions were at his own peril; Banner absorbs tonnes of gamma radiation from the detonation testing of a WMD. It should have killed him. Instead what the accident wrought was much worse. When heightened to anger, Banner’s evolves. Into a evergreen muscle bound, vessel of pure, unbridled, inhuman rage known as the Hulk. An unstoppable freight train with an insatiable appetite for destruction. And sure he has a huge anger management problem. But did you ever think the big jolly mean giant just wanted to be left alone?

We are never ourselves. The front we general put on for the world acts as a cage for a more primal, uglier version of ourselves. This is even truer for our comic heroes and villains. Some find balance, others lose themselves fully to the Thanatos, but the struggle is a constant one. This classic dichotomy of the human condition is an enigma we have all struggled to come to grips with. And it was that classic Scottish novel by Robert Stevenson that best symbolically immortalised the quintessential map of the human psyche. The comic book has been key in exploring these themes and has given us both entertainment and thoughtful, creative insight into trying to understand the complex human state. 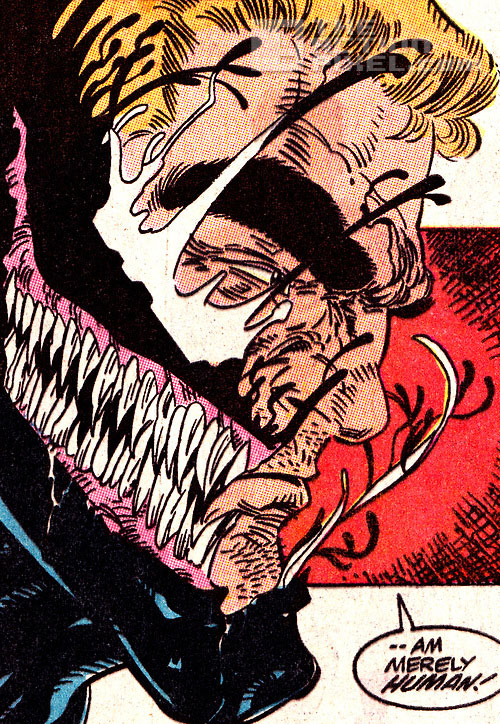 Marvel’s Universe returns to Genesis with Vision in Uncanny Avengers