The proverb “behind every fortune is a crime” is a severe understatement when it comes to these corporation baddies, and they are usually the evil gooey centre in grand global scheme of the corruption-and-conspiracy candy. Wow. Lots of consonance in this post.

So if you are a looking to start on the bottom rung of the corporate ladder of evil, here’s a few companies you would probably want to forward your evil resumé to:

Simon Stagg is the kind of family man you’d like. He owns Stagg Enterprises, with business spanning New York, Metropolis and LA, with an HQ located in Gotham City. All good stuff, except he has the tendency to steal scientists’ lifelong work and turn it into a million dollar industry. You may have caught him on The Flash live-action series.

One such shady dealings was with employee Rex Mason, who worked for Stagg while dating Stagg’s daughter. That was enough for Stagg to have Mason neutralised and under his orders, Stagg’s neanderthaloid bodyguard Java knocked Rex on his ass, exposing Rex to a sudden burst of radiation from an ancient Egyptian artefact, transforming Rex into Metamorpho, the Element Man. Stagg later went on to manipulate Metamorpho’s ability to his own ends, eliminating corporate rivals and gaining the upper-hand.

Despite rising to prevalence as the world’s numero uno weapon’s dealer when Tony Stark came out of the gun running game, it was never enough for Justin Hammer to be a billionaire weapons dealer. He had to discredit Tony Stark, the Iron Man, and his company Stark Enterprises at every turn. Which meant teaming up with psycho-mutant terrorists, corrupt generals and some other unsavoury business associates and practises.

Even in Justin’s death, the bad seed of corruption stayed fruitful with his daughter and granddaughter Justine Hammer and Sasha decided to run the company into new depths of corruption, aligning themselves with politicians, corrupt government officials and techno-terrorists like Spymaster and Ezekial Stain, the guy Sasha’s giving the goods up to. All very complex relationships. And following in family tradition, they go out of their way to discredit Tony Stark’s efforts in every way possible, not seeing themselves above corporate espionage and criminal sabotage. That’s a wee bit obsessive, don’t you think?

For the “smartest man in the world”, he surely has an old way of running a corrupt organisation. Empty shell corporations where money is moved from one dummy account to the next. Fantastic.

So Adrian Veidt, aka the superhero turned multi-million dollar mogul, has made a fortune selling his “Ozymandias” brand to the world. Toys, perfume, future technologies and industries are a few things he dabbles in. Oh, there is also investing in genetic sciences, creating alien creatures with psionic abilities that could level cities, killing millions to dupe the world into believing it was under attack by extra-terrestrials… all in the name of ‘world peace’. It’s what one would expect from a hyper-rich deluded sociopath.

Larry Trask is a mutant. Precognitive clairvoyance… basically he could see into the future. This gift however was overshadowed by a white hot internal hate, and he would later on go to form the infamous Trask Industries, the company responsible for forming the Sentinel program. Quite Nazi if you ask us. It involved creating gargantuan robots tasked with capturing, cataloguing and destroying all mutants. And funded by the government, Trask’s hate-fuelled mutant control program eventually became his demise, not before effectively deteriorating further the relationship between humans and mutants.

They always come across as that future company invested in exploring new worlds and delivering the truth of human existence it feels exists in the cosmos. And sure, by golly the find it. And it is… the perfect creature. To be precise, a super intelligent monstrosity with the exoskeleton and acid blood that soon tears through the crew of researchers and explorers. The comic series on Dark Horse explores the aftermath of Ripley and the crews encounter of the Xenomorphs. Despite knowing the destructive power of the Alien, Weyland doesn’t see much of an issue acquiring an alien queen and harvesting her eggs to create an army of Xenomorphs. They eventually get loose and infest the entire earth. Fantastic.

Policing and security are chief concerns in any dystopian future. And OCP / Omni Corp Products, later known as OmniCorp, is there for all your security needs. OCP’s answer to our security needs? Populating the police force with robots and other ‘crowd management tools’, like the ED-209. Basically a cold, killing-machine with two miniguns for arms. The one good thing they made was Robocop, grafting together the cold, calculative precision of a machine with a somewhat diminished, but present human element of compassion found in severely-injured cop Alex Murphy. This is done with a few failsafes (of course) that ensure no member of the OCP board could be arrested or harmed by their ‘appliances’, no matter how corrupt and criminal they were found to be. I call impropriety on that one.

Scientist and Business Tycoon Norman Osborn has made his fortune and resulting Oscorp Industries from creating scientific breakthroughs. Surprising however how he’s managed to keep afloat with all the mishaps.

He built the corporation mostly on the genius and research of mentor Mendel Stromm. Osborn even went further to use Stromm ‘super strength’ research to transform himself in the the super-villain Green Goblin. That was only after Osborn got Stromm arrested for embezzlement.

Spiderman over the years has had his work cut out for him battling the evil power-hungry green hang-glider. Even in the future, Oscorp is still a problem in the Marvel Universe, joining forces with Allan Chemical to create Alchemax in the year 2099, ruling pretty much every aspect of people’s daily lives.

Lex Luthor is the type of guy who will make a whack load of dineros from his multi-billion dollar corporation between the time he wakes up and the time he drinks his first cup of jo’. He pretty much owns Metropolis, the amount of times he has rebuilt the city after some alien invasion, or some Superman / enemy face-off that levels half the city.

With all LexCorp’s subsidiaries bringing in the money, Lex has more than enough money to splash, funnelling a lot of the accumulated resources into criminal and shady covert organisations. Whether cloning, creating bio/chemical/mechanical weapons or taking part in a specific branch of mineralogy (of the space green rock kind), all in the name of power and destroying Metropolis’ number 1 boy-scout hero Superman.

LexCorp may have gone the way of Lehman Brothers, assets being liquidated and bought off largely by Wayne Enterprises after Infamous Crisis‘ narrative arc, but LexCorp is certainly the corporation that knew how to look legit to the ‘sheeple’ of the world while using their legal dirty money to fund a vast criminal and black government enterprises like Project Cadmus.

On the surface, armed with a sexy corporate logo, making beauty products and the likes for desperate old ladies trying to hold on to their you. The even tweak around with your food.

The biogenetic pharmaceutical company wants you to look and feel young. Also, well, they are heavily invested in viral weaponry programs, clandestine projects involving bio-genetic engineering for military and defence programs. Hell, they even have their own paramilitary operatives that act on the company’s behalf. A gun-totting henchman won’t do for a company entrenched in this much dirt.

In Umbrella Corporation’s search for immortality, the dream of every psychopath, the Umbrella Corp created the T-virus. Real sexy special too. But it has the knack for killing those infected, also something about zombifying people, brain and flesh eating, worldwide epidemic…. yeah.
And even with the Racoon City incident where the containment of the disease cost the lives of a whole city, it doesn’t stop Umbrella trying to control and pander the T-Virus for militaristic purposes. Way to go Umbrella!

This is the company to inspire all far-reaching global companies. Pretty much like Unilever and Procter and Gamble, they exist and span the entire Looney Toon’s universe. It’s the go-to company for Wile E. Coyote. All inferior products mind you. Like a 3rd world labour camp crafted sport shoe. But it doesn’t change the fact Acme is a well known brand.

So what do they make? Everything. Anvils, elaborate IKEA-esque bird and animal traps, to disintegrating gun ray, there is nothing you can’t get at Acme. No matter how faulty the product, they’ll still find away to sell it to you. Now that’s some corporate greed for you. Earthquake pills anyone? 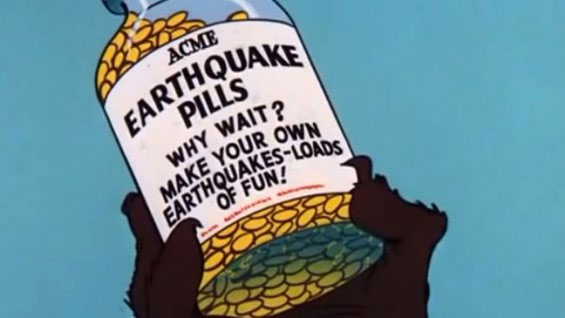 The 1% care little for you, if at all. And many of the companies listed here tend to be seen as exaggerated representations of what people think an multi-million dollar organisation is like. But here’s the kicker, since 2008, the level of Wall Street companies entrenched in corruption isn’t any better than many companies mentioned here. All we need now is some superheroes willing to break the cycle. Or at least punch some CEO’s in the nuts.
Related Topics:acmedc comicsevil corporationhammer industrieslexcorplooney toonsomnicorposcorp industriesresident evilstagg industriestrask industriesumbrella corporationveidt enterpriseswildstorm
Up Next