Atmosphere is the main ingredient in any great film, particularly horror. The use of sound and light, or lack thereof, all play an integral role in eliciting a certain psychological response from viewers. Animes tend to understand this very well, so much so it has established its own brand of ‘communicative tools’ congenital to the artform. Like showing a ‘spark’ accompanied by a form of a chime that connotes a character’s heightened state of awareness. 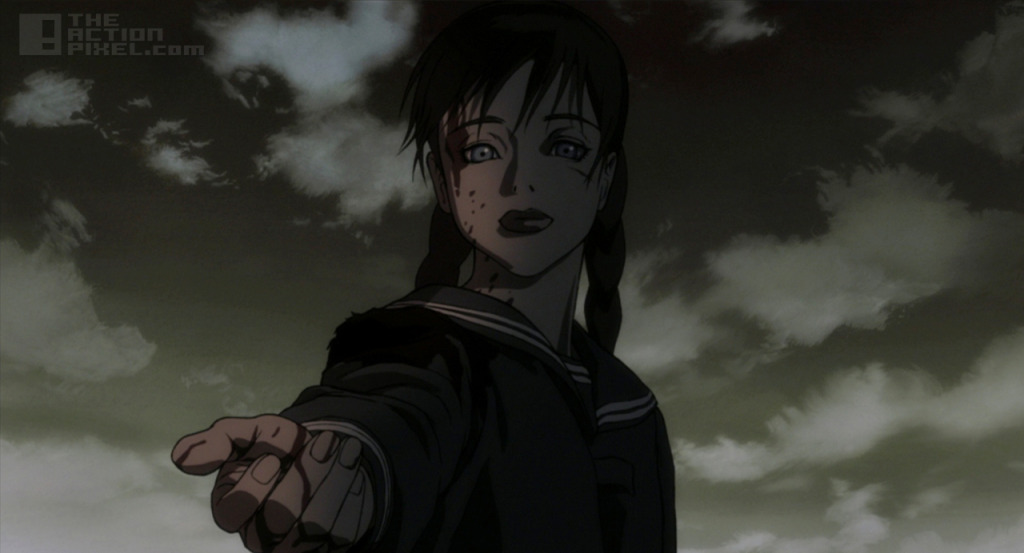 Blood: The Last Vampire is about the last known true vampire out for blood, hunting shapeshifting bat-like creatures called chiropterans. Her handlers put her undercover as a school girl near the American Yokota Air Base as the Vietnam War rages on. 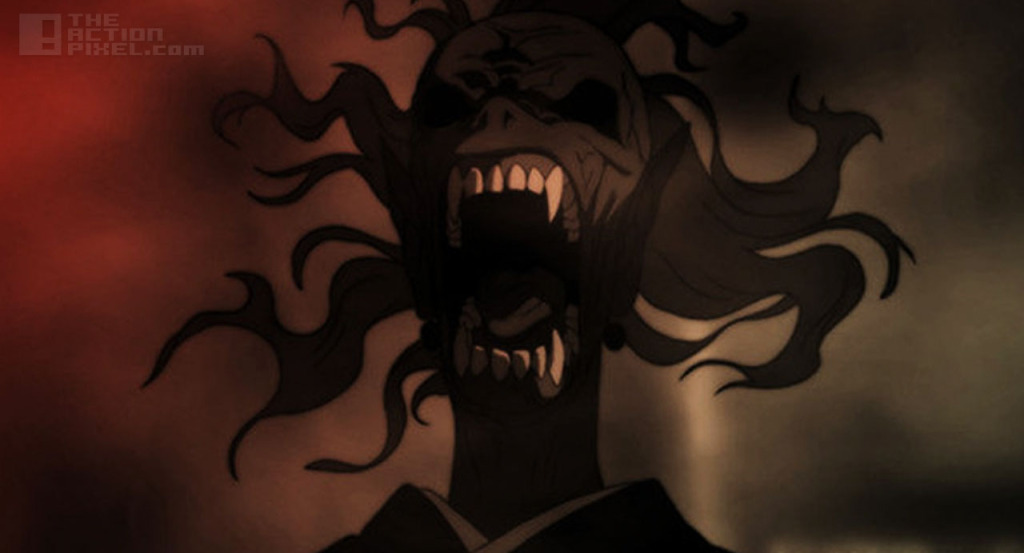 It’s 1966. Chiropterans are feeding on human blood and hiding amongst the populace. The school’s holding a halloween gala. Saya (who is older than your mother’s and grandmother’s age added together) is forced to wear a school uniform. All ingredients for a fucked-up recipe of blood letting. 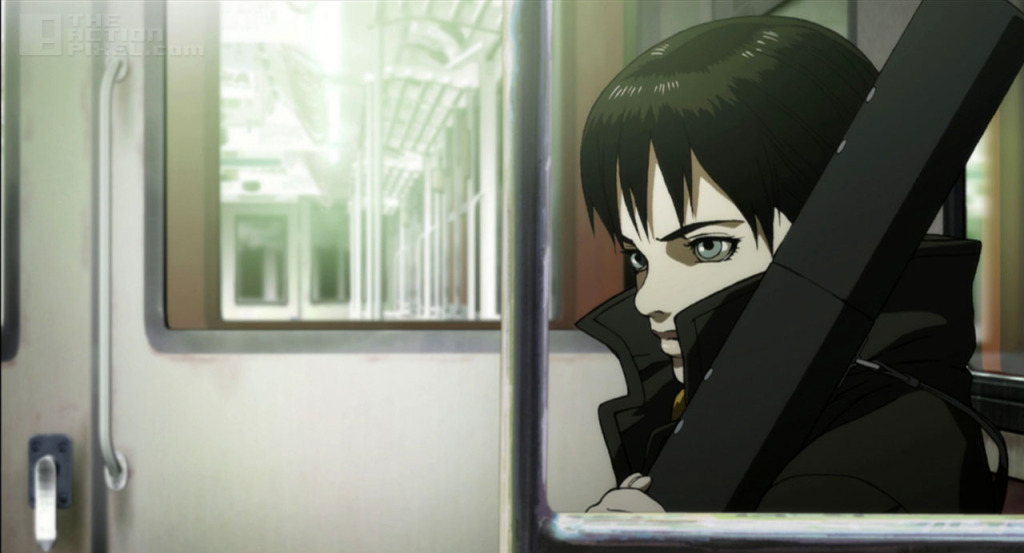 Blood‘s “point-of-sale” scene, the iconic go-to scenario that makes it in the anime, manga and the later Blood anime series Blood-C: The Last Dark, is the subway car scene. The near flawless merger of 2D and 3D constructs in Blood: The Last Vampire is only outdone by the sense of impending dread that intensifies, particularly the beginning train sequence, with every click and clank of the train tunnelling through the underground crescendoing into pure bloodlust. The lighting and attention to detail when the lights go out in the subway car, as Saya draws her sword to slay her quarry, makes it one of the more beautifully-orchestrated scenes throughout the entire film.

How this scene differentiates from a similar scene in Blood-C: The Last Dark is that in the latter, the train scene was crowded; the small tight spaces with panicking travellers added to a claustrophobic tension and fear that dominoes throughout the remaining carts as they run to escape from a vampiric monster. Blood: The Last Vampire, however, does well to create, in the classical sense, a decisive dynamic that builds tension slowly and steeply to near immediate explosive action. Saya is made to look like an innocent girl on a train alone with a shady-looking traveler. But she is far from prey.

There are small motion tracking issues I feel that could have been done slightly better, but technically-speaking the animation and framing of scenes leant itself beautifully to the overall psychological imprint of the film.

Re: character design, I feel Saya was the only one that was thoroughly explored, and of course we could get into this anime’s portrayal of black people but thats a whole other post in itself. 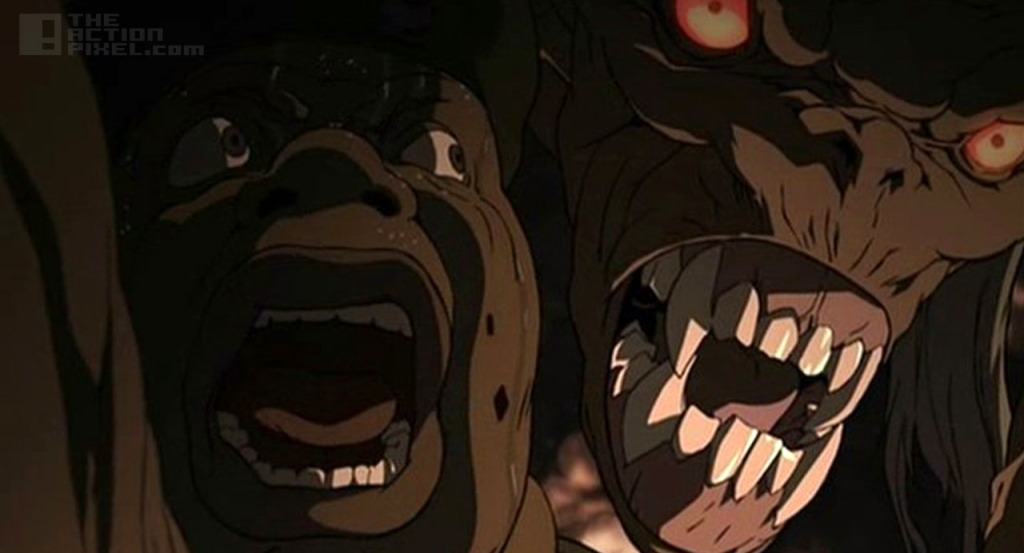 With that said, what made Blood: The Last Vampire great was the psychological element and its exploration on screen is something I think was forsaken somewhat with the Blood-C: The Last Dark series. Scenes in the train, or when the mild-mannered nurse comes face-to-face with a Chiropteran at the school dance, the crimson read, ‘onion-layering’ of frames brings an old-school horror vibe to that particular scene. And who could forget that defiant scream Saya gives for her sword… all makes view good viewing.

Blood: The Last Vampire, in a cinematic and atmospheric scope, was a great anime that did good to merge striking visual psychosexual elements to create an audiovisual piece. 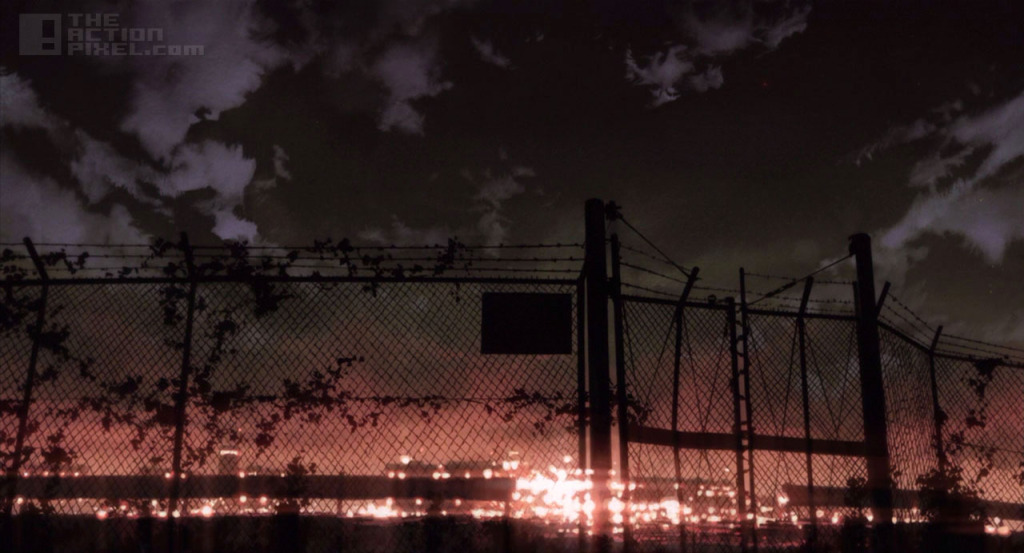 The political aspect, have the Vietnam War / American military occupation in the background was an under-cursor, and did not impact the way I think was intended, which sadly made it feel like it was a ‘oh, by the way’ addition to the narrative than an actual driving mechanism in the story of Saya’s latest mission or her aim to discover her dark past.

In the end, Blood: The Last Vampire did well to keep true to the manga, as well as peak interest in new fans. The live action film however, that bares the same name, needs to be shot and buried under a rock, as I am not sure who gave the thumbs up for that to be made. Come on the monster transformation happened in a visually disturbing tornado of light. Really?! But in any case we think Saya could give the likes of Blade a run for his money.