The Savage Sword Of Conan
Advertisement

The Savage Sword Of Conan

I have a plastic bag. Which isn’t a unique thing. Surely. But the contents therein is something to goggle at. Stacks of comic books that hold with it more than printed word and image, but memories of a childhood gone. The Savage Sword of Conan Magazines. A small but glorious bounty.

What was once clothed in colourful, fantasy-art covers have since then rescinded into distant cell cemeteries of the brain. Old, musty, yellowing pages bare witness to narratives with truncated  beginnings and ends. Narratives speaking tales of old; a Neanderthaloid savage who spoke eloquent English. The phallic sword always extended, Conan walked the lands a king, a thief, a vagrant, but never a slave. This long-haired, bronze-framed devil had a hate of dark-skinned people, magic and religion, although occasionally harshly offering one-clause prayers to his indifferent god called Crom. Scores of scantily clad women whose whoas could be quelled by a firm smack to the face, or some hardcore lovemaking. Liquor, money, sex, murder. It was all there in my hands. Before rap. Before the psycho-sexual violent imagery of heavy metal. Before the Hollywood Action movie, Anglo-hegemonic dribble. Conan was giving me a raw version of what a man should be. To hell with the Comic Code Authority.

In retrospect, it was a good thing I wasn’t the most impressionable child, but even ’til this day, I have always been compelled by the lithe-inked simulacrum adorning the page spreads. And to be fair it wasn’t all misogyny and racialism; the comics I remember fondly were focused around the vagabond-themes of a man who was about his word, and all that his shadow touched belonged to him. As a freelance story artist, this paradigm rings even more true with me today. 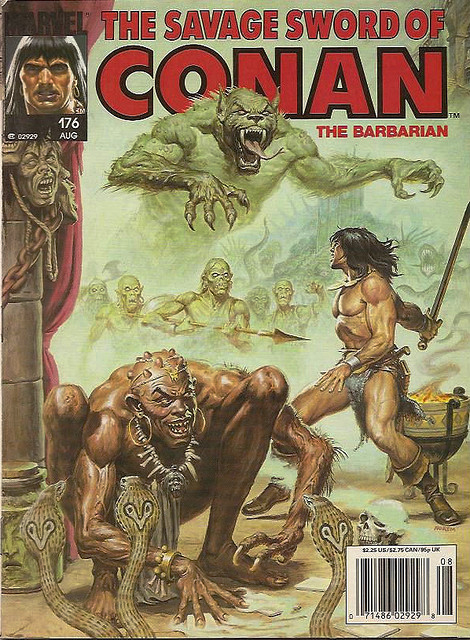 One of the many stories that stands out is issue #176. A shaman captures Conan in an orb of paralysing energy. Revelling in witchcraft mumbo-jumbo, the Witchdoctor uses tarot cards predicting the may ways in which Conan could die. What interested me even back then was that every time the witchdoctor concocted a new scenario where Conan would see a different demise, each scenario had a different render from a different comic artist. The physicality of the individually-rendered alternate scenarios existing in the same narrative was a very unique imagery device. From an ugly, ‘slimy’, wild-eyed Conan fighting the leviathan Dagon futilely, or the fine, detailed artwork of Conan going up against a man-beast that towers over him in a pit of human remains, Conan is made to see his own death, every possible, horrific end. I would read and scan these images continuously. Every line, word and detail. Not to mention the shorter narratives that decorated the back end of these magazines, from King Krull to Picts to Solomon Kane. Brutal stories of blood and iron, revenge and fury.

My love for narrative and art were born on these pages. Kids (you’d think) would have a thing for colour images. But I would get lost in the black and white. And while Conan was by no means a role model, the Savage Sword of Conan made me passionate about art at a young age. To the point I have begun recollecting issues. This time preserved correctly in plastic sleeves, of course. Long live the Bronze Age. Long live the Cimmerian. Long live, Conan, the Barbarian.