So which of the original X-Men is gay?
Advertisement

After getting a lowdown of every X-Men ever in that IGN video, we thought we pretty much brushed up on everything we need to know about the greatest team of mutants ever assembled. But apparently we don’t as one of the original founding members of the team comes out of the closet.

Iceman, who’s powers involve freezing anything he touches, including the moisture in the air, is outed by Jean Gray. The info came out through a series of leaks of comic panels from the coming All-New X-Men #40. Readers discover that the past, teenaged Bobby Drake, who has been transported to the future along with the original X-Men to help solve a crisis, is gay: 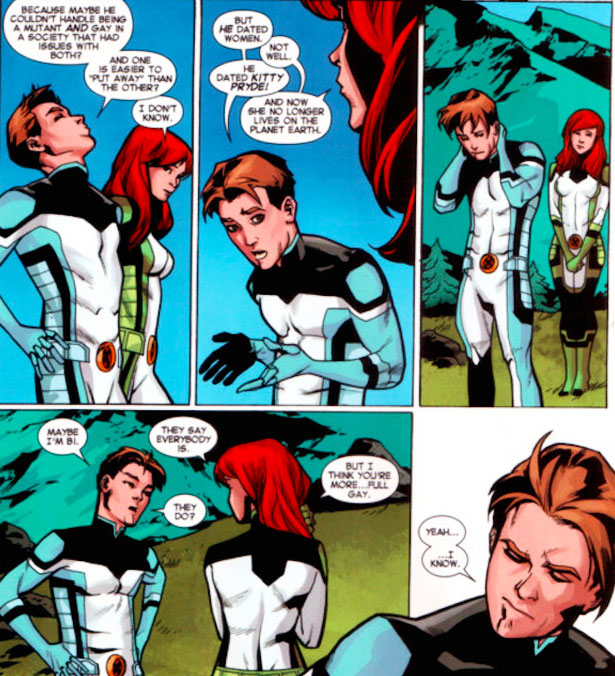 I guess all those previous dates and being with Kitty Pride was a farce then.

The move is one of Marvel appealing to the LGBT community and welcoming diversity among its move prevalent roster of comic heroes.

Brian Michael Bendis talked about his decision to bring out a gay Iceman in All-New X-Men:

There are thousands if not millions of stories of people who, for many different reasons, felt the need to hide their sexuality. The X-Men, with the conceit of time travel, give us a fascinating platform in which to examine such personal journeys. This is just the first little chapter of a much larger story that will be told.

“So what do you think about Iceman coming out? Can we expect other established Marvel characters to follow suit? Who do you think maybe could be next? let us know in the comment section”