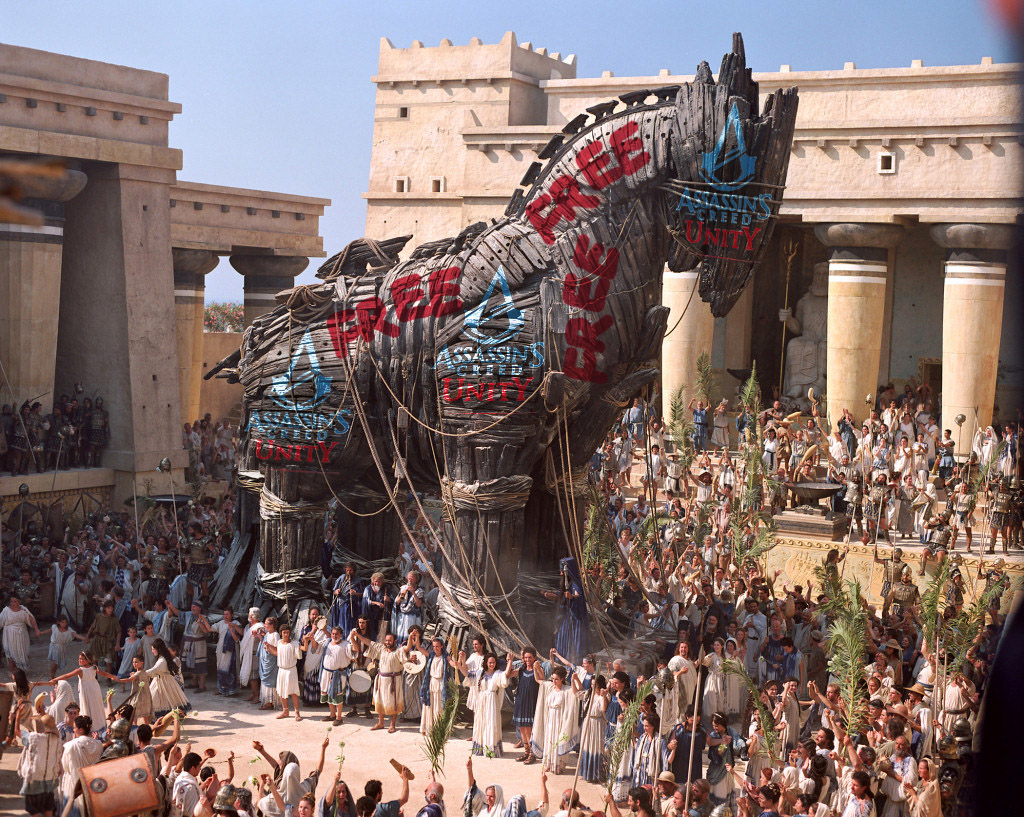 Oh, Ubisoft has been playing dirty again. Surely the execs huddled up with their lawyers and suits to pull this dastardly deed off. What are we talking about? Well, by now you do know Assassin’s Creed Unity has had somewhat a rocky start. From major glitches, the abuse of the ’embargo rule’, 300+ patch fixes with patch 4 being the size of 6+ GB, we thought there would be no end. But then they eventually came around trying to once and for all mend the bridges with the gaming community by offering a new, free game. Fantastic. Oh but, this is where Ubisoft digs into its old bag of tricks trojan-ing a game with strings attached. Accepting the free game, you opt out of being a part of the lawsuit against Ubisoft for their shotty Assassin’s Creed: Unity game. In a nutshell:

You hereby irrevocably and unconditionally RELEASE, WAIVE, AND FOREVER DISCHARGE AND COVENANT NOT TO SUE Ubisoft Entertainment S.A., and each of its past, present and future divisions, parent companies, subsidiaries, affiliates, predecessors, successors and assigns, together with all of their respective past, present and future employees, officers, shareholders, directors and agents, and those who give recommendations, directions, or instructions or engage in risk evaluation or loss control activities regarding the Campaign (all for the purposes herein referred to as “Released Parties”) FROM ANY AND ALL LIABILITY TO YOU, your assigns, heirs, and next of kin FOR ANY AND ALL CLAIMS, DEMANDS, CHARGES, LAWSUITS, DEBTS, DEFENSES, ACTIONS OR CAUSES OF ACTION, OBLIGATIONS, DAMAGES, LOSS OF SERVICE, COMPENSATION, PAIN AND SUFFERING, ATTORNEYS’ FEES, AND COST AND EXPENSES OF SUIT, KNOWN OR UNKNOWN, SUSPECTED OR UNSUSPECTED, ARISING OUT OF OR RELATED TO THE PURCHASE, ACQUISITION, RENTAL, POSSESSION AND/OR USAGE, AND/OR THE INTENT TO PURCHASE, ACQUIRE, RENT, POSSESS AND/OR USE, THE ASSASSIN’S CREED UNITY VIDEO GAME AND/OR THE ASSASSIN’S CREED UNITY SEASON PASS ON ANY AND ALL PLATFORMS, AND/OR RELATED TO THE CAMPAIGN, WHETHER CAUSED BY THE NEGLIGENCE OF THE RELEASED PARTIES OR OTHERWISE.

Fantastic. So while fans took Ubisoft’s gesture as a peace offering, they’ve trojaned a document you essentially signed by downloading and playing. But I guess in all fareness, the games on offer are good:Far Cry 4, The Crew amongst others.

Those who didn’t originally by a DLC pass for Assassin’s Creed: Unity will still be able to get free content in the form of the Dead Kings Expansion Pack. But now you know the strings are attack, you poor no-Ultron ass mofo. We hope the next Assassin’s Creed will have better trailers and gameplay that actually functions right the first time.

Trailed student game is something to behold