With the current feminist explosion championing Marvel’s recent passing of Thor’s hammer to a sultry, tough-as-nails blonde vixen, along with his title, many people thought the age of truly representative comics was finally here. But it seems while Marvel passed Thor’s hammer off to the female successor, the ‘Man’ has been giving the proverbial axe to multiple Marvel Heroines.

On the chopping block, She-Hulk will no longer exist on Marvel’s canon, news that shocked fans a few weeks back. Then Elektra was mushed into the gallows, being cancelled by Marvel as well, one undiscerning observer may think, “It’s just two titles… hardly a massacre.” The comic units sold under the She-Hulk and Elektra title we guess aren’t terribly great by corporate standards, but for fans, they were pretty impressive: in October She-Hulk” #9 sold 21,418 physical copies and “Elektra” #7 sold 15,021. So who’s next? The answer to that may come to you as a bit of a ‘shock’. She’s the heroine that moved comic book units this October that sit snugly between Elektra and She-Hulk‘s numbers at 19,862 units…. Storm.

Yes. Storm. The first ever black female superhero. Ororo “Storm” Munroe was to the comic world what Nyota Uhura was to sci-fi film. A game changer that championed diverse character representation and awesome narratives to boot. But it would seem that not even the commandeer of weather pattern’s is safe, despite Ororo’s heavy-hitter status. 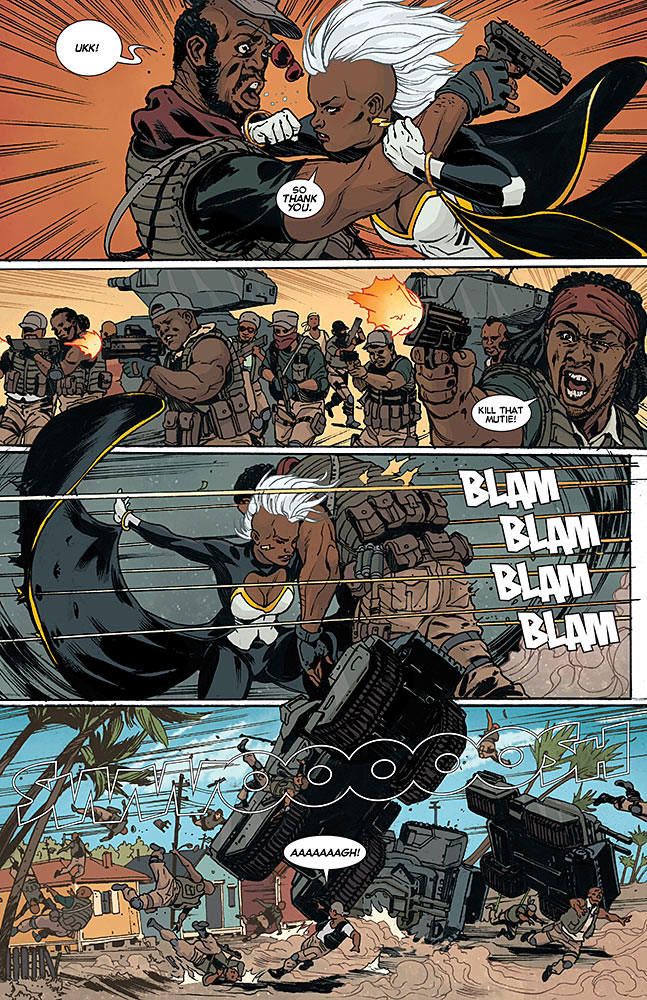 The iconic Marvel Character made her debut in Giant-Size X-Men #1 back in 1975, revolutionising the medium and was an instant favourite, a strong black female character crowned with her iconic white mane and powers once reserved for Greek gods. Nowadays, in her self-titled Storm comic, she can be seen sporting a bad-ass wildly Mohawk, Storm as a standalone title showed great promise and longevity… or at least so we thought.

It would seem Marvel and Disney are preoccupied; Marvel’s efforts to push characters like Captain Marvel and her impending cinematic debut, it seems titles outside the scope of recent Marvel Studios’ endeavours are at risk. And it seems female titles are catching the brunt of this shift from print to film.

What’s most worrying about this is what will happen if Ms. Thor doesn’t move as many units as Marvel likes in the future? Or if Captain Marvel goes ‘dud’ in comparison to their other comic book films slated for production? Or if the Gamora comic title doesn’t take off as expected? In any case, hopefully Marvel wakes up and at least give the currently axed-heroines some screen time in a live-action series or something. Where are the #WomenOfMarvel when you need them…